It would be impossible to interview all of the more than 6,000 patients of Greenhouse Internists, but there is little doubt that virtually all are devastated that the practice has closed. 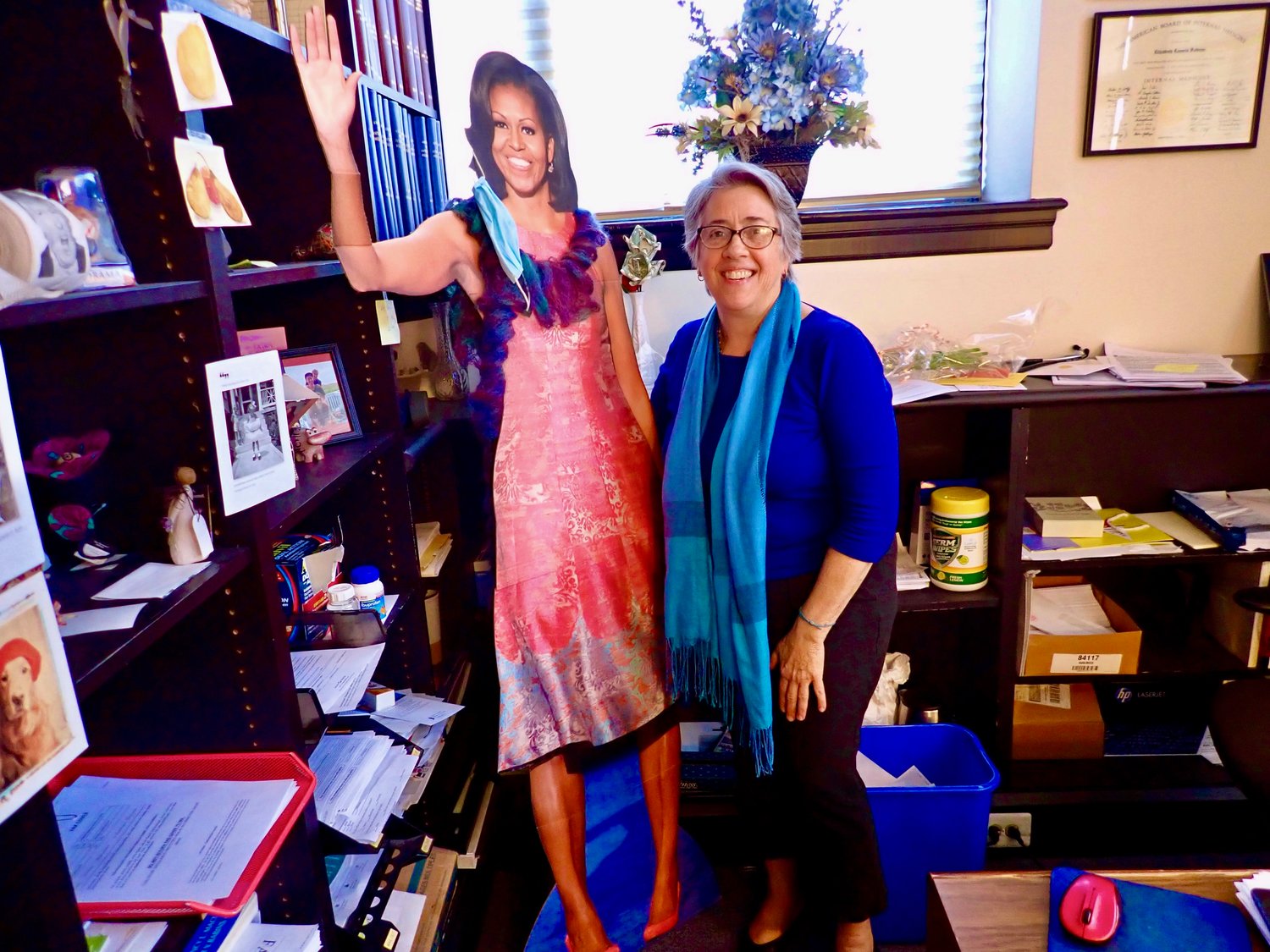 One of Dr. Fabens' favorite memories is the day her staff presented her with a special 65th birthday gift - a cardboard cutout of former First Lady Michelle Obama.
Photo by Len Lear
Posted Wednesday, January 4, 2023 12:00 am
by Len Lear

It would be impossible to interview all of the more than 6,000 patients on file with Greenhouse Internists, but there is little doubt that virtually all of them are devastated by the news that their beloved family practice has closed.

In the 32 years since she first opened her doors at 345 E. Mt. Airy Ave, Dr. Elizabeth Fabens grew her community-based internal medicine practice into the largest family practice in Northwest Philadelphia. Fabens, who named her business after the Greenhouse that once occupied her building, has informed her patients that she is retiring and closing the practice at the end of this month.

Fabens opened Greenhouse Internists in June, 1990, in a building that was previously a florist's establishment. In fact, some of the florist's customers became patients at the clinic. A building addition was constructed in 1994, producing two wings with three exam rooms in each.

It was a difficult decision to close after all these years of building her practice, she said. But she had little choice, as independent practices like hers are all but disappearing these days, with most primary care practices moving to become part of a hospital system.

“I have a 95-year-old mother in Cleveland and a new grandchild, and I want to spend more time with my family, but closing the practice is very hard,” Fabens told The Local. “I tried to find a buyer, but nobody wants to do this anymore, to operate an independent practice that is not affiliated with a hospital. We are a dinosaur, and of course, COVID made matters even worse.”

The Local heard from more than a few of her devastated patients. Eric Corson of Germantown called to tell us that “My wife, Jean, and I have been seeing Dr. Fabens for decades. Her office in East Mt Airy is always packed with patients. She is so beloved because she practices medicine the 'old way.' She takes time with her patients and responds to our concerns by phone and her patient portal. These days, it is amazing that a doctor will get back to patients and respond to our concerns and questions ... She is the most popular doctor in Northwest Philadelphia.”

Lila Bricklin, of Germantown, told us, “Dr. Fabens has played a pivotal role in my small network since 2008, and her shoes will definitely be very difficult to fill. Her care has been invaluable to me, especially her experience and accessibility via the portal. It saved me countless visits and phone calls. And what doc does email over the weekend?”

“Dr, Fabens has been such a gift to the community. I am heartbroken,” wrote Mary A. Harris. “I have valued her gentle, wise, guiding hand in my health over the decades. This is a huge loss.”

“I nearly cried when I saw the news,” wrote Mandi Kidd, and Alisa Kraut put it this way: “What are we gonna do without Dr. Fabens?”

Fabens does not own the building, but it is up for sale. “I think this would make a good restaurant,” she said, “but it would certainly need a lot of renovation.”

Fabens grew up in Cleveland, Ohio, and went to college at Brown University, graduating in 1976. She worked in the healthcare field for several years and then began medical studies at the University of Massachusetts Medical School in 1981. She moved to Philadelphia in 1985 to start her training in internal medicine at The Medical College of Pennsylvania (MCP) Hospital and she has lived in Mt. Airy since then. After internship and residency at MCP, she worked for several years at a city health center in Germantown. She also worked as a medical consultant at the Abbotsford Health Center in East Falls and at the MCP AIDS Clinic, and has taught residents and medical students both at MCP and at Greenhouse Internists.

Dr. Dan Peterson, who has worked with Fabens for 15 years, will be joining a University of Pennsylvania practice in Wyndmoor, and two nurse practitioners who work for Dr. Fabens, Tryphena Hsi and Suzannah Maynard, have also found jobs in the area.

Many of Greenhouse Internists' patients who are seeking new doctors are discovering that some other area practices – including Penn Internal Medicine in Wyndmoor, Penn Family Medicine in Chestnut Hill, Germantown Family Medicine and Mt Airy Family Practice – are accepting certain types of patients, but not all. According to Fabens, the best thing to do is contact those practices directly.

Dr. Fabens has three children – Laura, 34, a graphic designer; Ben, 33, a lawyer, and his twin sister, Ann, a business consultant.

Lila Bricklin contributed to this article. Len Lear can be reached at lenlear@chestnuthilllocal.com