The garden façade of Boxly, designed by Mantle Fielding, overlooking the relocated box hedges. Only part of the house survives today. by George McNeely Digging around in the rich history of Chestnut … 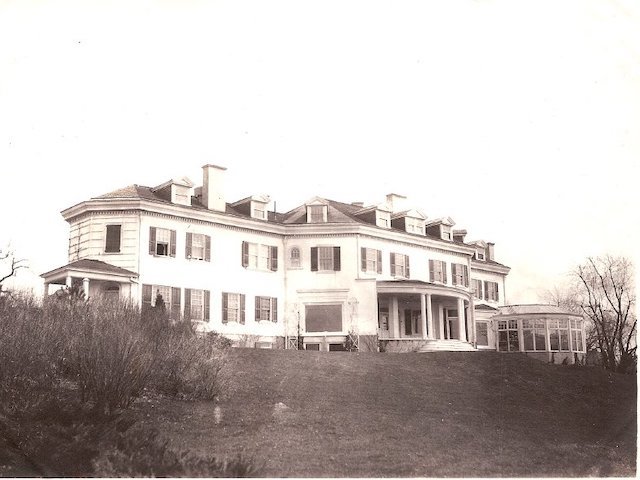 The garden façade of Boxly, designed by Mantle Fielding, overlooking the relocated box hedges. Only part of the house survives today.

Digging around in the rich history of Chestnut Hill and vicinity sometimes takes us on unexpected journeys. That is certainly the case with Boxly, the prominent local estate that survives today in engaging ways.

The most visible surviving part is the house that can be partly seen from either West Gravers Lane or Rex Avenue, grandly overlooking the Wissahickon Valley. It is but a fragment of a far larger house built in 1903-4 by Frederick Winslow Taylor and designed by architect Mantle Fielding, with spreading wings of white stucco and a massive low-slung central portico.

Frederick Winslow Taylor was a mechanical engineer who became the father of “scientific management.” His consulting advice contributed to the successes of such local industrial giants as Midvale Steel and Bethlehem Steel. He became rich and retired early to his estate in Chestnut Hill.

His chosen architect, Mantle Fielding, a graduate of Germantown Academy, had modest architectural training but became a prominent architect, designing such local landmarks as the Germantown Cricket Club and houses in Germantown, Chestnut Hill and on the Main Line. His designs for Boxly were in a subdued, Anglo-American colonial style well-suited for a resourceful Gilded Age entrepreneur in austere Quaker Philadelphia.

Much of that house was later demolished, but a lovely section remains as a private house, with a range of gardens, walls and outbuildings, including the now separately owned house that was originally constructed as the Grape House.

But we must go back to the early 19th century to understand how those pieces connect.

In 1803, John Du Barry, a Frenchman escaping the confusions of the Napoleonic Wars, bought what was then a large tract of land on the west side of Chestnut Hill. He planted numerous mulberry trees in order to participate in the expanding silk industry.

That silk industry began in China several millennia before Christ, but gradually spread west along the Silk Route to new markets, including India, the Middle East, Italy and eventually, of course, luxury-loving France. Each market in turn struggled to protect its trade in the precious substance but inevitably lost control.

The French, notoriously monopolistic, established Lyon as their center for silk production in the 16th century, but then lost control with the disastrous revocation of the Edict of Nantes by Henry IV in 1685, which scattered hundreds of thousands of French (Protestant) Huguenots to England, the Low Countries and The New World. (Religious zealots please take note.) A number of the Huguenots refugees were in the silk industry, and they re-energized the silk business that had been launched by King James I in both England and its colonies earlier in that century.

Industrious Philadelphia farmers and merchants had periodically promoted the local silk trade, including James Logan (of Stenton), Benjamin Franklin and Robert Morris, best known as the financier of the Revolution. Du Barry’s mulberry trees in Chestnut Hill continued that tradition, and many survived through the 19th century as the local silk industry grew.

But unexpectedly, it was his planting of box bushes that created another legacy at Boxly. 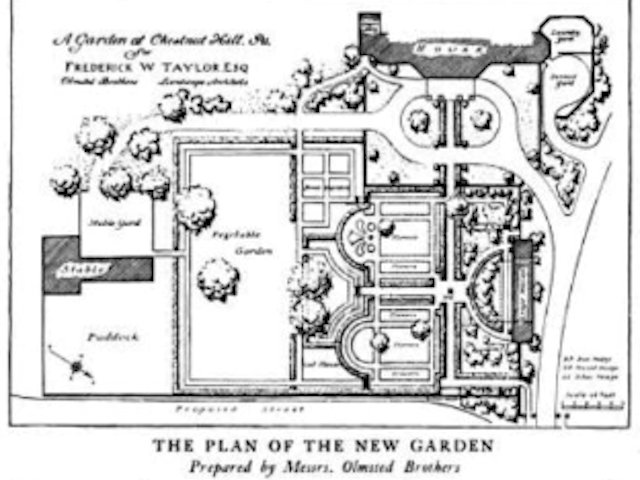 Box bushes originated around the Mediterranean and were reputedly spread to Western Europe by the Romans. They became favorites in Italian and French formal gardens of the Renaissance and Baroque periods, including famously at Versailles. Box had little commercial value, but Du Barry was following his native tradition by planting generous box gardens at his estate in Chestnut Hill.

Those box bushes grew over the century through the subsequent owners. In 1903, when Taylor bought that estate, he engaged the noted New York firm of Olmstead Brothers to redesign his pleasure gardens, including moving those fully-grown and unruly box hedges.

Volume 4 of the “House & Garden” book series, produced by Conde Nast Publishing in 1903, describes at length the transformation of Du Barry’s gardens for Taylor, including the wholesale moving of mature box hedges to better align with Fielding’s impressive new house. The accompanying text and photographs explain that “all of this design was to be with an acre of box, beautifully manicured but of wildly crooked growth.”

The text describes that a “pandemonium of labor now prevails amid a confusion of green verdure, men and horses, freshly turned earth, scaffolding and gear in which only a sharp observer can picture the new garden which is in the making.”

The workmen dug trenches to enclose the huge mature box hedges and their accompanying root balls in rectangular wood frames that were hoisted and moved by horses to the desired new positions. It was a very ambitious (and likely expensive) process that reused those overgrown box bushes in a newly created garden. Taylor was clearly proud of his rearranged box hedges and named his new house “Boxly” in their honor.

Taylor died in 1916 and his dream gardens were then divided. The main house survived for several decades, but was eventually reduced in size.

The nearby eponymous Grape House, built by Du Barry in the early 19th century, featured a long central greenhouse framed by a pair of two-story pavilions perhaps modeled on magnaneries (French sericulture buildings). Descriptions from the 19th century mention that the front of the ensemble was beguilingly overgrown with French climbing roses.

That part of the Boxly estate was later bought by noted landscape designer Frederick W.G. Peck. Peck earned a Bachelor of Landscape Architecture from the University of Pennsylvania in 1933 and went on to design numerous gardens in the mid-Atlantic region, including those at Pastorius Park, Chestnut Hill Hospital and the Kahn-Esherick House. A particular favorite is his design of the famed Azalea Gardens to the west of the Philadelphia Museum of Art. The Chestnut Hill Conservancy honored his legacy in 2012 by organizing a day of tours of his nearby gardens.

He converted the Grape House into a charming residence for his family, overlooking parts of the formal gardens that were reorganized from Du Barry’s original layouts by Olmstead Brothers for Taylor. Peck’s son, noted naturalist, writer and historian Robert McCracken Peck, continues to live there with his family.

We are blessed to live surrounded by such rich natural and man-made landscapes. Winter, when the leaves are down, is an excellent time to explore and admire both architecture and such landscape designs that may normally be hidden from view.