Before volunteers took over the John B. Kelly School library in Germantown, the room was a shell of what had been a vibrant learning center. 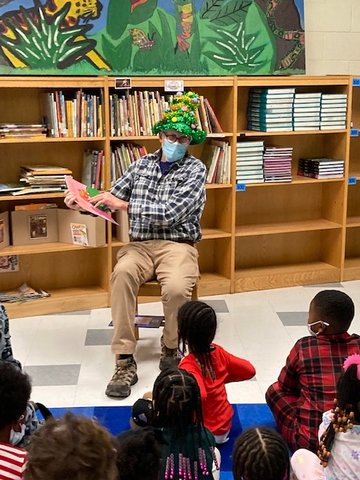 Lots of people are not aware that their kids don’t have functioning libraries anymore.”
Deborah Grill, retired librarian and board member of the Alliance of Philadelphia Public Schools.
by Kristin Holmes

Before volunteers took over the John B. Kelly School library in Germantown, the room was a shell of what had been a vibrant learning center.

The library was like many throughout the Philadelphia School District  – abandoned because of budget cuts.

But then Joan “Penny” Colgan-Davis, a retired school principal, and a team of volunteers revived the library in 2015. When Colgan-Davis died, Corinne Brady took over, enlisting more help, organizing committees and securing donors.

But their efforts were upended by COVID. Since the pandemic, volunteers either have been reluctant to return, aged out, or drifted away from their prior involvement. The setback laid bare what many had already known: Caring neighbors can be a valuable way to keep a school library open, but volunteers can’t replace certified librarians who are paid to operate a library that district officials are committed to maintain.

That is why Brady and public school activists with the Alliance for Philadelphia Public Schools (APPS) and the West Philadelphia Alliance for Children (WePAC) have joined forces to campaign for change. They are lobbying Philadelphia School District officials to begin reopening libraries and staff them with certified librarians, which research shows is important to the academic achievement of students.

To kickoff the effort, a special virtual meeting is scheduled for 7 p.m., Monday, March 14. Presenters will discuss the history of libraries in the Philadelphia public schools, the academic need for libraries with certified librarians and the campaign that is being launched. The meeting is open to the public.

The advocacy initiative will encourage residents to write to their legislators, the school district and City Council to advocate for opening and staffing libraries,” said Deborah Grill, a retired librarian and board member of APPS, a grassroots public school advocacy group.

“Lots of people are not aware that their kids don’t have functioning libraries anymore,” Grill continued, “Or if they are, they don’t know what to do about it.”

The initiative is launching now to publicize the issue as district officials formulate next year’s budget and the search for a new superintendent is underway, said Grill who will lead the meeting, along with Jenny Lowman, executive director of WePAC, a nonprofit that promotes child literacy.

In 1991, the Philadelphia School District employed 176 certified librarians in its more than 200 schools, according to The Inquirer. By late last year, that figure had plunged to fewer than 10. (“In a district with few libraries, this Philly school pulled off a miracle and opened its own,” published Oct. 16.) About 15 district schools have part-time school libraries that are run by volunteers, the story said.

Northwest Philadelphia public schools that have open libraries include the Houston and Emlen Schools. The Henry and Jenks Schools are among those who do not. Jenks’ staff is working on a plan to reopen its library. None of the four have certified school librarians.

Lowman calls the lack of librarians in the Philadelphia public schools “grossly inequitable” and “a travesty” that would not occur in wealthier districts such as Lower Merion in Montgomery County, she said.

“There is no replacement for K to second graders being read to by storytellers,” said Brady, of Chestnut Hill.  “A Chromebook? There is no intonation, no expression, no laughter shared, no role modeling.”

WePAC has provided volunteers to staff schools throughout the Philadelphia School District. Before COVID, the group’s efforts had helped to open 17 libraries. Although the group is working on number 19, only two were up and running this year because of the pandemic and a lack of volunteers, Lowman said.

“As awesome and dedicated as our volunteers are, they are not employees of the school district and not librarians, so we are limited to what we can do,” Lowman said.

In 2020, the Pennsylvania School Librarians Association, proposed a plan to reopen libraries and add more certified librarians into the district, suggesting that a centralized budget fund be created for hiring certified librarians and that schools without librarians compete for funding via a stringent application process.

If the district were to implement a plan, libraries have a lot of catching up to do to match the modern computer-filled media rooms wealthier districts have created, advocates say.

Many Philadelphia public school libraries have become like a time capsule,  Lowman said, “with beautiful award-winning books – from 1990.”

A recommitment to libraries would update their resources and vanquish experiences such as those endured by Michael Horvath, Grill said.

In January, Horvath, a college student from Wilkes-Barre testified in a landmark school funding case which challenges the state’s formula for financing public education. Plaintiffs, including a parent from Philadelphia, contend that the formula that relies heavily on local property taxes is discriminatory and results in unequal funding that leaves less wealthy districts strapped for cash.

Horvath’s school closed its library when he was a student in middle school. When he enrolled in college, libraries were a mystery.

“It hurt my pride a lot to have to ask just how to find a book, which is something you think is so simple,” Horvath said during his testimony. “I think it’s simple but ...I never had the opportunities to learn how to do that.”

For information email kellyschoollibrary@gmail.com. To register for the March 14 event visit  www.bit.ly/apps-wepac.