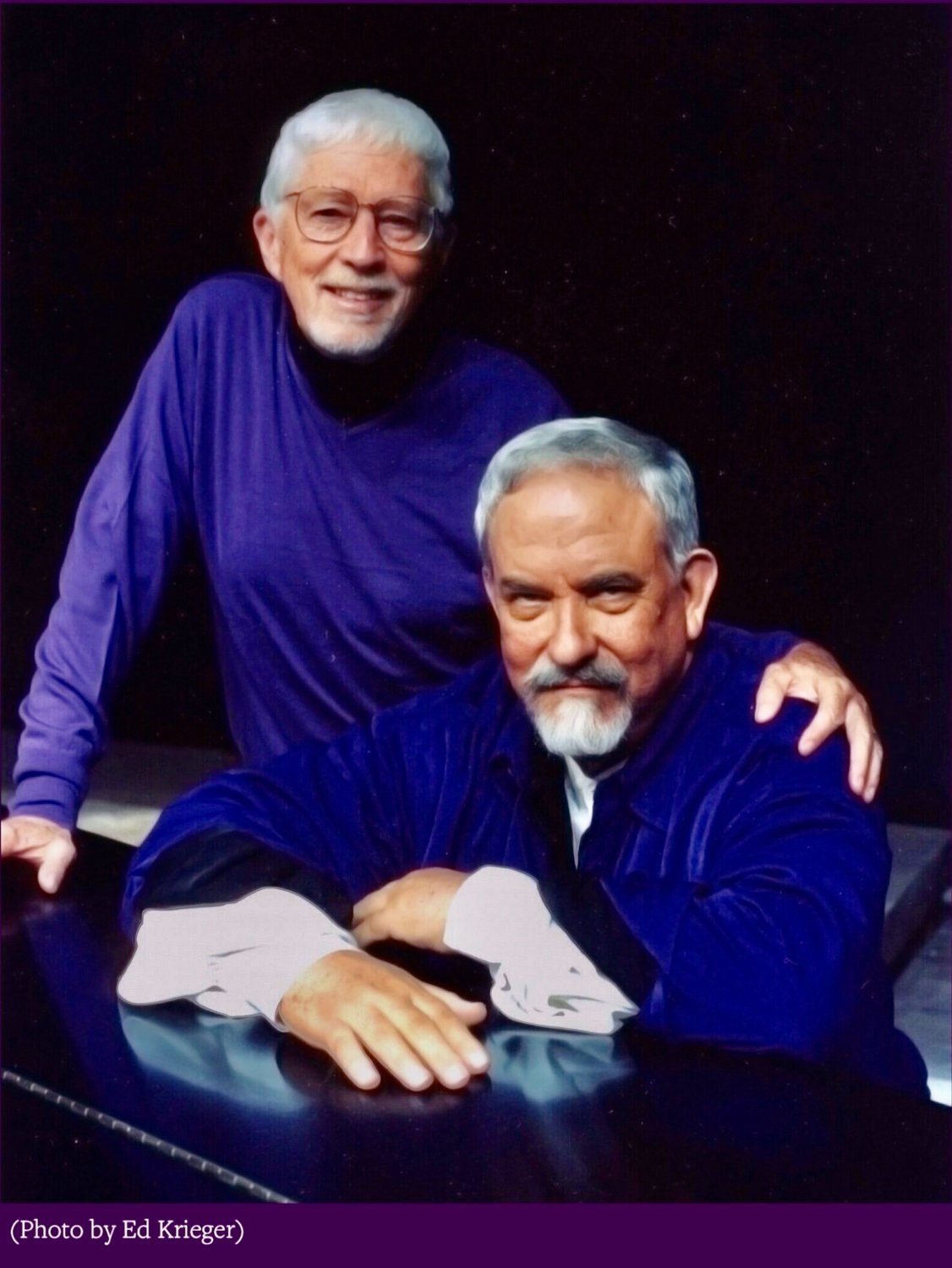 Tom Jones (left) wrote the book and Harvey Schmidt penned the lyrics for “The Fantastics,” now at Old Academy Players in East Falls through May 8. The show's original off-Broadway production ran 42 years until 2002 and 17,162 performances, making it the world's longest-running musical.

Georgette Hamaty, of Glenside, plays a role originally written for a man in “The Fantasticks,” now being staged by Old Academy Players in East Falls through May 8.
Previous Next
Posted Friday, April 29, 2022 6:00 am
by Rita Charleston

“The Fantasticks,” by Tom Jones and Harvey Schmidt, is a funny and romantic musical about a boy, a girl and their two fathers who try to keep them apart. The narrator, El Gallo, asks the audience to use their imagination and follow him into a world of moonlight and magic. The boy and the girl fall in love, grow apart and finally find their way back to each other after realizing the truth in El Gallo's words that “without a hurt, the heart is hollow.”

Filled with such unforgettable numbers as “Try to Remember,” “They Were You,” “Soon It's Gonna Rain” and others, “The Fantasticks” first opened in 1960 and continues to play at various venues to this day, making it one of the longest running musicals in U.S. theatrical history.

Witness the latest production at Old Academy Players in East Falls, which began April 22 and continues through May 8. Glenside's Georgette Hamaty takes the role of Bellomy, originally written for the girl's father, now turned into a part for the girl's mother. “The words are basically the same,” Hamaty said, “but Annie Hnatko, our director, decided to change the gender.”

In her younger years, Hamaty planned on becoming a music teacher and received her bachelor’s degree in music education at West Chester University. “I studied piano and voice, and all went well until I graduated and decided teaching wasn't really for me,” she said last week. “I knew I wasn't really cut out for teaching. I didn't have what it takes. So while trying to find out what I was suited for, I went to work for a temporary agency and landed a job working in the subscription department of the Philadelphia Orchestra. The job was supposed to last for 10 weeks,  but I was there, with various duties and in various departments, for 16 years.”

Later, because of her musical background, Hamaty began singing in classical music choruses, and performed locally and at Carnegie Hall. But in 2014, she decided to take her vocal abilities one step further and started taking classes in dance, musical theater, and improv. “They may be different disciplines, but they're fabulous ways to use whatever talents you have.”

Over the years, Hamaty's talents began to shine, and she was cast in different venues in different roles. Some of her favorites, she said, include Frau Blucher in “Young Frankenstein” and Sister Mary Theresa in “Sister Act.”

The classes she took have helped her to win the roles and succeed in them, she said. “I think my classes in improv were especially helpful. For instance, in 'The Fantasticks' I make choices in how the character should act, and then Annie can decide if they are good changes or not. I often get to bring something to the table that I feel enhances the character, and that's a good feeling.”

While employed as an actress, Hamaty adds that she likes things that are “quick and a little unpredictable” and that she prefers comedy to drama. “But maybe the best fun I have performing is meeting with my cast members. I watch all the people around me who have been doing this longer than I have, and all their energy, talent and credits are amazing. The collaboration is what makes it so enjoyable for me. I find joy and love for this art form, no matter what I'm doing.”

When not on stage, Hamaty said she also finds joy in her work in donor relations at WHYY, as well as her volunteer involvement as the co-chair of Al-Bustan Seeds of Culture, an Arabic arts and culture organization in West Philadelphia.

Hopefully, now that her acting career has begun, Hamaty has her eye on a particular role. “That is Joanne in 'Company,'” she said. “It's a role I'd  really love to play some day.”