Cause for celebration: Friends of the Wissahickon’s 95th year

In the late 19th century, many mills once standing along the Wissahickon Creek were purchased and demolished by the City of Philadelphia to protect the city’s water supply. The Houston and Woodward …

Cause for celebration: Friends of the Wissahickon’s 95th year 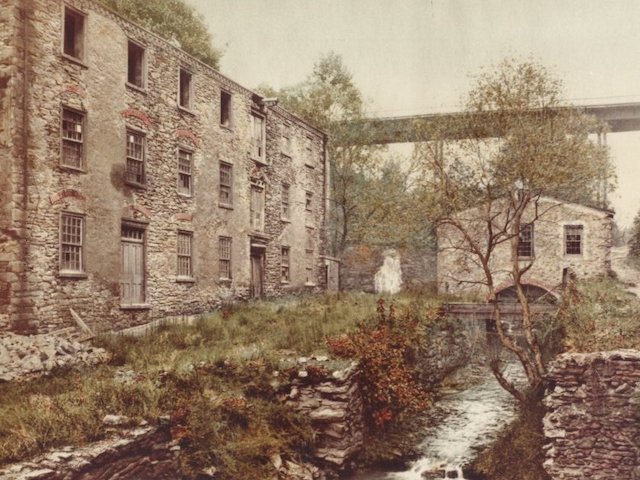 In the late 19th century, many mills once standing along the Wissahickon Creek were purchased and demolished by the City of Philadelphia to protect the city’s water supply. The Houston and Woodward families continued this legacy of stewardship by donating land along Cresheim Creek to Fairmount Park, thus further protecting the water supply and preserving the Cresheim Valley as open space. One such mill, shown here, was the Hill Mill along Cresheim Creek as it appeared around 1900, facing up the creek with the McCallum Street Bridge visible in the background. Traces of the mill’s walls remain visible today. (Photo courtesy of Chestnut Hill Conservancy)[/caption]

by Kevin Hughes and Alex Bartlett

Founded in 1924, FOW is a 2,500-member nonprofit organization that works in partnership with Philadelphia Parks & Recreation to restore historic park structures, eliminate invasive plant species, monitor watershed management issues and restore trails throughout the 1,800-acre Wissahickon Valley Park. For anyone who frequents the park, there are visible signs of the organization’s thoughtful stewardship, care and attention everywhere you look. From erosion control to invasive species management, FOW is always busy taking care of the spaces we love, and it shows.

To really understand the value that FOW brings to the natural environment of the Wissahickon, it is important to think about the Wissahickon Watershed’s early history. During the 18th and much of the 19th century, the structures along Wissahickon Creek and its tributaries were largely industrial in nature, with many mills lining their banks. These mills dumped pollutants into the creeks and threatened the city’s water supply, as the Wissahickon Creek empties into the Schuylkill River, a source of water for the city.

Recognizing this problem, the city began purchasing and demolishing the mills to protect the water supply while simultaneously creating Fairmount Park. The Houston and Woodward families continued this stewardship of the land by donating property along Cresheim Creek and restoring it to its former natural beauty.

If this stewardship of the land had not occurred, it could have left the area looking very different. The natural habitat that exists for birds and other wildlife would have certainly been impacted, the 50-plus mile trail network that so many of us utilize would not be as well-maintained (if constructed at all) and the water quality of the Wissahickon, which provides drinking water for more than 300,000 Philadelphians, would be significantly degraded. I don’t know about you, but for us, those are some pretty shudder-worthy thoughts.

To further protect the water quality of the Wissahickon Watershed, the Chestnut Hill Conservancy and FOW jointly sponsor an easement program for Chestnut Hill, surrounding communities and the Philadelphia section of the Wissahickon Watershed. Established in 1990, the program encourages property owners within the Watershed to donate potential development rights to the Conservancy, assuring that the properties will never be developed or subdivided in the future. Reducing development on properties neighboring the park is an effective way to manage stormwater in the Wissahickon.

As FOW celebrates its 95th birthday, join us in recognizing the exquisite resource the organization is for the Wissahickon Watershed, our community and the Philadelphia area. We are looking forward to another 95 years of tireless effort, expertise and community-focused conservation work, and applaud them on a job well done thus far.

Kevin Hughes is conservation & easements manager and Alex Bartlett is the archivist at the Chestnut Hill Conservancy.