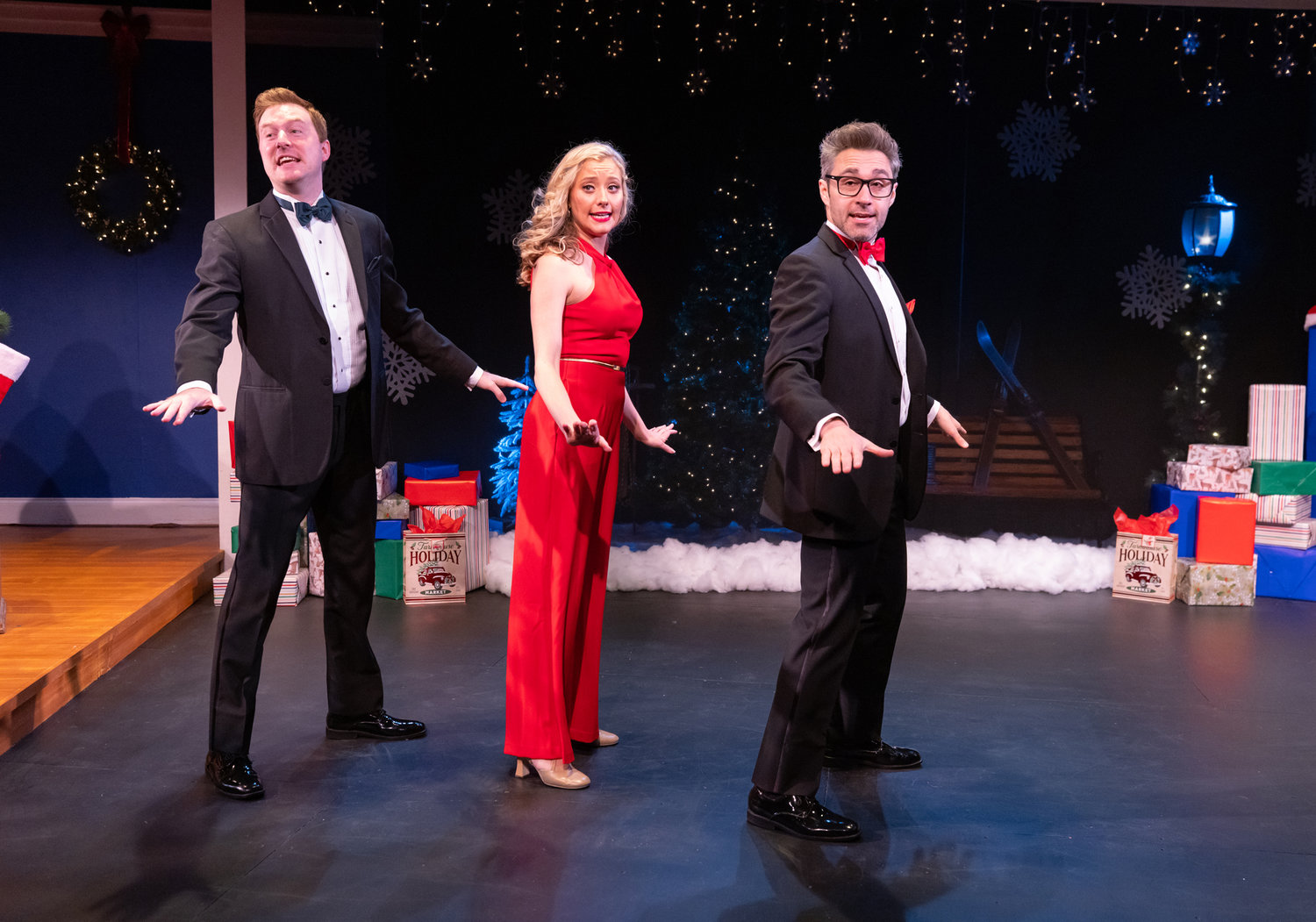 (From left) Zachary Chiero, Renee McFillin and Michael Indeglio star in “Cole for Your Stocking” at the Act II Playhouse in Ambler through Jan. 1.
Posted Thursday, December 15, 2022 12:00 am
by Hugh Hunter

A musical revue of Cole Porter? Where do you start? The number of Cole Porter songs that are now jazz standards is staggering. Director Dallas Padoven and artistic director Tony Braithwaite take a festive approach in the Act II Playhouse world premiere of "COLE for your stocking."

Scenic designer Parris Bradley decks out the stage for Christmas. Behind a rear screen you see an ornamented tree, while the front set is ablaze with color, and lighted wreaths are everywhere. But center stage is bare because Act II song and dance folks need a lot of room.

Effervescent hoofers Renee McFillin, Michael Indeglio and Zachary Chiero light up the theater and lighten up Cole Porter as well with their comic sensibility. Joyous in their interactions with each other, they also reach out to the audience and evoke shout-outs all night.

Chiero performs the first solo, "Easy to Love" from the movie "Born to Dance." It is a good choice because this composition sums up the essence of Cole Porter's songwriting: sparkling wit and urbanity that upstages an underlying sadness.

The chorus starts out with "For you'd be so easy to love/So easy to idolize all others above/ So sweet to waken with/ So nice to sit down to eggs and bacon with." You are so delighted with the comic ambiguity of  "to eggs and bacon with" – it could be a verb form – you are in no mood to hear what comes next:

"We'd be so grand at the game/So carefree together that it does seem a shame/That you can't see/ Your future with me/ 'Cause you'd be, oh, so easy to love." Hey, this guy is in the dumps! How can he be the same fellow who has so much fun with bacon and eggs?

In passing, you learn bits and pieces of Cole Porter's life, sometimes in asides from music director and pianist Dan Matarazzo. Porter’s wealthy grandfather sent him to Yale to become a lawyer but he studied music instead; he lived in the Waldorf Astoria for thirty years; he was gay and in the closet.

There is also a work-up of "Kiss Me Kate" (1946), the only time Cole Porter won a Tony. At first, I found it strange that Act II would take a pass on standards like "From This Moment On," in favor of obscure numbers like "Brush Up Your Shakespeare" and "I Hate Men."

But I can guess why. Beginning with "Oklahoma'' in 1943, musicals changed. Previously, a tissue thin story was only a pretext for song and spectacle. Rodgers and Hammerstein showed how music could be integrated with drama. "Kiss Me Kate" was the first time Porter accepted the challenge.

And yet with musicals like Can-Can (1953) he soon returned to the spectacle approach. His songs just jump out of trivial storytelling to take on a life of their own. The quick-paced, 65 minute Act II show is long enough to give you a good taste of just how special they are.

The Act II production is the perfect Christmas present. Songs like "I've Got You Under My Skin," "Let's Fall in Love" and "I Get a Kick Out of You" stir up buried memories. You have heard them many times before, but to steal a song from "Babes in Arms" (1937) by Rodgers and Hart, you cannot quite remember "Where or When."