Emilie “Kayo” Rivinus Brégy, a former Chestnut Hill resident, must be the oldest active portrait painter in the U.S. She celebrated her 102nd birthday in August 2022. 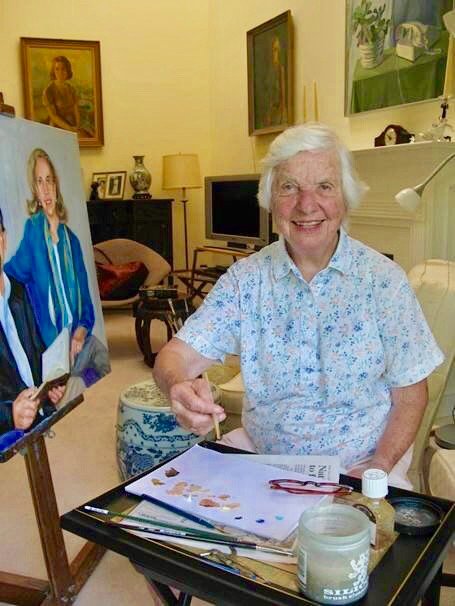 Brégy has been creating acclaimed oil and watercolor paintings, both abstract and representational, for more than 75 years.
Posted Thursday, January 12, 2023 12:00 am
by Len Lear

When Jack McMeekin invited me to a Christmas party at his sprawling home near Woodmere Art Museum, it was not for the food and wine. He wanted me to meet one of his guests.

“You just have to meet the artist who painted the five family portraits that are on the walls here,” he told me. “I can assure you that she will make a great story for you.”

That was an understatement. Emilie “Kayo” Rivinus Brégy, a former Chestnut Hill resident who has lived at Cathedral Village in upper Roxborough for the past 20 years, must be the oldest active portrait painter in the U.S. She celebrated her 102nd birthday in August 2022.

“I had stopped doing portraits,” Brégy told me recently, in a strong, clear voice. “But then people at Cathedral Village would ask me to paint them, and I could not say no, so I am still doing them.”

Brégy’s just fine with that. “That's OK because I actually feel uncomfortable when I am not painting,” she said.

Brégy, who said she has “loved every bit” of her life and still walks without a cane or walker or any other kind of assistance, was once a popular presence on Germantown Avenue, where she knew virtually everyone she encountered. And while it’s been decades since she’s lived in the neighborhood, she still wears a permanent smile on her face and is an inspiration to all who meet her.

“You should see this lady swing a golf club,” said Charlotte Betancourt, a Chestnut Hill resident for 46 years and a long-time friend. “She played tennis into her 70s and then golf for 25 years into her 90s.”

She is also a true child of Chestnut Hill, having been born and raised in the neighborhood. She picked up her nickname “Kayo” on summer trips to Maine, while attending Beaver Summer Camp.  More than 90 years later, she said, “Everybody still calls me that. It stuck.”

A member of the 1938 class of Springside School, Brégy also attended the now-defunct Ravenhill Academy in Germantown, and then a convent in Connecticut. She did not graduate from any of those schools – but she did spend a year in Italy as a young adult, which sparked a life-long appreciation for art.

Her time in Italy prompted her to take courses at both Temple University's Tyler School of Art and the Pennsylvania Academy of the Fine Arts. She did not graduate from either of them, either. “I am not a graduator,” she said with a smile. But she did have a 25-year career as a guide at the Philadelphia Museum of Art.

In addition to Brégy's public figures, her informal family portraits of men, women and children, often posing with their pets, hang in countless Philadelphia area homes. Each portrait involves at least five sittings, she said.

Her paintings also document trips to India, Thailand, Japan, Yemen, Italy, Spain and Mexico, and she has painted numerous watercolor landscapes of the Maine coast.

Brégy, whose favorite artists are Matisse, Wolf Kahn and Oscar Bluemner, also plays with different styles. She will paint a photographic realism landscape and then an abstract rendering of the same scene, such as a rocky shoreline.

Brégy was married for 47 years to Philip Brégy, one-time lawyer for Drinker, Biddle & Reath, who died in 1988 at age 75. “We had a group of friends who called ourselves 'The Finer Minds of Philadelphia,'” she said. “We used to take walks in the Wissahickon with golden retrievers and cocker spaniels.”

Brégy is a first cousin of F. Markoe (“Koey”) Rivinus, who died in 2006 at his home in Chestnut Hill at age 91. His wife of 68 years, Anne Hutchins Rivinus, died in 2010 at age 94. Koey and Anne were both local legends for planting countless trees and numerous other beautification projects in and around Chestnut Hill and the Wissahickon Valley.

They’re not the only family members she’s proud of.

“My uncle, Eli Kirk Price, was one of those responsible for the development of the Parkway and the Art Museum. He would deliver Christmas presents in a horse and carriage,” she said. “My grandmom, Elizabeth Price Martin, was the first president of the Garden Club of America.” Brégy’s mother, Marion Willis Martin, served as president of the Morris Arboretum Association and was a longtime member of the institution’s Advisory Board of Managers.

Bregy’s father, Edwin Rivinus, was a lawyer. She had four siblings, of which the only one living is Willis, 90, who lives in Bucks County. She has four daughters: Anne in Syracuse, Phyllis in Buffalo, Joan near Boston and Carol in Willow Grove. “I've lost count of the grandchildren,” Brégy said.

For more information, visit emiliebregy.com. Len Lear can be reached at lenlear@chestnuthilllocal.com