In men's basketball, Chestnut Hill College had been seesawing back and forth across the .500 mark for much of last month, but a victory in the Griffins' first contest of 2023 was their third win in a row. 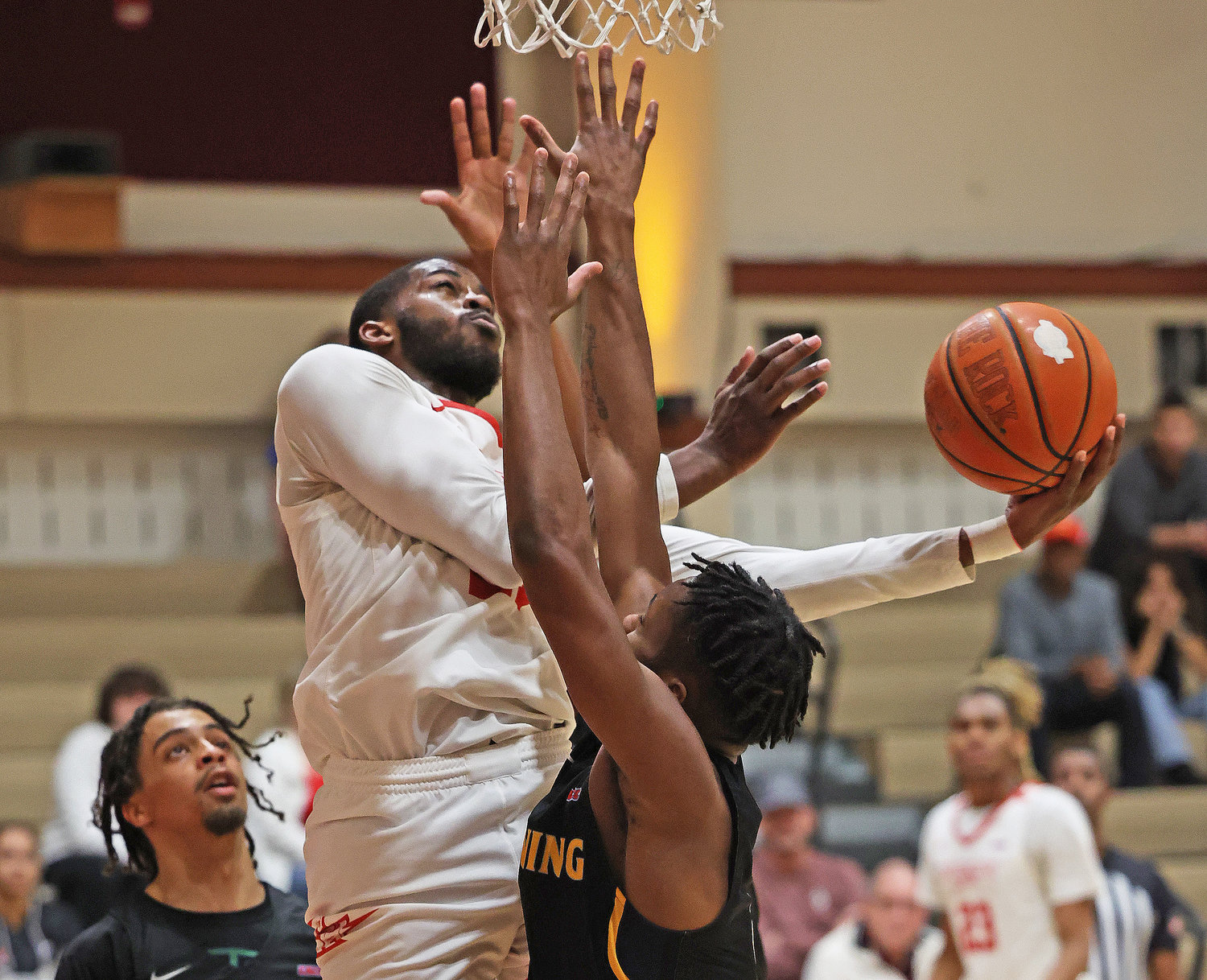 Chestnut Hill College's Amir Warwick guides the ball around a defender to make a lay-up. He scored his 1,000th career point as a CHC Griffin on a free throw in the first half.
Photo by Tom Utescher 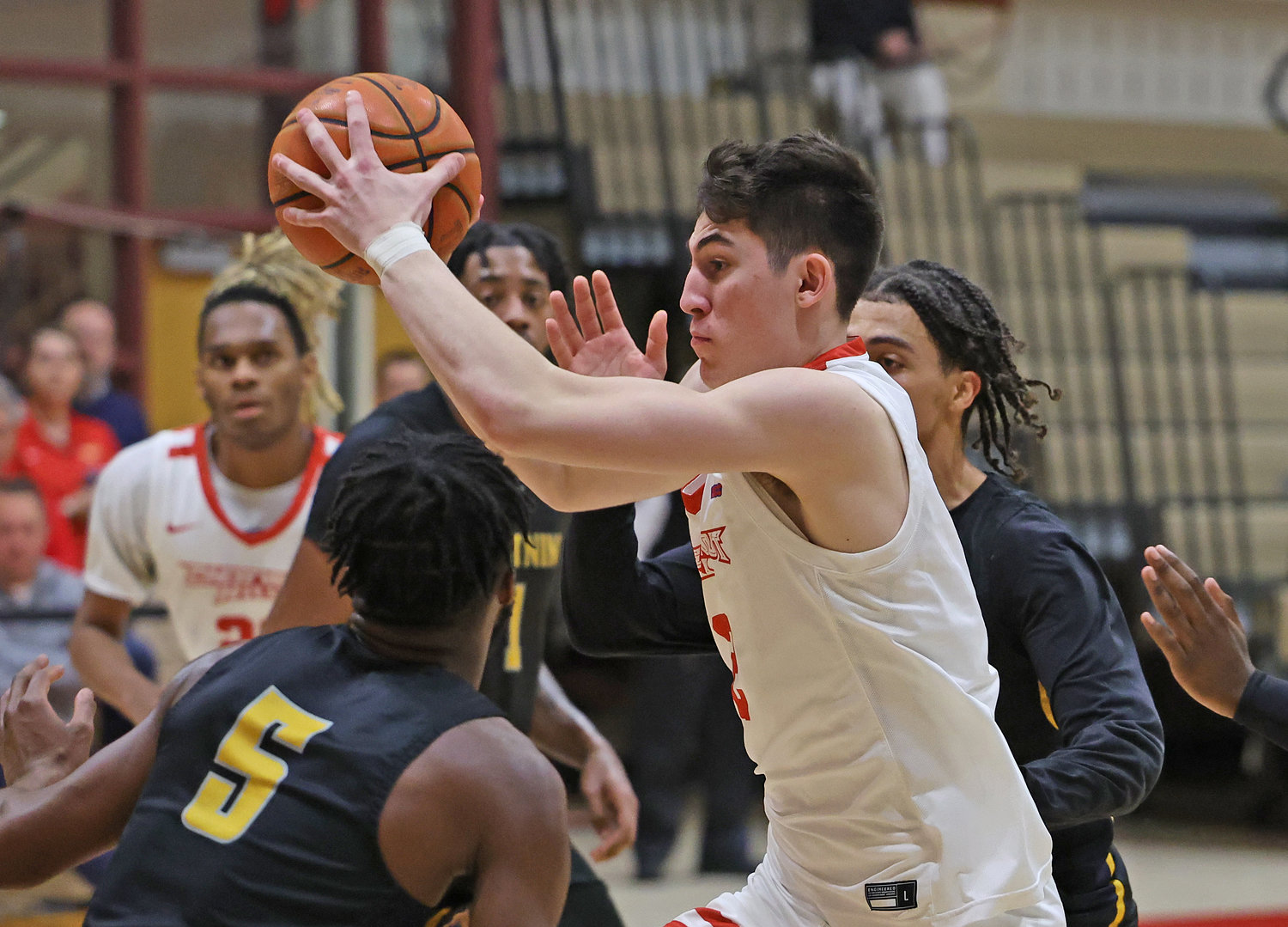 MJ Iradi, a CHC sophomore, was fouled and knocked down on this drive to the basket. After a break, he was able to resume play.
Photo by Tom Utescher
Previous Next
Posted Thursday, January 12, 2023 12:00 am
by Tom Utescher

In men's basketball, Chestnut Hill College had been seesawing back and forth across the .500 mark for much of last month, but a victory in the Griffins' first contest of 2023 was their third win in a row and raised their record to 15-13 overall.

With an 87-84 overtime victory over Delaware's Goldey Beacom College last Wednesday, host CHC also improved to 12-7 within the Central Atlantic Collegiate Conference. Chestnut Hill was ahead most of the way, although the gap never grew larger than seven points and the visiting Lightning edged ahead a few times late in regulation play. The game went into overtime with a 71-all tie on the board.

CHC guard Amir Warrick, a graduate student using his extra year of eligibility due to COVID shutdowns, scored a game-high 24 points. He passed the 1000-point career scoring milestone in the first half, becoming the 10th player in program history to accomplish the feat.

The Griffins also got 19 points from guard Trevonn Pitts, a senior out of Cheltenham High School whose three-point "and-one" play created the 71-71 stalemate that sent the game into OT. Also in double figures were grad student James Rider IV (14 points) and sophomore Noah Charles (10).

Warrick began the game needing 11 points to reach 1000 for his CHC career. He started right in with a lay-up in transition and a short bank shot for the Griffins' first four points of the game. Rider drilled a pair of three-pointers from the right side, then Warrick scored again in transition, forcing a time-out by the Lightning as they trailed 12-6 five minutes into the game.

Chestnut Hill maintained a modest lead as the Warrick watch continued. As the contest progressed into its second 10 minutes, he deposited two more lay-ups to reach 999 points. It looked like he might get into four figures with a short jumper from the lane, but he was fouled and the shot fell short of the rim. He would get his 1000th point on the first of two free throws with 4:41 remaining in the first half.

Warrick had the first field goal of the second half to make it a seven- point margin, and the Griffins again led by seven a few minutes later. Goldey Beacom then surged into a 52-52 tie, and there was little separation between the teams after that.

The visitors held a 71-68 edge when, with 1:25 on the clock, CHC's Pitts was fouled on a drive down the lane and made both his lay-up and the free throw that was added on. Later, the Griffins started a possession with 18 seconds on the clock, but turned the ball over tin the final seconds of regulation and the bout continued into overtime at 71-all.

With a little over two minutes left in the five-minute OT, the teams were even again at 78-78. A midrange jumper by Pitts was followed by a three-pointer by the Lightning, then Charles, the CHC sophomore, responded with a trey of his own.

With 44 seconds left, Goldey Beacom gained its last lead, 84-83, on a baseline shot and accompanying free throw. Charles again stepped up from the outside; his three-point bucket from the left corner moving the hosts ahead, 86-84.

Next time down the floor, a shot by the Lightning missed and Chestnut Hill freshman Adam Angwafo won a scramble for the rebound. He was fouled, but missed both free throws with four-and-a-half seconds remaining. Going after the second miss, Pitts was able to slap the ball into a Goldey Beacom player and out-of-bounds.

When he received the CHC inbounds pass himself, Pitts was fouled and made the second of two shots, putting the 87-84 final score on the board with 1.9 seconds to play. Goldey Beacom's last inbounds pass was intercepted by Charles for the Griffins.