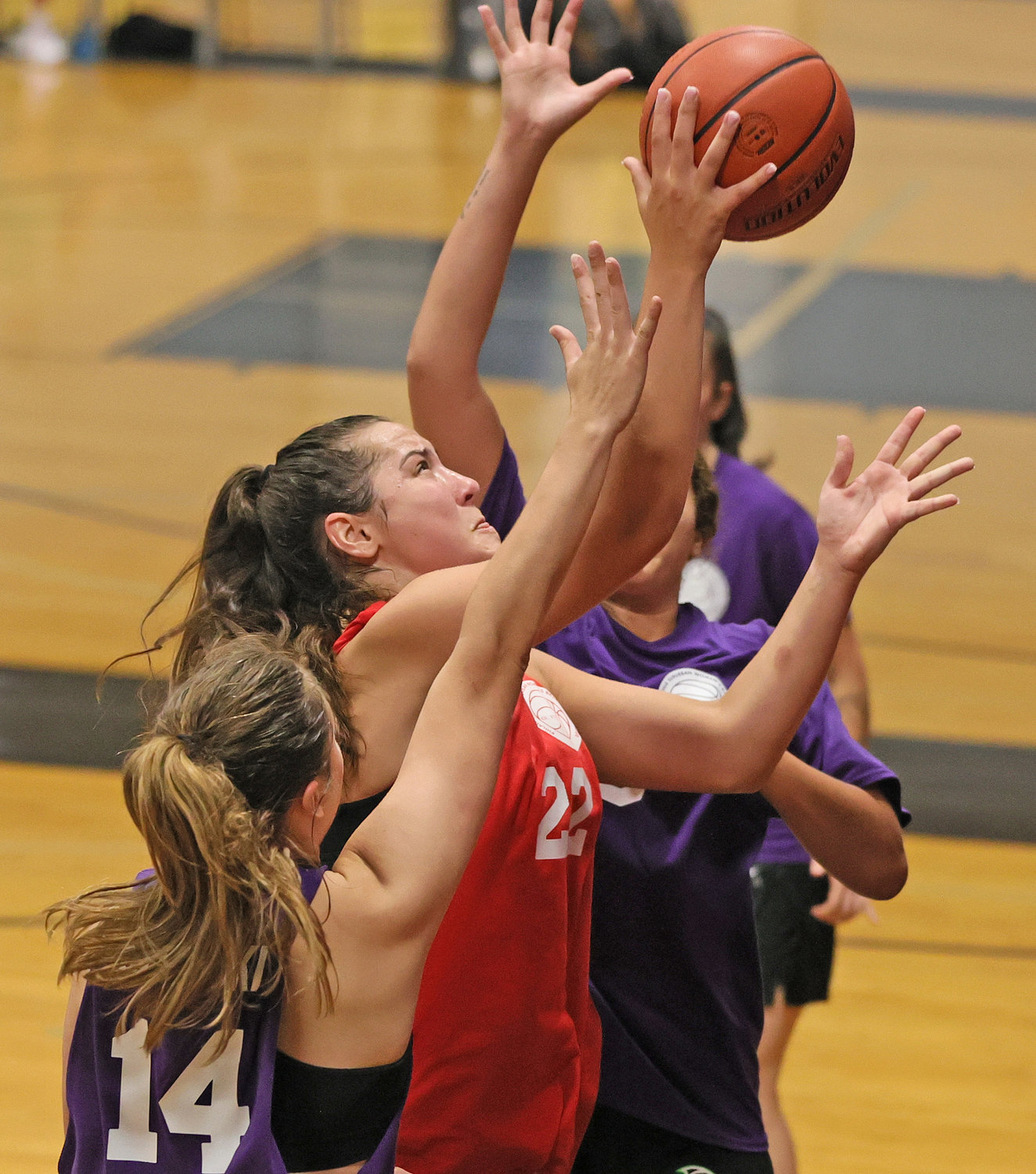 Chestnut Hill College sophomore Emily Chmiel powers up a shot from the paint during a game back in June. Photo by Tom Utescher 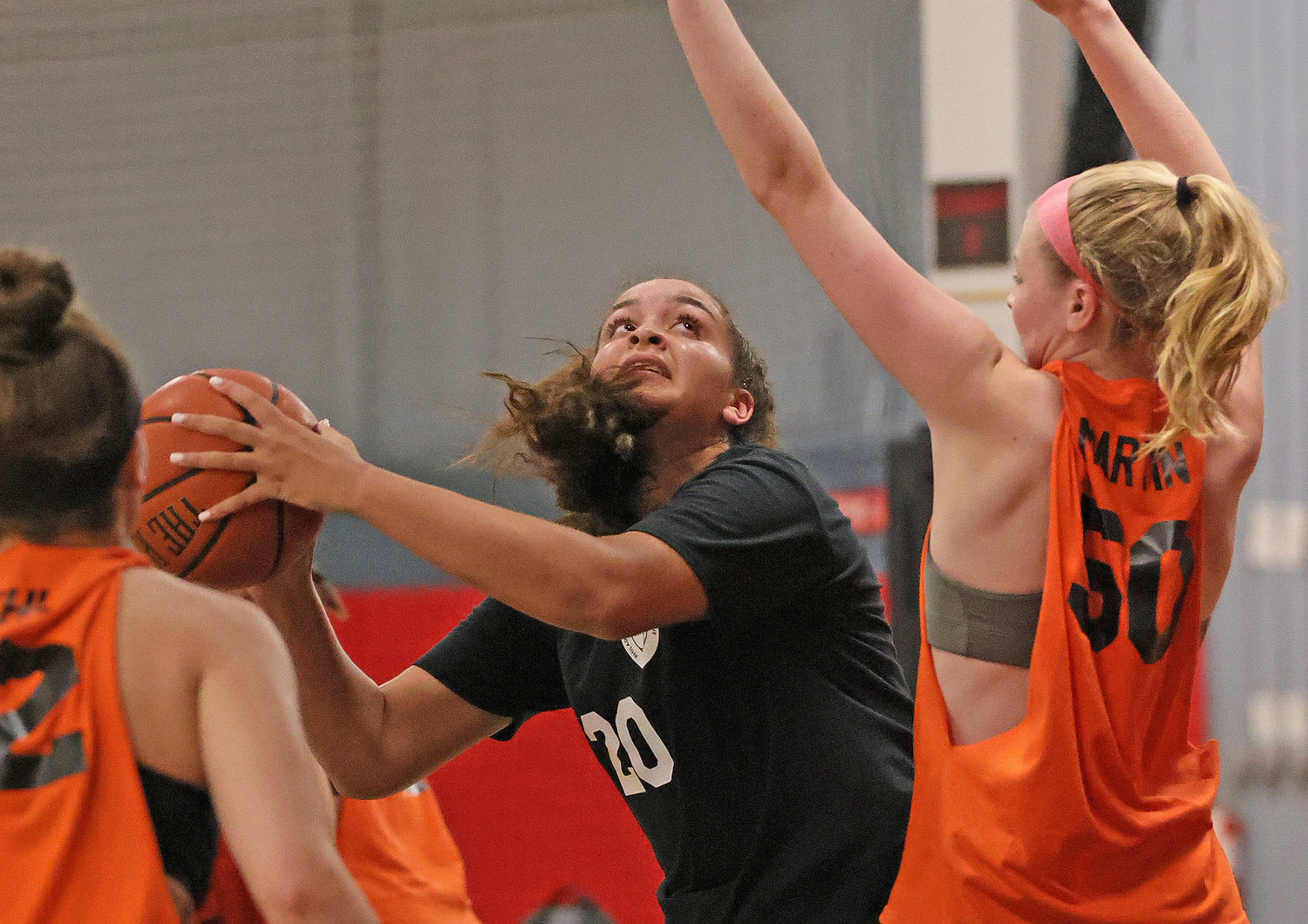 Two nights later, the hot weather Griffins avenged a loss in last year's league finals, recording a 58-49 victory over Team Heather Maroon, which is made up of University of the Sciences alumni. All the above schools, along with Jefferson University (Team Black in summer ball), belonged to the CACC in NCAA Division II, but as of the end of the 2021-22 academic year, USciences ended its athletic program as it merged with Division I St. Joseph's University.

Team Heather Maroon had been in first place by itself since the start of the season, but its loss to CHC Red on Thursday dropped it into a three-way tie for first with Chestnut Hill and with Team Pink (Division II Kutztown University. All three have records of 6-2, while just below them are three squads at the 5-3 mark, Black, Columbia Blue, and Team Purple (Division II West Chester University).

Two squads made up of players from many different schools, Team Kelly Green and Team Sun, were tied for seventh place at 3-5. Both teams have a Germantown Academy alum on the roster, Alexa Naessens (Colgate University '22) for Kelly, and Caitlyn Priore (Gettysburg College '24) for Sun.

Sisters Sarah and Charlotte DiLello are GA grads who are a rising junior and a rising sophomore, respectively, at Division III Ursinus College. As Team Orange, the Ursinus squad had a record of 1-7 at the end of last week, just ahead of 0-8 Team Royal Blue (Division III Arcadia University).

After its first loss of the season (to Kutztown Pink) on June 30, Team Heather Maroon won on Tuesday of last week, moving up out of a 59-59 tie in the middle of the fourth quarter to prevail against Purple, 72-62.

On the same night, CHC Red engaged in a CACC battle with Holy Family Columbia Blue. After the teams were tied at 15-all at the end of the first quarter, Columbia led both at halftime and at the three-quarter mark (40-36).

In the middle of round four, the Blue team was up 33-30, and then Red began a decisive push. Freshman Sara Tamoun, who had put in a field goal earlier on, now sandwiched a pair of three-point buckets around a Holy Family lay-up. The second trey nudged CHC ahead by one point, and when Signorina Chmiel scored from the paint, Columbia called time-out, now trailing 38-35 with 1:08 remaining.

CHC senior Bri Hewlett exchanged single free throws with an HFU player; the Columbia foulshooter missed her second shot and Tamoun grabbed the rebound for Red. Fouled in turn, the CHC freshman missed two free throws, but her senior teammate Morgan Orloski rebounded the second shot and was also fouled. She made the first of her two free throws for a 40-36 tally with 13 seconds left, and when Columbia came back up the court they turned the ball over on the right sideline.

Tamoun finished with 11 points for the winners, and on the inside sophomore Emily Sekerak scored nine points and Chmiel had eight.

This was one of the late games on Tuesday; on the same court in an early contest Jefferson Black met unexpectedly stiff resistance from Ursinus Orange before securing a 61-53 victory. Black was missing a few veteran players, but still had most of its regular line-up. Charlotte DiLello scored six points for the Orange.

Two other former Patriots were in action on adjacent courts. On court three, Priore scored 10 points to reach double figures for the first time this summer as her Team Sun notched a 67-35 win over Team Royal Blue. Fellow GA alum Naessens scored six points for Kelly Green, but her squad succumbed to Team Pink, 44-33.

Both Jefferson Black and West Chester Purple had to play two games on Thursday since they'd had an earlier game against one another postponed. First, the two teams met head-to-head in the early session, and Team Black was never really in the game after falling behind 15-0 early on.

Purple was up 46-11 at the half and rolled to an 83-40 triumph. Black's team high of 11 points came from senior guard Emily Keehfuss.

In the second round of Thursday games, Purple posted a 66-59 win over Kelly Green, which received four points from Naessens. Team Black overcame Sun, 53-45, with sophomore center Cassie Murphy leading Jefferson with 16 points while Priore put up seven points in the losing cause.

When the two "Blue" teams squared off, the outcome was not a surprise, as Division II Columbia downed Division III Royal, 80-29. Kutztown Pink got more pushback from Ursinus Orange, but still won, 62-47. Orange received five points from Charlotte DiLello and two from her sister Sarah.

In the marquis match-up between CHC Red and Heather Maroon, the USciences alums hit three early treys and went up 11-0, but they were outscored 58-38 the rest of the way. It was senior guard Abby Spratt who finally got the Red offense going five minutes into the contest. Chestnut Hill was back within a point by the end of the first quarter, though, with freshman guard Avery White heaving a buzzer beater three-quarters the length of the court to make it 13-14.

Five different Griffins scored in the second period to give Team Red a 25-19 lead with two minutes left in the half, but Maroon finished with a pair of lay-ups that made it 25-23 at the break.

Chestnut Hill was missing a pair of guards who can strike from long range (Orloski and senior Lauren Crim), but during the game five other Griffins made one or more three-pointers. Also absent was Sekerak in the low post, which meant that when Chmiel was off the floor CHC had no one of similar height in the game. Maroon wasn't able to take advantage of that, since it was missing its most powerful player in the paint, Taylor Hamm.

Chmiel scored all of her nine points for the night in the third quarter, and four other Red players found the hoop to allow CHC to take a 44-37 advantage into the fourth period.

Midway through the final frame the lead was still at seven (51-44) when Maroon sank a "three" to get within four points. The Griffins quickly responded with a 7-0 spurt that consisted of a mid-range jumper by Tamoun and a three-pointer and a lay-up by Hewlett.

Chestnut Hill led 58-49 going into the final minute and had possession of the basketball. There is no shot clock in the summer league, so with no feasible path to victory, Maroon conceded with 50.9 seconds still on the clock.

A group of closely-bunched scorers for the victors was led by Hewlett, with 10 points, Chmiel with nine, Spratt and Tamoun with eight apiece, and White and Siobhan Boylan with seven points each. Penn Charter grad Kait Carter ('20) added four points for CHC Red.