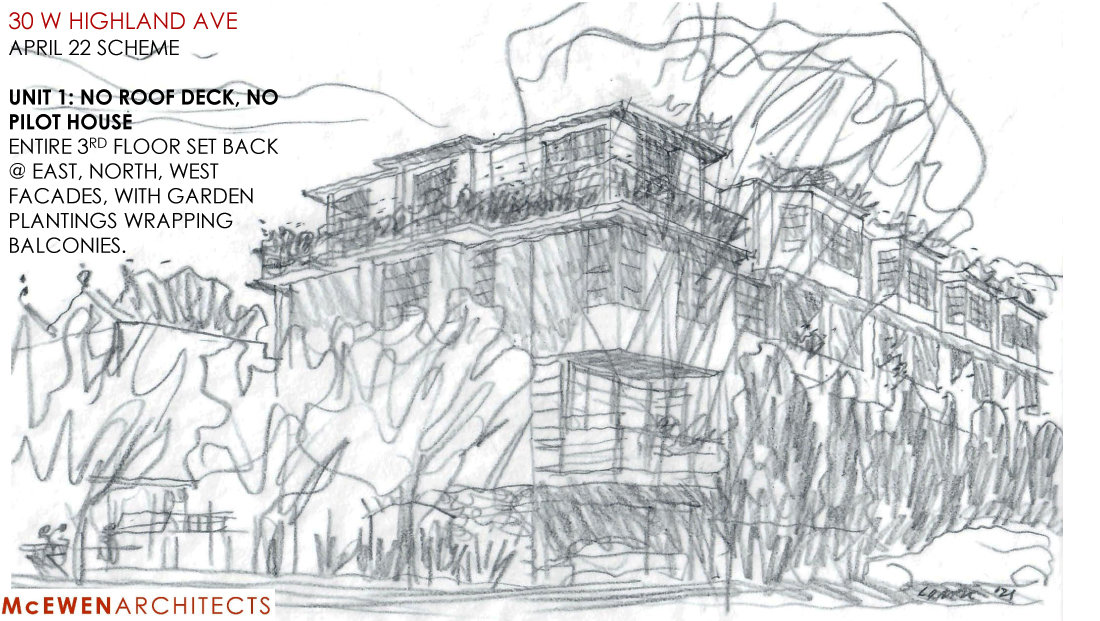 The latest changes to the April 12 design involved lowering the profile of the first unit on the Highland Avenue end: Setting the third (top) floor back further on the east, north, and west sides and removing the roof deck, pilot house, and associated railings above the cornice of the roof at 38 feet. In addition, there would be more planting on the street side and the west edge of the third floor, and along the west edge of Units 2-6 at the Roof Garden Level, to address the concern about views from the roof decks to neighboring properties. (Artists rendering by Laurence McEwen, architect) 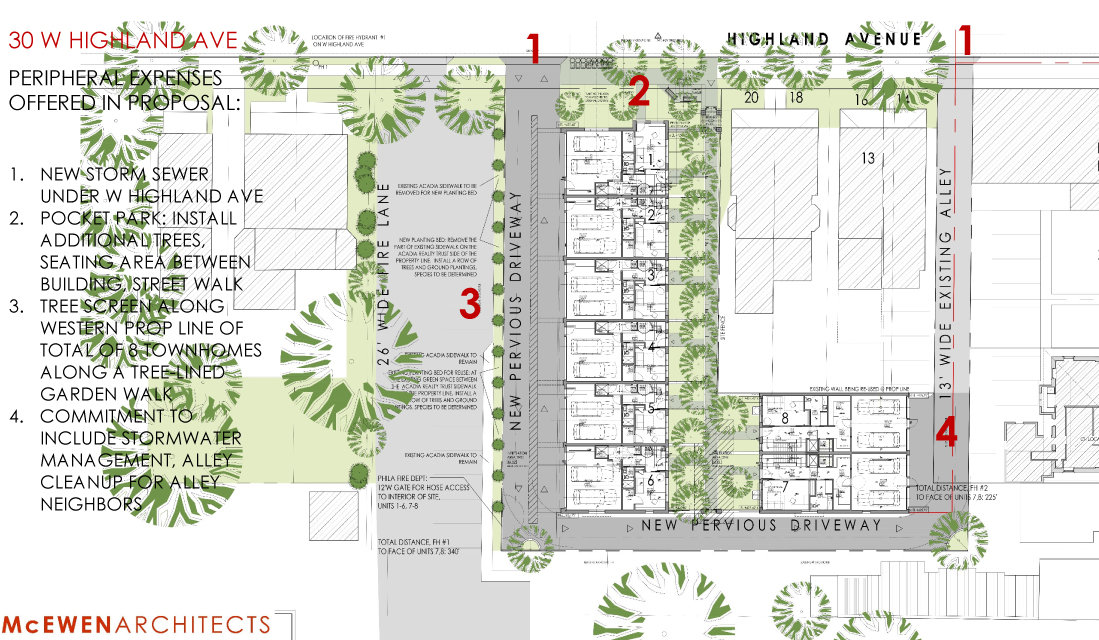 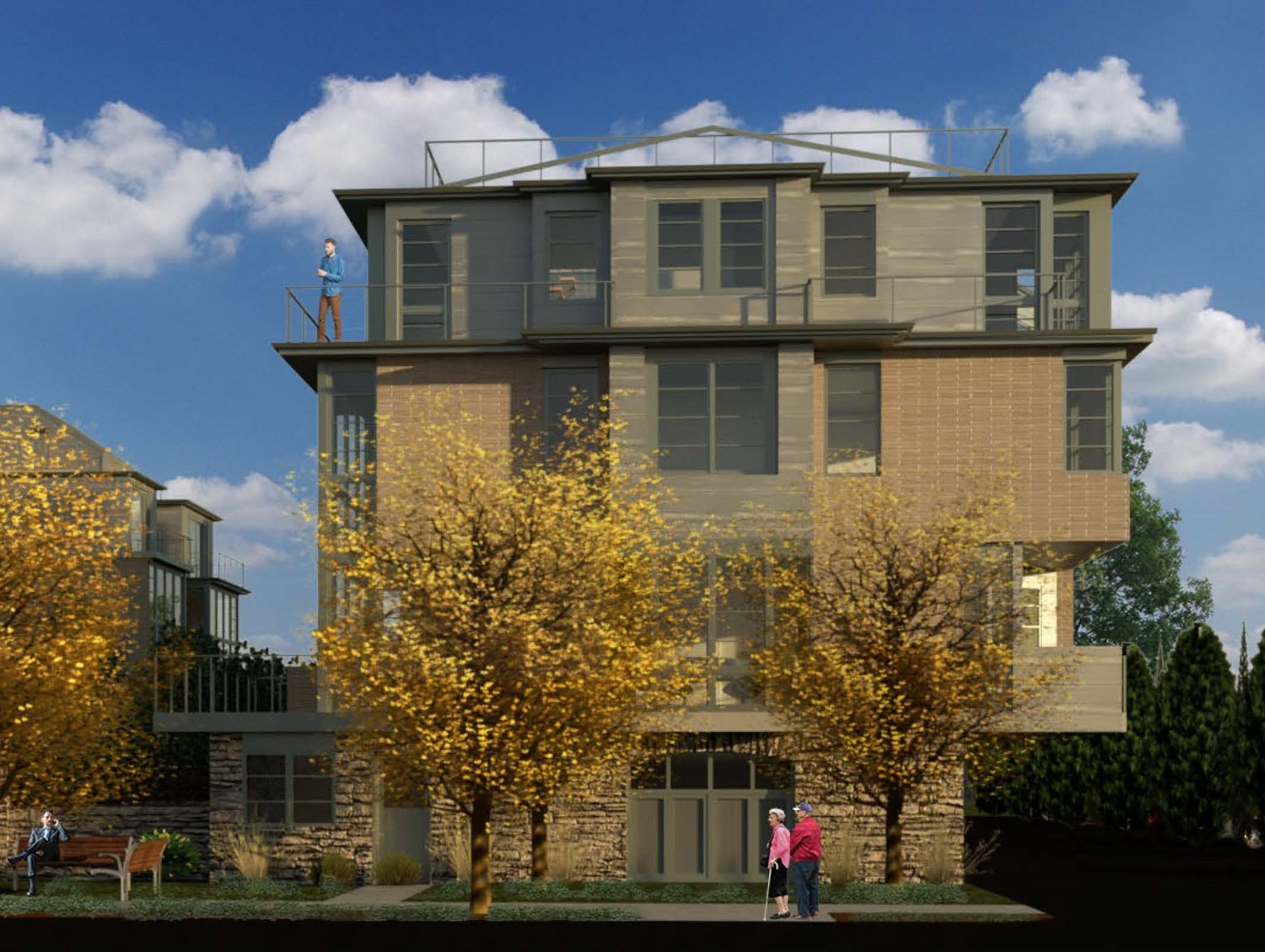 The latest changes to the April 12 design involved lowering the profile of the first unit on the Highland Avenue end: Setting the third (top) floor back further on the east, north, and west sides and removing the roof deck, pilot house, and associated railings above the cornice of the roof at 38 feet. This image shows the configuration before those elements were changed.
Previous Next
Posted Wednesday, April 28, 2021 9:59 am
by Walt Maguire

A Development Review Committee (DRC) subcommittee, with a majority of neighbors and Chestnut Hill Conservancy members, had sent the CHCA board a recommendation to approve on April 12. A dissenting opinion was attached.

After a long discussion, the board voted to endorse the project, 12 -4.  The DRC subcommittee’s recommendation letter will be sent to the Zoning Board of Adjustment (ZBA).

The latest changes to the April 12 design involved lowering the profile of the first unit on the Highland Avenue end: Setting the third (top) floor back further on the east, north and west sides and removing the roof deck, pilot house and associated railings above the cornice of the roof at 38 feet. In addition, there would be more planting on the street side and the west edge of the third floor and along the west edge of units two through six at the Roof Garden Level, to address the concern about views from the roof decks to neighboring properties. The nearest house is 70 feet away.

Henry O’Reilly spoke at the start of the meeting about how the utility of the building had changed as the HVAC business evolved. And then there was the pandemic. After 50 years operating out of the building, O’Reilly said, “having an empty building for six months and still having employees work remotely and productively just made the decision that much clearer.”

The existing building was built in 1903 but does not qualify for historic preservation because of substantial changes made in the late 50s and early 60s. The plan is to tear down the original building and industrial garages, dig up the concrete drive and replace them with eight townhouses, 12 trees, a permeable-surface driveway, a “pocket” park and a residential walkway with small lawns.

The main issue for the neighbors, they said, is density. The proposal, they say, is too tall, too many houses.

The project has been marked by a lag between design and community review. A March 14 survey of 190 neighbors indicated that 63% were opposed due to density, lack of historic significance and “jarring aesthetics.”

The survey also showed 22% opposed the plan because of traffic flow. (The survey itself does not define these categories, but allows for one of four responses: In favor, Against, Not concerned, or Other.)

Some of these concerns had been addressed in new designs presented April 12, and more after the meeting with Councilmember Bass, but only the meeting attendees had seen them yet. A traffic study by F. Tavani and Associates, dated April 20 and presented for the first time April 22, found that “the project will result in about 32% less traffic in the neighborhood as compared to the existing condition.”

While some did seem to be persuaded by the changes, they represented only a handful of neighbors.

“There remain strong community concerns that the building could have found functional utility under different development scenarios,” they wrote.

They cited the online survey and the concern with density.

“The immediate neighborhood is diverse in architecture and its citizens are diverse economically and socially,” they wrote. “Overall, houses are modest - singles, twins and row houses. There are incidental large houses. Front side and back gardens are small but treasured. It has a village ambiance.”

They articulated concerns about a “monolithic structure of institutional appearance” that “could be appropriate adjacent to a suburban office park.”

Because the revisions presented April 22 by the architect McEwen and the owner, Henry O’Reilly, were made within 24 hours of the meeting, they were not as formalized as older materials – instead of a computer-generated artist rendering, there was a pencil sketch – and because more than 200 neighbors had registered their opposition to the project based on the earlier concept, board member Richard Snowden moved that the vote be “paused” until the neighbors had time to review the changes. After a civil but tense discussion, the motion lost by one vote, and the board proceeded to a motion to pass on the subcommittee’s report to the ZBA.

Robbie Kaine, a Highland Avenue resident, said he was concerned with preserving the historic nature of Chestnut Hill and argued an approval of the project would remove a plot zoned for commercial use, possibly eroding the local business environment.  “[T]here is only a small amount of CA-1 zoning in the area,” he said. “Granting a variance to use this scarce resource for a different use is likely to result in future variance requests to change other parcels to accommodate business that would have located on this parcel, except the parcel was precluded from such proper use by this requested variance. Granting this request lacking a hardship is likely to force future variances which will be a hardship on the community.”

The density issue came up repeatedly, and how it would affect the neighbors. Concerns were raised about the height, and how it might affect the light reaching the neighboring houses, or even their privacy. Leaders of 30 W. Highland Neighbors, a neighborhood group, also met with Council Member Cindy, a few days before the board meeting.

In a letter to the CHCA before the meeting, Highland Avenue Jim Miller argued the added density of the new townhomes would negatively impact the neighborhood.

“During spring and summer evenings when we all want to enjoy the peace of our lawns and gardens, condo residents will dine on their decks, entertain guests on their decks, even play music on their decks,” he wrote. “People will shriek with laughter, have animated conversations, or play music, totally unaware of how they are diminishing the quality of life of their neighbors.”

No answers yet for Mermaid Lane neighbors