The city Streets Department has begun testing two choices for the new LED streetlights that will be installed across the city and is now offering residents a chance to weigh in on their color. 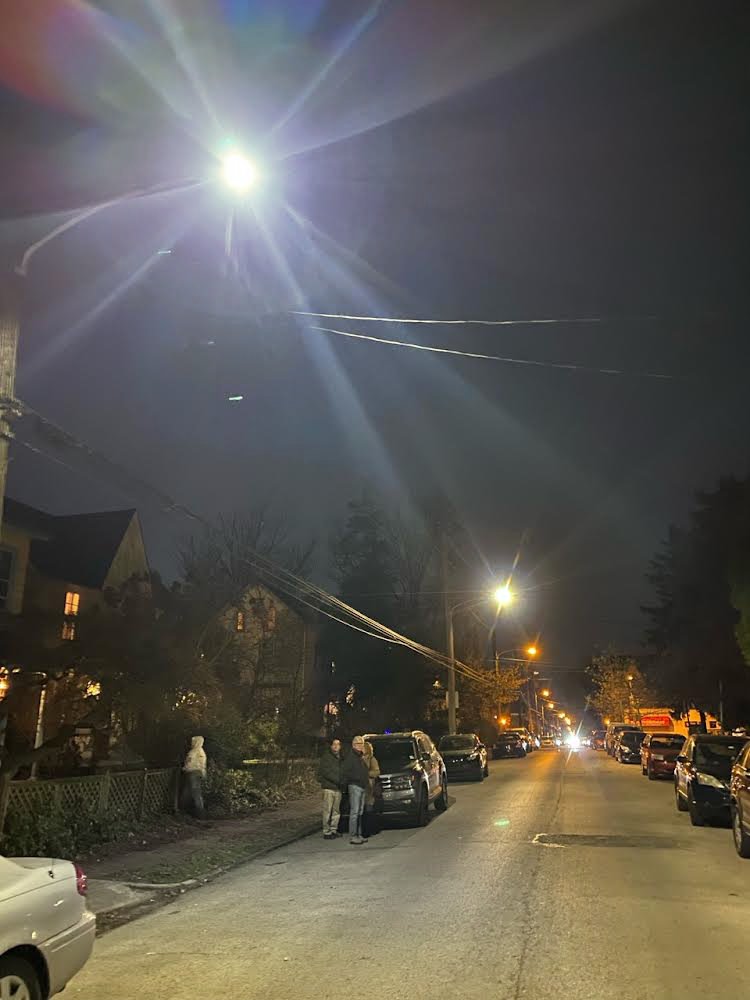 Trial LED streetlights on the 100 block of W. Queen Lane in Germantown on Monday night. The brightest, on the left, is 4000K, while the one next to it is 3000K. The yellowish lights in the background are the existing high pressure sodium light fixtures, which measure about 2700K.
Photo by Tim Breslin
Posted Wednesday, November 23, 2022 12:00 am
by Carla Robinson

The city Streets Department has begun testing two choices for the new LED streetlights that will be installed across the city and is now offering residents a chance to weigh in on their color preferences.

In order to gather feedback, the Streets Department is hosting live demonstration events in neighborhoods across the city throughout the month of November so that residents can see the difference. To register, go to phillystreetlightimprovement.com.

Residents who can’t attend but still want to register their preference can visit one of ten different locations throughout the city on their own, make their choice and fill out the survey online at the same website. The two test locations in the Northwest are the 100 Block of W. Queen Lane in Germantown and the 6100 Block of Lawnton Street in Roxborough.

The choice is between fixtures that are 4000 Kelvin, a light that is in a cooler color range and appears as a brighter kind of white light to the human eye, and a 3000 Kelvin fixture, which is a slightly warmer color. The existing high pressure sodium bulbs that they will replace, which emit a warm and yellowish glow, currently measure about 2700 Kelvin. All of the fixtures are 9,000 lumens, but are reduced to just 30 percent of their strength with dimming technology that will eventually be available citywide.

The streetlight replacement project is Philadelphia’s largest energy conservation initiative and has the potential to cut more carbon emissions than any other, making it a key part of the City’s plan to become carbon neutral by 2050. It will convert more than 120,000 streetlights to LED fixtures in a process that is expected to take about three years.

“As we move towards a resilient and climate-ready Philadelphia, the Philly Streetlight Improvement Project exemplifies the win-win infrastructure investments the city needs,” Mayor Jim Kenney said in a statement. “LED streetlights will help us advance toward our city’s goals for Vision Zero, by providing better visibility to reduce traffic crashes, as well as ensure our continued progress toward meeting our 2030 energy and climate goals.”

Saleem Chapman, chief resilience officer and director of the Office of Sustainability for the city, called the transition a “once-in-a-generation energy conservation project.”

“We are excited to hear from stakeholders on how to maximize the community benefits of this project while also advancing Philadelphia toward our goal of becoming a carbon-neutral city by 2050,” he said.

The 4000K fixtures are identical to new streetlights that were installed in Chestnut Hill over the summer, upsetting residents who say they are too harsh and too bright.

However, those new lights were installed as part of the city’s regular maintenance program, not this citywide replacement project – which means they don’t currently have the dimming technology installed. As a result, they’re shining at full strength, which is three times as strong as the fixtures in the demonstration installations – and produce a light that residents say is much too harsh.

A group of Chestnut Hill residents who attended a live demonstration on the 100 block of W. Queen Lane in Germantown on Monday said they appreciated the dimmer light, and also reported a strong preference for the warmer color.

“The lower-lumen light was more than bright enough to illuminate both sides of Queen Lane,” said Stan Cutler, who lives on Highland Avenue and went to the demonstration. “To my eyes, it still seemed brighter than necessary. One of my objections is the extreme contrast between the lit and shadowed spaces. The lesser light in the demo was an improvement but, in my opinion, unnecessarily bright.”

“The color was more toward the amber spectrum, but not amber enough in my opinion,” said his wife, Valerie Cutler.

Tim Breslin, another member of the Highland Avenue group of residents who have been upset by what they describe as overly bright and harsh lighting, agreed.

“Of these two options, the clear winner was the one with the warmer color,” he said.

Breslin, who has tested the color range with his own light meter, said he measures the new fixtures at a much bluer color.

“When I tested with my light meter they measured more than 6000k and more than 4000k respectively,” he said. “But since they were dimmed down they weren’t as harsh as the lights on our block.”

Still, he said, he thinks they could be better.

“If these lights were actually 3000K and if they were encased in glass covers like the lights that were recently installed along Germantown Avenue, they could be vastly improved,” he said. “That being said, had these been installed initially, I likely would not have devoted so much of my time to fighting them.”

A three-year roll out

Deputy Streets Commissioner Richard Montanez said he is trying to get some dimmers for Chestnut Hill through a pilot project, but could not say when that is likely to happen.

Meanwhile, Ameresco – the energy services company selected to manage Philadelphia’s transition project – is required to gather community feedback as part of their contract. The company has also managed LED transitions for Chicago and Phoenix.

This lighting design portion of the citywide replacement project, which includes community feedback, is expected to be completed by early 2023. Once the design is done, implementation is expected to begin by spring 2023. The entire project is scheduled to take about three years.

And it won’t be a moment too soon. Streets Commissioner Carlton Williams said the city’s existing lights are now about 50 years old and are long overdue for an upgrade.