The Children's Playground at the Jenks School is turning 25 this year, which means there are local kids now playing where their parents used to. 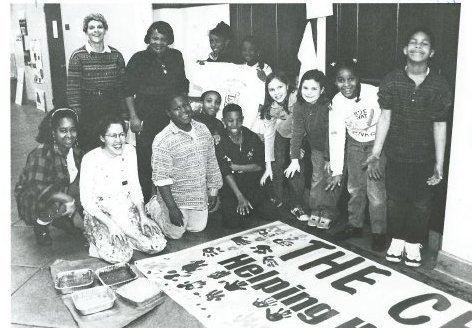 The Children's Playground at the Jenks School is turning 25 this year, which means there are local kids now playing where their parents used to.

As the playground seeks new funding to refresh the site, we'd like to share the story of the remarkable community effort that led to its creation.

As early as 1995, planning had begun to create a new playground at the John Story Jenks School, which was to be constructed entirely by volunteers. It would cost $180,000 to build the Chestnut Hill Children’s Playground, affectionately known as Jenks Playground, and fundraising quickly gained momentum.

Shortly after opening the new playground, the January 23, 1997 issue of the Local wrote that a fundraising concert netted $1,200.

“Last Sunday afternoon, the Chestnut Hill Children’s Park… got a nice lift from the John Flynn Children’s Concert,” the article stated. “There were 256 people there willing to pay $6 each to support the project while enjoying John’s music. And while it seemed chaotic, the children enjoyed the performance.”

“Buy a Board” sales were held at the concert, along with a bake sale. And by February, a number of stores had pledged food to the Chestnut Hill Children’s Park and Garden Committee for distribution to the volunteers during the construction. Food donors included Dunkin Donuts, Wawa, and Wendy’s, with 7-Eleven, Bredenbeck’s, Caruso’s Market and Boston Market later joining in.

Paul Welsh, a student at Our Mother of Consolation School designed a t-shirt logo, with proceeds going to the Children’s Park.

Then the playground received a major boost when committee co-chairs Barbara Mattleman and Joyce Lenhardt received a $10,000 grant from the Independence Foundation. By the end of February, sales of planks and boards raised an additional $3,022, with the hopes that a total of 640 boards would eventually be sold; these were to fully enclose the new playground.

Other fundraising events included a performance by the Chestnut Hill School of Ballet, a recycling drive at Wyndmoor station, and a dance in the rotunda of Chestnut Hill College featuring the sounds of local band, ONE LOVE. Borders Books also joined in, pledging 15% of its sales for the last two weeks of March.

By March, attention turned to construction, with the Tool Committee collecting donations of tools needed, an effort led by John McCoubrey and Charles Overholser. Tools were not limited to hand tools, but included a backhoe, forklift, and crane.

Jenks students designed a banner to be hung on the school’s fence along Germantown Avenue, exclaiming “The Children’s Park in Chestnut Hill: Helping Hands Needed! Together We Can Build It! By the end of the month, more than $28,000 had been raised.

Fundraising continued in April, with O’Donnell’s installing four large dinosaur banks adjacent to their cash registers. These dinosaurs could “gobble up” that unwanted change received by customers, which was then donated to the playground.

Door-to-door solicitations were begun, with residents asked to purchase fence boards, t-shirts and to donate money. By early May, $33,125 had been raised for construction of the Children’s Park, with an additional boost of $5,000 coming from the CHCA.

By the end of May, $120,000 had been raised, with the Local covering the donations received for the playground each week. It was at this time that a call for volunteers to help build the playground was placed in the Local, asking for volunteers to work in three shifts each day, from June 4 through June 8. This was preceded by several days of site preparation work and the arrival of materials.

After hundreds of volunteers worked feverishly to finish the construction of the playground, a ribbon-cutting ceremony was held Sunday evening, June 8th at 6:30 p.m.

And fundraising continued long after the ceremonies had ended, with $165,965 raised by the end of June.

Now, 25 years later, the fundraising efforts associated with the construction of the Chestnut Hill Children’s Park remain a remarkable achievement, with individuals, businesses, and organizations all joining to create a community landmark. With the continued care of the playground by the Friends of the Children’s Park in Chestnut Hill, we look forward to enjoying the playground for the next 25 years to come.