David McCullough’s ‘The Pioneers: The Heroic Story of the Settlers Who Brought the American Ideals West.’

by Hugh Gilmore The peace treaty marking the end of the Revolutionary War was signed in Paris in 1783. Before the treaty pens were dipped, the newly formed United States government, in David …

David McCullough’s ‘The Pioneers: The Heroic Story of the Settlers Who Brought the American Ideals West.’ 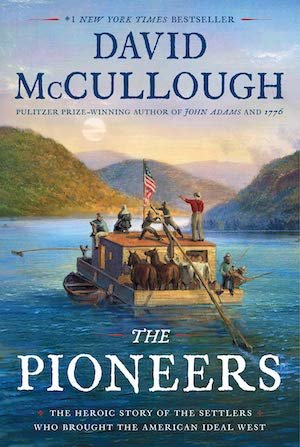 The peace treaty marking the end of the Revolutionary War was signed in Paris in 1783. Before the treaty pens were dipped, the newly formed United States government, in David McCullough’s words, “did not own a single acre of land.” By the time the ink dried, Great Britain had ceded all the lands west of the Allegheny Mountains and northwest of the Ohio River on the eastern side of the Mississippi. Suddenly the United States had over 265,878 square miles of “undeveloped territory” known as the Ohio Country.

Land development companies began forming almost at once. Once such, a group of 10 Continental army veterans met in Boston in 1786 to form the The Ohio Company of Associates. Their chosen representative was Manasseh Cutler, a Yale man who held doctoral degrees in law, medicine and divinity. More importantly, he possessed great vision, tenacity, charm and integrity. It was he who convinced Congress, after a trying ordeal, to approve the Ohio Company’s patent. With that, the company received the rights to 1,500,000 acres of “howling wilderness” and the real struggle began.

This is the story at the heart of David McCullough’s book “The Pioneers: The Heroic Story of the Settlers Who Brought the American Ideals West,” which was published in May. McCullough’s intention was to write about “a cast of real-life characters of historic accomplishment who were entirely unknown to most Americans – to bring them to life … and tell their amazing and, I felt, important story.”

McCullough happened on the trove of rare material he used to write this book quite by chance. After he was invited to give a commencement address at Ohio University in 2004, he learned of the Rev. Manesseh Cutler, the founding of Marietta, Ohio, and the origins of Ohio University, the first school of higher learning in the state. He soon also discovered that the Ohio Company’s constitution guaranteed freedom of religion, free public education and freedom from slavery. This latter freedom was of particular note because all 13 of the United States at that time allowed slavery and none offered free public education.

Once he expressed his interest in writing about this endeavor, the museums, libraries and archives holding the story opened to McCullough. The major narratives of the resulting book came from the diaries, journals and writings of five of the important persons who shaped the founding of the new settlements along the Ohio River between the 1780s and about 1830. The story of their hardships and how they survived them, as told by the pioneers themselves, is fascinating and filled with incredible, admirable and detailed episodes.

As expected, “The Pioneers” began its literary life on all the prominent best seller lists. Not unexpectedly, it has also provoked controversy. Reviewers in both the The New York Times and The Washington Post, and a new generation of scholars and activists, are criticizing the book because of the story he did not tell: that of the Native Americans crushed beneath the wheels of all those Conestoga wagons that settled the Ohio Territory.

Much of the controversy focuses on the word “settlers.” The Indian tribes of Ohio did not think of where they lived as being unsettled. In our present age of heightened consciousness about such matters, it is inevitable that any book that portrays the pioneer settlers of America is expected to present both points of view.

While we all chew on that idea, there still is a very worthwhile reading experience to be had from reading McCullough’s distillation of the pioneers’ journals and diaries of the lives they led.

Hugh Gilmore lives and writes in Chestnut Hill. He has written book reviews for more than 20 American newspapers, specializing in natural science and Americana.

Donate now to CH Local
The Latest
Important questions for voters on May 18
Under a much more quiet set of circumstances than last November, local voters again are heading to the polls to vote in a primary election. So-called “off-year” elections, in which …

Anthony Kroch, linguistics professor
Anthony (Tony) Kroch, Professor Emeritus of Linguistics at the University of Pennsylvania, died of cancer at the age of 75 on April 27 in his home in Mt. AIry. He was attended by his wife, family and …
Founders Day marks another opportunity to help local aid agency Face to Face
On May 13, 1984, the dining room doors opened for the first time at Face to Face in Germantown. The idea was simple: much like a soup kitchen, it would offer hot meals for locals, no questions asked.

25-year publishing dream comes true for Hill sisters
Twenty-five years ago sisters Abby Pete and Leslie Pontz hired an agent to find a publisher for a proposal they had for a children's book of theirs that would be called “Harvey the Hippo.”
Development plans next to Pleasant Playground hinge on pollution at the site
The contested development plans for a 34-unit apartment building next to Pleasant Playground in East Mt. Airy hinge on known pollution at the site and what will eventually be done with it.