Thornburgh recounted an experience he had five years ago when voting in a primary election at the Chestnut Hill Library, where he saw a mother with two young children ask two poll workers how she, as a registered independent, can vote in the primary election. 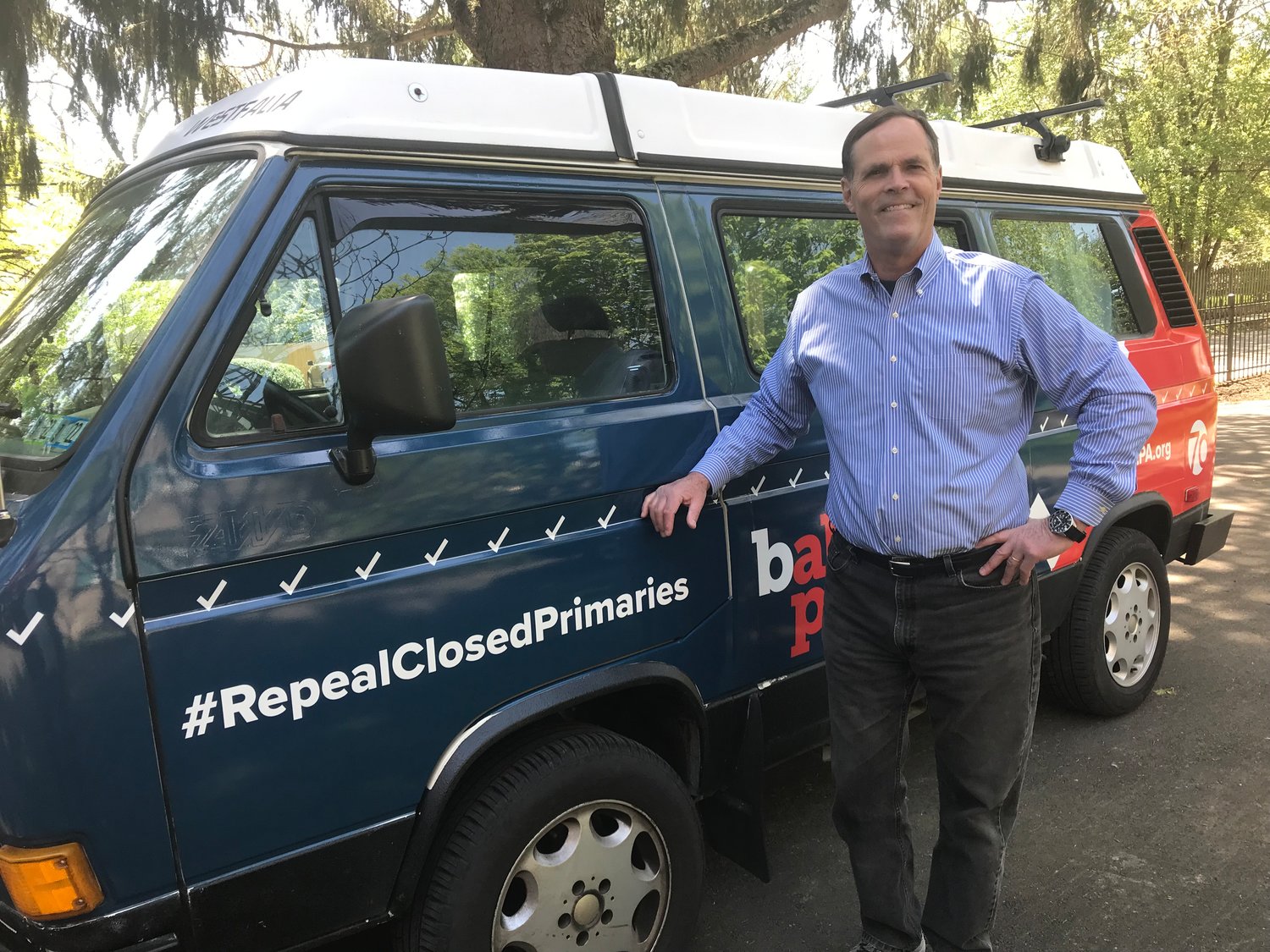 David Thornburgh, chair of Ballot PA and senior advisor to the Committee of Seventy, stands next to his 1991 Volkswagen Vanagon Westfalia, which he had wrapped with a Ballot PA theme. The van has 213,000 miles on it.
Posted Wednesday, May 4, 2022 11:18 am
by Tom Beck

Longtime Chestnut Hill resident and noted politico David Thornburgh has had a busy life since heading up the Committee of Seventy, a Philadelphia-based nonpartisan good government group, as its President and CEO since 2014.

In January, Thornburgh left that position to chair one of the group’s new initiatives, called Ballot PA, which seeks to end Pennsylvania’s status as one of only nine states in the country that have closed primaries.

“The reason we feel strongly about this idea is that it feels fundamentally unfair to exclude some voters from voting in primary elections, simply because they chose not to be registered in the party,” said Thornburgh, who has stayed on at the Committee of Seventy as a senior advisor. “In states with closed primary elections, only registered Democrats can vote in the Democratic primary. Same goes for the Republican primary and for third party primaries.

Thornburgh recounted an experience he had five years ago when voting in a primary election at the Chestnut Hill Library, where he saw a mother with two young children ask two poll workers how she, as a registered independent, can vote in the primary election.

“They looked at each other with faces like 'I'm not going to tell her. Are you going to tell her?' Thornburgh said. “They finally did, and then she turned around and walked out and I just imagined the conversation she had with her kids afterwards, having to explain to them why mommy couldn't vote.”

Thornburgh argues that because so many state and local elections are decided in the primary and not in the general election, it means candidates don’t have to pay any attention to independent voters.

Another reason why Pennsylvania still has closed primaries is because “elected officials are naturally cautious about changing the rules by which they themselves got elected,” he added. “That may explain why, at least in the past, they're not always eager to kind of rewrite the rules - even in the interest of fairness.”

Changing the state’s primary system would require a bill to pass in the Senate and the House and be signed into law by the governor - just like any other piece of legislation.

There is good reason to believe that could happen soon, Thornbugh said.

A bill already passed the Senate with strong bipartisan support in 2019, with a vote of 42-8, Thornburgh said. And while that bill failed in the house, he said, committee changes have since increased the possibility of approval.

“The House was undergoing some leadership changes and there was a particular committee chair who was not interested in this at all,” Thornburgh said. “But the cast of characters has changed in the House and we're hopeful they'll be receptive to this idea.”

The chief concern for most advocates of closed primaries is that open primaries would allow for, say, a left-leaning independent to vote for who they feel is the worst Republican candidate, so that their preferred Democrat would have an easier path to winning the general election.

But Thornburgh told the Local that there’s no evidence of this actually occurring in open primary states. “If you look around the country,” he said. “That just doesn't happen.”

After all, Thornburgh argued, an opposing party would have to invest “an enormous” amount of time and effort in pulling something like that off, he said.

“It feels like a backwards way or a very inefficient way of trying to win an election,” he said.

The closed primary system can also exclude certain racial groups, Thornburgh said.  For instance, Hispanic voters in Pennsylvania are about 50% more likely to register as independents, he said, while Asian voters are about twice as likely to do so.

“Those are the growing segments of the population in this state,” he continued. “So it feels unfortunate at least that those folks are breathing life into communities, and yet because of the way they're choosing to register, we're prohibiting them from participating in the democratic process.”

And if chairing Ballot PA wasn't enough to make you believe Thornburgh is passionate about opening Pennsylvania’s primaries, you should check out his car, a 1991 Volkswagen Vanagon Westfalia which he had wrapped with a Ballot PA theme. He takes it out on the road frequently whether he’s going shopping or camping. It’s always starting conversations.

“They say, you know, ‘What's that all about?’ And we get into a conversation,” Thornburgh said. “It's a rolling billboard that serves this issue well.”