The contested development plans for a 34-unit apartment building next to Pleasant Playground in East Mt. Airy hinge on known pollution at the site and what will eventually be done with it. 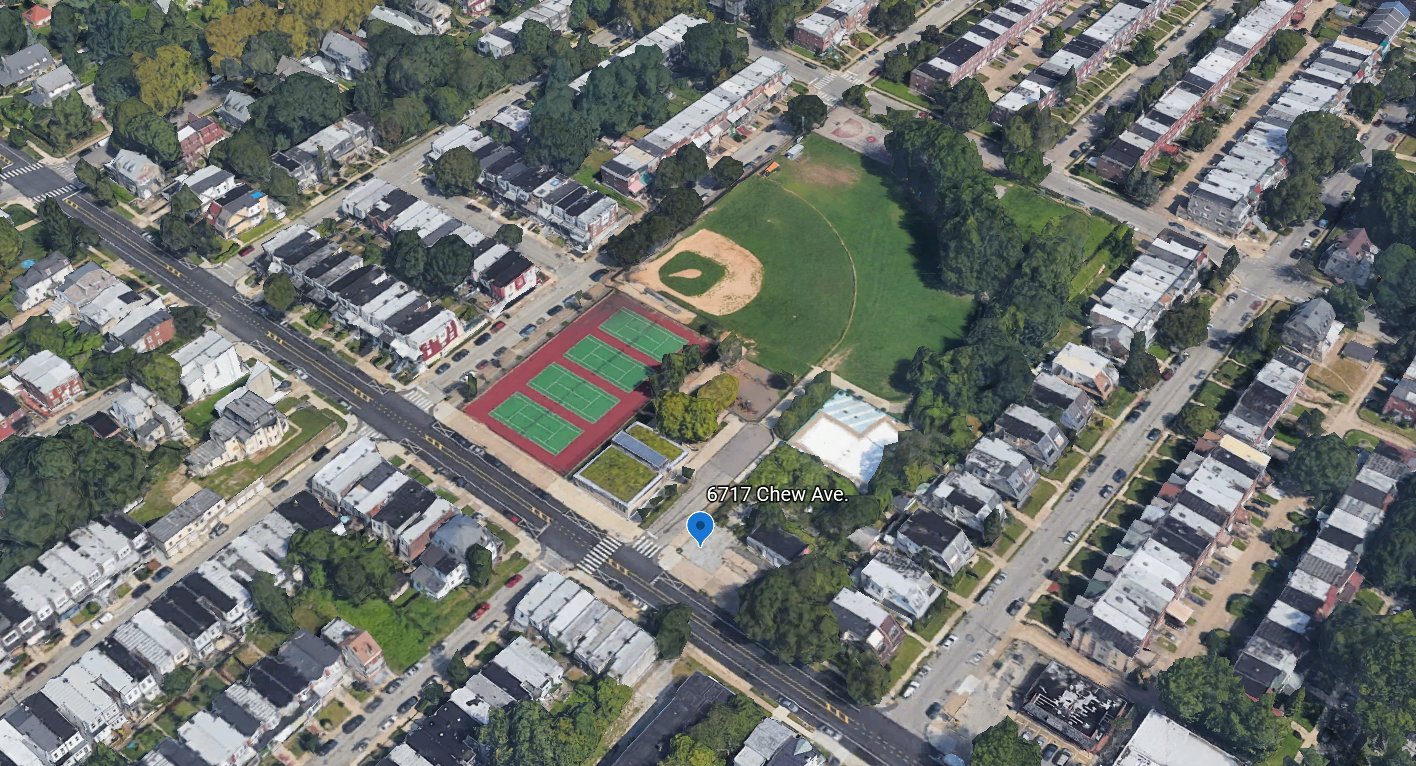 A Google Earth image shows 6717 Chew Ave., the location for a proposed development. It’s proximity to the surrounding playground complex has neighbors and local leaders opposed.
Posted Thursday, May 13, 2021 10:00 am
by Patrick Cobbs

The contested development plans for a 34-unit apartment building next to Pleasant Playground in East Mt. Airy hinge on known pollution at the site and what will eventually be done with it.

The high projected costs of state-supervised cleanup at 6717 Chew Avenue is a key point in the developer’s argument that the project should be allowed there despite conflicting zoning and opposition from many neighbors, but the Pennsylvania Department of Environmental Protection has not received any indication yet that such a cleanup is planned for the site.

“To the best of my knowledge we don’t have anything,” Randal Maud, a geologist at the Southeastern Office of the DEP said.

He searched for the filings two days after Jonathan Thomas of Audax Properties testified at a Zoning Board of Adjustments hearing May 5. Thomas and his company requested zoning variances necessary for the project to go forward, telling the ZBA that these cleanups would cost $250,000, a number so high, he said, that nothing besides his large residential building would be profitable at the corner of the 4.5 acre park.

Many neighbors have objected to this project because of its size, the large number of units, and because many want something on the lot that would complement the park, playground, recreation center, and public pool more directly.

Four nearby neighbors opposed Audax at the May 5 hearing, but there was no resolution to the case. The ZBA ran out of time mid-argument and scheduled the hearing to resume June 30.

But the neighbors’ lawyer, Stephanie Heimann, did have enough time to accuse Audax of misrepresenting details about the cleanup to make the variance seem more needed, while keeping options open to skip the cleanup, and presumably not to spend nearly as much money in the end.

“Cleanup costs are overstated… And they are not mandated by an authority to be done,” she said. Rather Audax is creating a convenient “hardship by choice… that the [company] can opt in and out of by choice.”

Heimann never got to present evidence on this point, though some seems to exist.

The lot at the corner of Chew and Slocum has an estimated seven buried fuel and oil tanks. An earlier environmental report puts top-end estimates to clean the site at $172,000. According to industry insider Mark Ioos, who is in charge of the Site Investigation and Closure department at Skelly and Loy, Inc. in Harrisburg, an environmental services firm that is unconnected with this argument, the costs could be even lower. Ioos gave rough estimates that would put the removal of seven tanks from a site like this at around $90,000. Both numbers are far less than what Thomas told the ZBA.

Ioos also said contamination of this type tends to get better over time, not worse. The tanks on the site are expected to be decades old.

Also, the state’s Land Recycling Program, or “Act 2” legislation, is indeed voluntary, just as Heimann told the ZBA. An owner can decide not to clean contaminated lots that qualify for this program if they are not worried about the contaminants.

If an owner did elect to clean up a contaminated site in the Act 2 program, they would begin by sending a Notice of Intent to Remediate to the DEP. This would signify their plans and initiate state oversight. But, as Randal Maud of the DEP said, this has not occurred yet for 6717 Chew.

“I have no idea whether it’s contaminated,” Maud said. And he added, because of the voluntary nature of Act 2, “the state may never see information on this.”

Maud said there was no specific timeline for beginning Act 2, but it was typically started at the beginning of a project and before financing it.

Asked why the DEP had not received a Notice of Intent to Remediate, the developer’s lawyer, Hercules Grigos, said they were waiting until the project was approved and design details were finalized before implementing a cleanup plan.

The ZBA hearing, and presumably the argument over the real cost of the site’s contamination, and therefore the justification for the zoning variances needed to keep the project alive, won’t play out fully until late next month when the hearing resumes.

Representative from Audax Properties did not respond to requests for comment.