After four years, Frank DiCicco stepped down as Chair of the city’s five-member Zoning Board of Adjustment. His replacement is Temple University’s Vice President for Public, Government and Community Affairs, William Bergman.

Former City Councilman Frank DiCicco is stepping down from his role as chairman of the city’s Zoning Board of Adjustment. 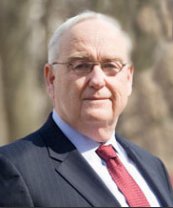 Philadelphia Mayor Jim Kenney announced last month that Frank DiCicco would be stepping down as Chair of the city’s five-member Zoning Board of Adjustment, and be replaced by Temple University’s Vice President for Public, Government and Community Affairs William Bergman. Bergman’s first meeting was scheduled for Tuesday, Nov. 30.

“Frank DiCicco served as Chair of the Zoning Board of Adjustment for more than four years and had decided to move on to other opportunities,” said city spokesperson Kevin Lessard in an email to the Local.

In addition to being the now former zoning chair, DiCicco also runs a lobbying firm. One of his clients, The Goldenberg Group, owns property at 100-102 E. Mermaid Lane in Chestnut Hill, former site of Blossom Philadelphia and the old Chestnut Hill Friends Meeting House.

The company plans to construct a six story, 258-unit apartment complex on that site. Because DiCicco’s company represents the developer, he would have had to recuse himself in any hearings regarding a potential zoning variance. However, Goldenberg has said it is seeking to “spot zone” the site, which would mean lobbying the district councilperson to allow special zoning for that parcel, rather than go before the zoning board.

Kenney, in a press release, thanked DiCicco for “his leadership and contributions” and touted Bergman’s “extensive experience.”

“I am confident with Bill Bergman’s extensive experience within City government, along with his deep knowledge of and commitment to the ZBA’s mission,” he said, adding that “the ZBA will continue to build on the equitable and sustainable growth and development of the city.”

Bergman worked closely with the City’s Planning Commission, the Zoning Board of Adjustment, and the City’s Department of Licenses and Inspections in those roles.

While at Temple, Bergman led the establishment of two major community advisory groups, on each side of Broad Street. The two groups inform Temple about the important issues to the community; an engagement has led to the establishment of a Special Service District, a press release for his appointment notes, that provides street cleaning and additional safety measures from Broad Street to 18th Street.

The Special Service District contracted One Day at a Time, a youth-serving community organization, to provide street cleaning. ODAT hired local youth from the area who are also receiving educational and personal growth services.

Prior to his positions at Temple, Bergman served 27 years with the Philadelphia Police Department, where he acted in several executive leadership positions.

Currently, he serves as a member of the Salvation Army Board and the Philadelphia Opportunities Industrialization Center (OIC) Board. Previously, Mr. Bergman was an active board member with Northwest Victims Services.

A native Philadelphian, Bergman holds an B.S. in Accounting from Jefferson University (formerly Philadelphia University and Philadelphia College of Textiles) and a Master’s Degree in Criminal Justice from St. Joseph’s University. He also attended executive training at the Kennedy School of Government at Harvard University.