Didinger details all there is to know about Philly sports

Ray Didinger starts out his new book with a Q & A he gave “in the activities room at the Chestnut Hill Presbyterian Church.” Why would a local church invite a sportswriter to address their congregation?

Didinger details all there is to know about Philly sports 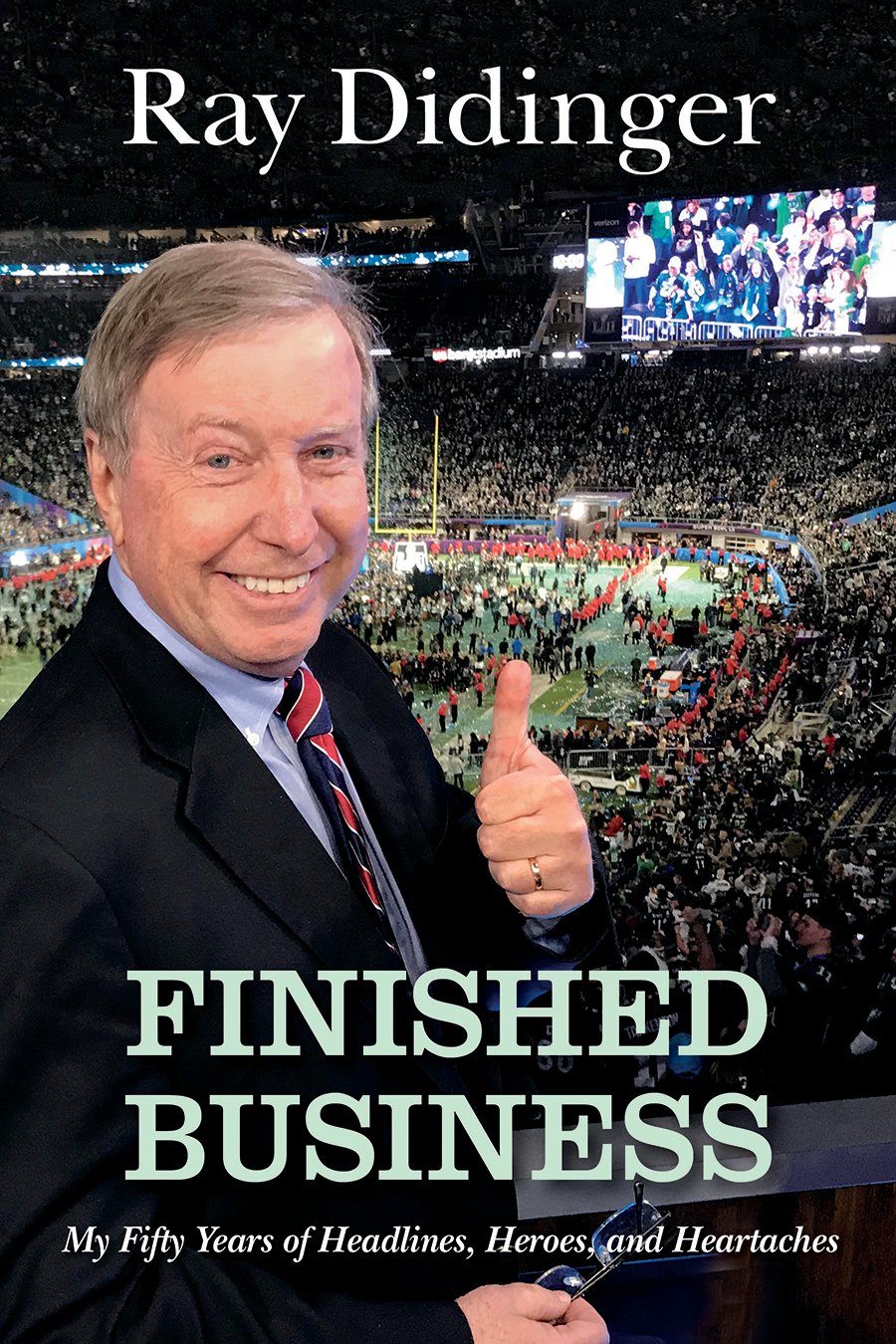 Ray Didinger's new book, a must for Philly sports fanatics, is “Finished Business: My Fifty Years of Headlines, Heroes and Heartaches.”
Posted Friday, June 18, 2021 10:20 am
by Len Lear

Ray Didinger starts out his new book, “Finished Business: My Fifty Years of Headlines, Heroes and Heartaches” (Temple University Press, publication date: May 26, 2021), with a Q & A he gave “in the activities room at the Chestnut Hill Presbyterian Church.” Why would a local church invite a sportswriter to address their congregation? “Because they might have something like a Men's Night, so it's fun to have a sports figure, but a professional athlete or coach will charge them $10,000, and I cost them nothing, so why not call me?”

If you have to ask who Ray Didinger is, then you are definitely not a passionate Philly sports fan. Ray, 74, who does not have a cell phone and who lived in East Falls for 34 years until November of 2019 (he now lives with his wife, Maria, in Rittenhouse Square), has been covering the Eagles as a newspaper columnist or TV analyst for 51 years. Over those five decades he covered sports for the Philadelphia Bulletin and Philadelphia Daily News and later produced Emmy Award–winning documentaries for NFL Films before transitioning to sports talk radio and TV analysis.

This walking Philly sports encyclopedia, who is currently a talk show host on 94WIP Sports Radio and football analyst for NBC Sports Philadelphia, was the first print journalist inducted into the Philadelphia Sports Hall of Fame. As a newspaper columnist, he was named Pennsylvania Sportswriter of the Year five times, and in 1995 his name was added to the writers’ honor roll at the Pro Football Hall of Fame.

As a long-suffering fan of Philly sports teams, I can say without reservation that every Philly fan would love this book. Every single page is filled with treasures and anecdotes — the good, the bad and the ugly — that flood the mind with memories of one's youth, teenage years and adulthood. In fact, when I got the book, I was already halfway through “A Farewell to Arms,” a 20th century classic by Ernest Hemingway, who won a Nobel Prize for Literature, and this will expose me as a real yahoo, but I definitely enjoyed reading Didinger's book more than Hemingway's.

Didinger writes about his interviews with so many legendary athletes like Hank Aaron, Wayne Gretzky, Muhammad Ali, Julius Erving, Jack Nicklaus, Mike Schmidt, et al, and he has written film scripts for Hollywood stars such as Bruce Willis and Alec Baldwin. He went to the White House with the U.S. Olympic team and even explored the corrupt but fascinating world of professional wrestling.

The greatest game he has ever seen? Super Bowl L11 (Eagles beat the Patriots), in which more yardage was gained by the two teams combined than in any other game in NFL history. The best Philly athlete he has ever seen? Mike Schmidt (second is Reggie White). The most unforgettable Philly athlete ever? The late Tim Rossovich, Eagles linebacker who did everything to get attention but jump off the Ben Franklin Bridge.

The wonderful insights and amusing anecdotes never stop coming. For example, “Philadelphia welcomes Jeffrey Lurie (current Eagles' owner) with open arms, but Philadelphia always welcomes its football owners with open arms. That's because the fans are so glad to get rid of the previous owner that the new guy is seen as a savior, regardless of who he is. The fans always throw bouquets in the beginning, but in the end it's, well, snowballs.”

Ray writes affectionately about Julius “Doctor J” Erving, who would stay as long as it took after games in order to satisfy every autograph request, and Charles Barkley, who “was known as 'the Leaning Tower of Pizza,' a reference to his 6'5”, 270-pound frame. He had acquired many nicknames: 'Boy Gorge,' 'Chuck Wagon' and, of course, 'the Round Mound of Rebound'”

During our two-hour phone conversation, Didinger made it a point to express the greatest respect for Ed Rendell, former mayor and governor, who has also been a post-game (Eagles) talker with Didinger on WIP Sports Radio and who also earned a section in the book. “I used to drive him home from the games. He lived in East Falls, one block away from us. I can tell you that he really does care about people, and he honestly believes that people should go into politics to make other people's lives better, not their own.

“The first year I worked with Rendell, I got a letter from a woman who said she was desperate, was losing her home, etc., and had tried to get help from the city, but no one would help her. Since I sat next to Rendell for two hours every Sunday, she thought I could do something. I gave her letter to Rendell, and three days later I got another letter from the woman, who said she heard from the mayor's office right away, and they gave her the help she needed!”

For more information, visit tupress.temple.edu. Len Lear can be reached at lenlear@chestnuthilllocal.com