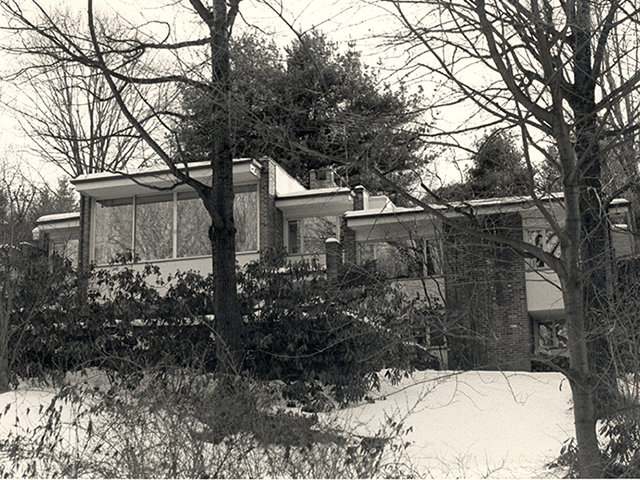 William W. McDowell, Jr. was a prominent architect who spent much of his life living and working in Chestnut Hill. Setting up shop in Chestnut Hill in 1962, McDowell designed a number of local residences and additions over a period of 50 years.

These houses included those in both the Contemporary and Cape Cod styles. Employing a modern, simple, and straightforward style, he always put function first. His homes were easy to furnish and comfortable to live in.

Among the early houses were those he designed for David Eichler of Eichler & Moffly Realtors in Chestnut Hill, which stand today. McDowell designed a number of houses for Charles Woodward including a set of twins at 145-151 West Gravers Lane. Other examples of houses he designed can be seen on Moreland Circle and the 400 and 500 blocks of West Mermaid Lane.

McDowell was born in Chestnut Hill and attended Chestnut Hill Academy until 8th grade, when the high school closed during World War II. He graduated from the St. Andrews School in Middletown, Delaware, and then attended Princeton University where he was a member of the Class of 1951.

After his graduation from Princeton, he went on to attend the architecture school of the University of Pennsylvania, where he graduated with high honors in 1954. At the University of Pennsylvania, McDowell was influenced by the dean, Louis Kahn, and practiced in the modernist style. He went to work for the firm of Howell Lewis Shay where he worked on the design of a number of buildings at Penn State University’s main campus.

On Sunday, Nov. 12, join Bill McDowell, son of William McDowell Jr., for a driving tour of a sample of houses designed by William McDowell. Light refreshments will be served at one of the houses. This tour is one in a series of walking/ biking/ driving tours offered by the Chestnut Hill Conservancy each fall and spring. For information on joining the tour, visit http://chconservancy.org/walking-tours