Down but not out: El Quetzal reopens

Nearly three months after a catastrophic fire ripped through the historic Hiram Lodge in the heart of Chestnut Hill’s business district, destroying El Quetzal, the store is reopening.

Down but not out: El Quetzal reopens 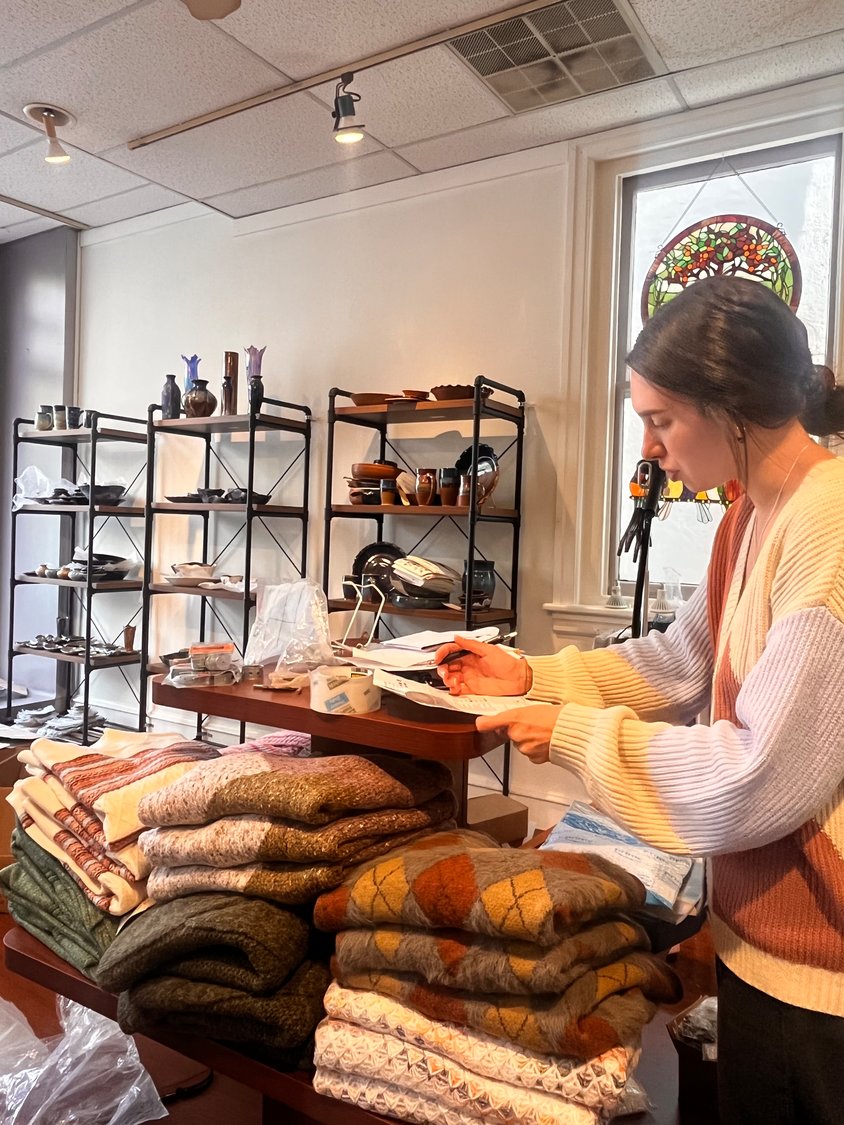 Store manager Lindsey Kiska works to reopen the store in time for the Christmas shopping season. 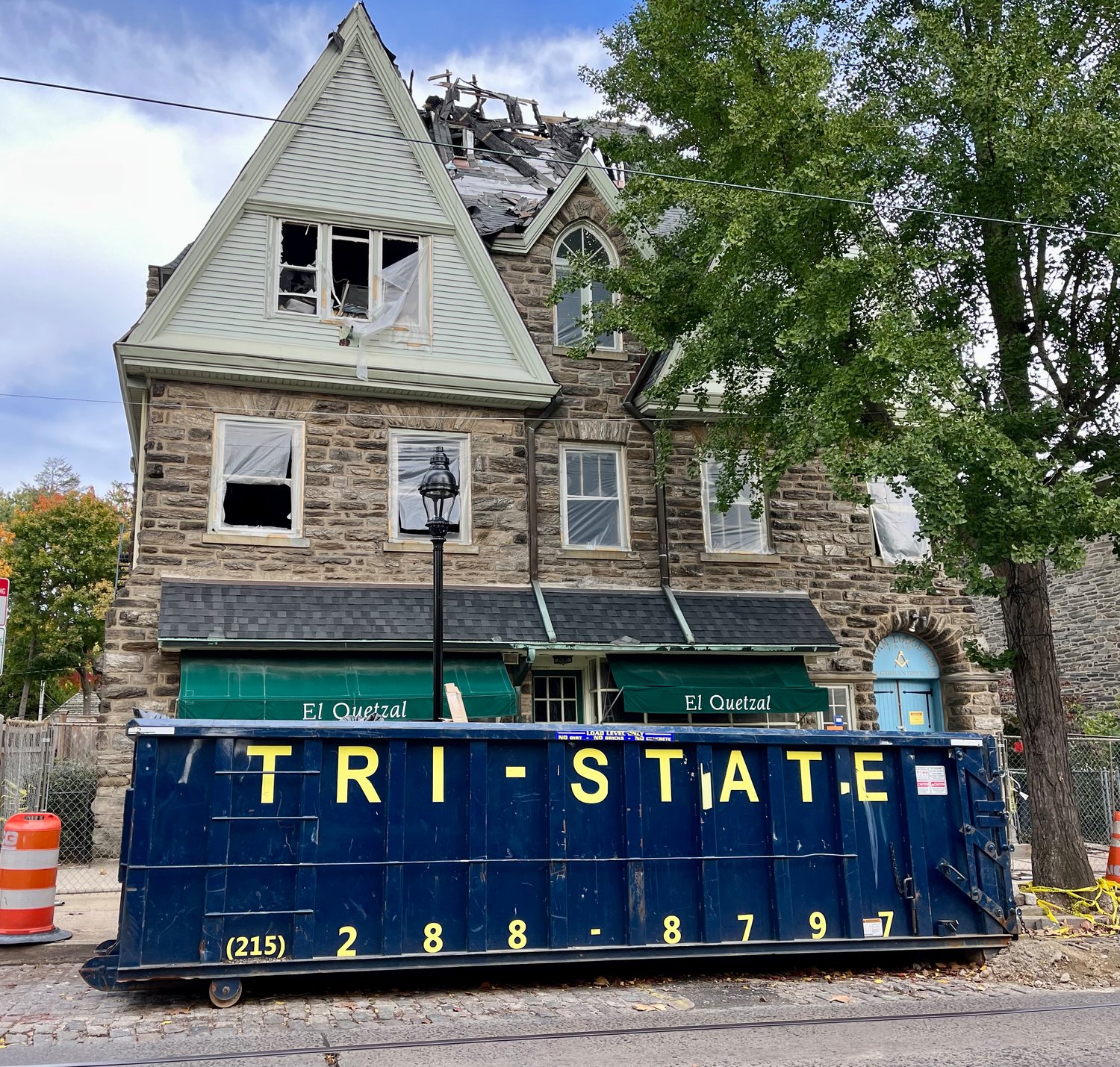 Pictured here is one of the five 30-foot dumpsters that El Quetzal owners needed to clear away inventory damaged by the fire. Philadelphia investigators ruled in late September that the fire that destroyed the historic Hiram Lodge in mid-August was accidental, and caused by faulty wiring. The Lodge had hired a contractor to do renovations on the building, including some electrical work. But according to city records that work had been underway without the required city permits. In a previous article, Lodge member and spokesman Josh McKnight told the Local that “all permitting would have been the responsibility of the contractor,” and that their insurance company had hired a cause-of-origin investigator to spearhead its own investigation into the cause of the fire. As of yesterday, McKnight said the Lodge has “no comment on what our insurance company plans to do.” The Department of Licenses and Inspections is currently investigating the matter.
Previous Next
Posted Thursday, November 3, 2022 12:00 am
by Carla Robinson

Nearly three months after a catastrophic fire ripped through the historic Hiram Lodge in the heart of Chestnut Hill’s business district, destroying the El Quetzal store as well as the building, Yosma Luby and Bill Shields are celebrating the re-opening of their popular boutique in what they hope will be a temporary location across the street.

Luby and Shields have signed a 15-month lease with owner Bowman Properties for 8438 Germantown Ave next to Kilian’s Hardware store, and may be there for an additional year after that – depending on what ultimately becomes of their old location.

Josh McKnight, a member of Hiram Lodge and spokesman for the group, told the Local that the Lodge does intend to rebuild, but as of press time on Tuesday he could not say exactly when that would happen.

“We hopefully expect to have city permits very soon, and we have a contractor who will be starting work and removing damaged material from the inside,” McKnight wrote in an email. “They will be building a temporary roof to keep out the rain and snow and winterize the building.”

Courtney O’Neill, director of the Chestnut Hill Business Association, said her group was “thrilled” to see the store get back up on its feet.

“El Quetzal has been a vital part of the retail community for decades, and owner Yosma Luby has been an important volunteer leader in the Chestnut Hill Business Association,” O’Neill wrote in an email to the Local. “We are thrilled that she and fellow owner Bill Shields will be able to reopen in time for the busy holiday season. It is testament to their perseverance and to the outpouring of community support.”

El Quetzal, named for the national bird of Guatemala, has been a fixture of Chestnut Hill retail since 1963, when the previous owner first opened in the space that had once been the Gravers Lane Cafe.

Shields, who lives in Flourtown but grew up in Germantown, took it over in the late 1980s. Then Luby, who lives in Mt. Airy, came on board in the early 2000s. Things were going very well until that day in mid-August when they woke up to the news that their store had been destroyed.

Even worse, the Chestnut Hill location – which over the years had become one of three stores, with the other two located in Ardmore and Princeton, N.J. – was the one that had the most storage space. So that’s where Luby and Shields had been keeping the bulk of their Christmas inventory for all three stores.

Given the pandemic-related supply chain issues retailers had experienced over the summer, they had been stocking up early on their Christmas items.

“Anything that had to come over in a container, you had to think about ordering early,” Shields said.

Now most of that is gone. The only items that survived are their ceramics – some of which actually did make it across the street.

As for the rest? It took five different loads of 30-foot dumpsters to haul it away.

“It was such a mess in there, you really wouldn’t believe it,” Shields said. “That was such a big job, clearing all that out. We lost a lot more than we would have liked.”

While most of the supply-chain challenges have been resolved, re-stocking hasn’t been easy. A significant number of the craftspeople who make their goods are having trouble keeping staff.

Still, they are “making do,” they said.

Reflecting over the past three months, Luby said, she can’t help but feel grateful to the community.

“It was just so very sad, what happened, so very unfortunate,” she said. “But really, everyone has been so super kind, asking how they can help and support us. It makes a big difference.”