An architect's rendering of the proposed two-story structure to be built at 2 E. Chestnut Hill Ave. by Kevin Dicciani After months of contentious dialogue regarding the development of 2 E. Chestnut … 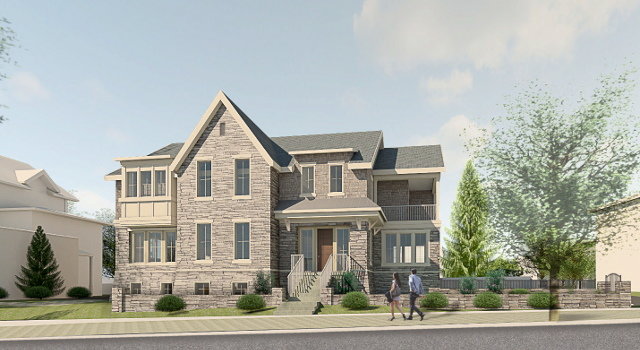 An architect's rendering of the proposed two-story structure to be built at 2 E. Chestnut Hill Ave.

After months of contentious dialogue regarding the development of 2 E. Chestnut Hill Ave., the Chestnut Hill Community Association’s Development Review Committee voted unanimously to support the developer’s plans to restore and convert the former Gallagher Dentistry Office into a two-unit home and build an additional two-story structure on the site.

The developer, Patriot Real Estate Capital, plans to restore and convert the existing building into two-unit home, with a unit on each floor. The designs also call for the construction of a two-story single-family home on the parking lot between the home and the Chestnut Hill Library.

Patriot Real Estate has been seeking a variance approval from the Chestnut Hill Community Association since January. The project originally faced four zoning refusals from Philadelphia’s Department of Licenses and Inspections. They involved: a failure to meet the required setback from Germantown Avenue; constructing multiple housing units on the same lot; change of use, from residential single-family detached to residential multifamily; and parking in the rear, a variance the developer no longer needs, as the proposed two-story structure will contain four interior parking stalls to accommodate all vehicles on the property.

Following multiple redesigns, in which the developer slimmed down the mass of the proposed structure and reduced the amount of dwelling units on the site, the Land Use Planning and Zoning Committee voted May 5 to support the project, but under two conditions. To get full approval, the developer had to reduce the height of the proposed two-story structure and move it farther away from an adjacent property. The LUPZ asked for these concessions after nearby neighbors complained about the mass of the project.

Nearby neighbors Agnes and David Richardson told the LUPZ that the new structure would encroach on their privacy and cause their backyard and sunroom to fall in shade. The Richardsons said the building was “just too big,” a complaint other neighbors had as well. Another nearby neighbor, Jeremy Heep, said that he had a petition with 28 signatures from other residents who also opposed the development. However, as most those neighbors hadn’t been attending the meetings, LUPZ co-chair Larry McEwen said the petition was “inadmissible.”

Jeremy Lecompte, of Harman Deutsch Architecture, told the DRC on May 17 that his firm had revised the project to reflect the LUPZ’s requests. He said they moved the proposed two-story structure 2 feet closer to Germantown Avenue and also reduced its height by 3 feet.

Patricia Cove, a DRC member and the vice president of preservation for the Chestnut Hill Historical Society, said the Historic District Advisory Committee “fully supported the project.” She asked the developer to pursue a preservation easement on the existing, historic building. She also asked the developer, however, to consult and work with the Chestnut Hill Historical Society before they do any work on the exterior of the existing building. Stuart Udis, of Patriot Real Estate, said the firm would comply, even though they have no plans to work on the outside of the building.

Despite the changes, Agnes Richardson said she was still concerned about her privacy. She said the windows on the second floor of the proposed structure would overlook her property. Lecompte said architects “tried to limit the amount of windows as much as possible,” but that light is needed in certain rooms.

The DRC said trees could be planted to increase privacy, but David Richardson said that “landscaping is not going to change my opinion on this at all.”

“You want to put two apartments in the existing structure – fine, I’ll support that variance,” Richardson said. “But this giant structure, no, I would prefer to see green space there. From my bedroom windows, from my backyard, now when I look out I’m going to have this giant structure there.”

Richardson said he will continue to oppose the project. He said if the developer’s plans are approved by the CHCA, his intention is to go to the city and appeal the variance.

The DRC then made a motion to support the three variances, but under three conditions: The developer needs to pursue a landscaping plan for increased privacy for the Richardsons; attain a preservation easement on the existing, historic building; and agree to work with CHHS on any exterior work on the existing building, even before the preservation easement is in place.

The motion passed with a unanimous 5-0 vote. The CHCA will vote definitively on the project at the end of this month.