Turnout in off-year elections is traditionally low, but the court elections this year could have major consequences. 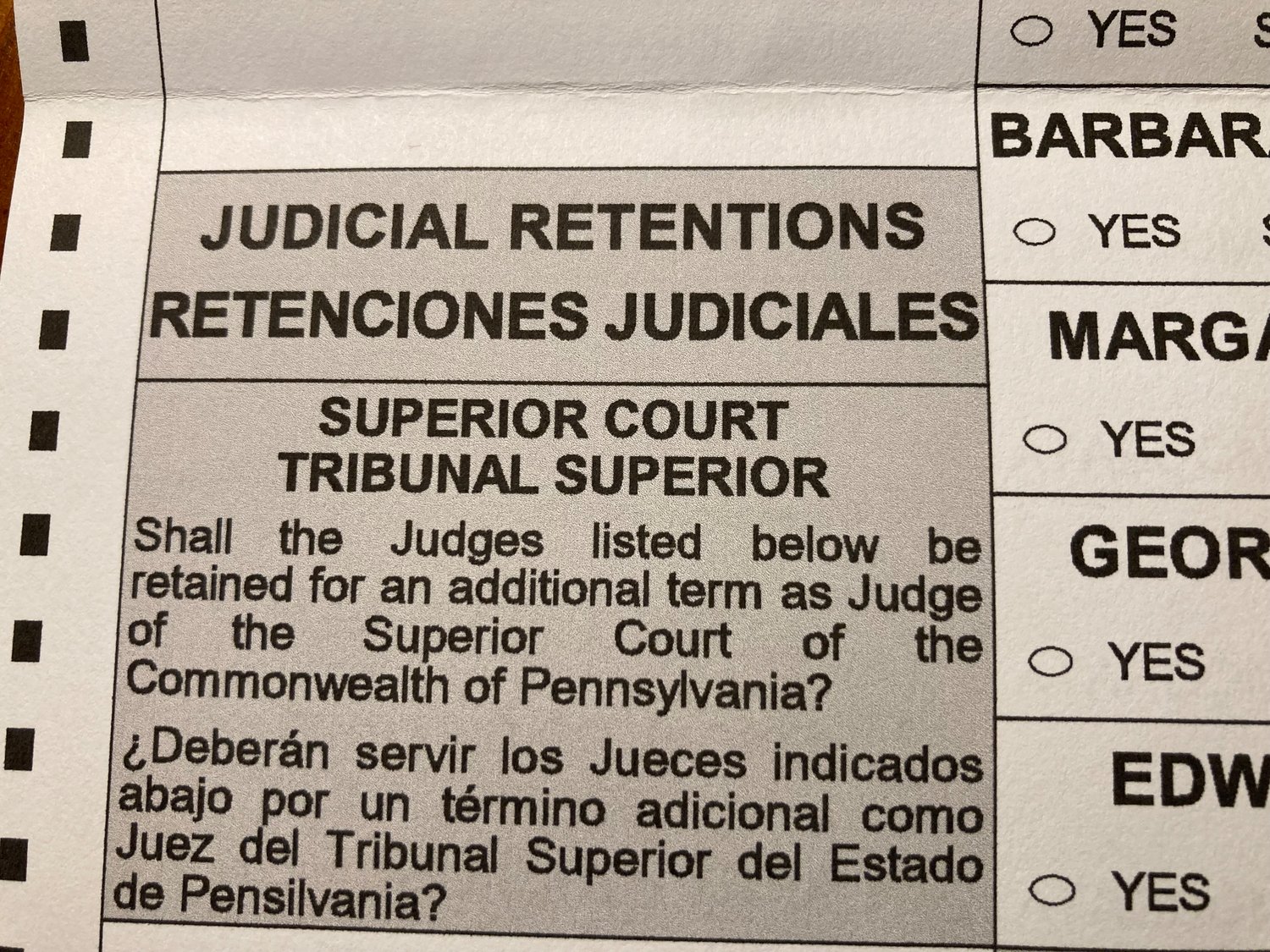 Retention elections are sometimes more difficult for voters to understand on a ballot. In an effort to avoid partisanship, no party affiliation is listed for retention candidates.
Posted Friday, October 29, 2021 7:24 am
On the Ballot

This is an off-year for elections in most of the country, but in Pennsylvania there are several important races on the ballot, with open seats on the Philadelphia Court of Common Pleas and Municipal Court, and the state Supreme, Superior, and Commonwealth Courts. Additionally, Philadelphia has a reelection for District Attorney and several other local posts.

Retention votes happen every 10 years, after a judge has been elected to the bench. Because these judges run unopposed, no party affiliation is listed, and there is generally very little information available to voters about how the judges have ruled. Unlike candidates in competitive seats, sitting judges typically don’t campaign for the job. That, coupled with the fact that sitting judges cannot publicly discuss their cases, means that most voters have very little to go on when they see the yes or no option on the ballot.

And that is something that Debbie Gross, President and CEO of Pennsylvanians for Modern Courts, is trying to change.

“People don't understand our courts and the impact they have,” said Gross. “Panel judges make decisions that impact your life. They make decisions about landlord-tenant evictions, about businesses operating, insurance relating to COVID, about wearing masks, and about health care coverage,”

The nonpartisan PMC seeks to reform the bench, and ultimately wants to see judges chosen on merit rather than by voters. But for now, the group is most concerned with helping people understand who the candidates are.

“The judges make more decisions that impact people than any other branch of government,” Gross said. “And I really think people need to educate themselves about this and about who we elect.”

In a Spotlight PA presentation last week, Kadida Kenner, director of campaigns for the Pennsylvania Budget and Policy Center, said that because voters go into the booth with so little information about the judicial candidates, it’s rare for a judge to lose a retention vote.

Pennsylvanians for Modern Courts has a list of recommendations and sources for candidate information, starting with Spotlight PA and its comprehensive reports on the top statewide seats, and the PA Bar Association’s ratings. PMC and the Free Library of Philadelphia hosted a virtual forum with the candidates for all of Pennsylvania's open-seat appellate courts, including the Supreme Court, Superior Court and Commonwealth Court. The video is available at pmconline.org/current-judge-selection-process, along with their other resources.

Gross especially recommends that voters look at the Philadelphia Bar Association report. “When I was Chancellor of the Bar Association during an election year, we sent out this poll to all 10,000 [Bar] members,” she said. “They are a good resource.”

On Saturday, the PA Bar Association criticized the campaign of Richard Brobson, candidate for the PA Supreme Court, for an ad that they said violated the the bar’s evaluation process standards. The ad implies Judge Maria C. McLaughlin ruled to free a defendant, though what she did was agree with a review panel that there should be a new trial. The Philadelphia Inquirer reported they had seen a copy of a letter from the Bar Association  to Brobson, requesting he remove the ad or issue a clarification. Brobson is still listed as “Highly Recommended” on the Bar Association’s list.

Turnout in off-year elections is traditionally low, but the court elections this period could have major consequences if there is controversial legislation or a party decides to challenge the mid-term election results. In the November presidential election, more than 749,000 ballots were cast in Philadelphia, both in-person and mail. In the May 2021 primary, there were 224,297 votes out of 1,053,467 registered voters.

Between Philadelphia and Montgomery County, there are dozens of judges up for retention. Voters who want to research their records have a few options:

Ballotpedia.org has details on judges for all of the state, with specific reports for Philadelphia and Montgomery Counties.

There are four questions on the ballot: One on legalizing cannabis, and three on funding city departments through amendments to the Philadelphia Home Rule Charter.  Question two is a request to make the existing Department of Fleet Management permanent; Three would allow departments to consider more than the top two candidates for a civil service position; and Four would provide for a mandatory annual appropriation of $25 million for the Housing Trust Fund.

Check your registration status or find a Philadelphia polling place at seventy.org/find-your-polling-place.