Enemies of Reading: Spending my birthday in Rome with the stars

The Capitol Theater in Rome, New York. by Hugh Gilmore Only one person I'd asked knew where Rome, New York, is and none of them had ever actually been there. It's understandable – very few things …

Enemies of Reading: Spending my birthday in Rome with the stars 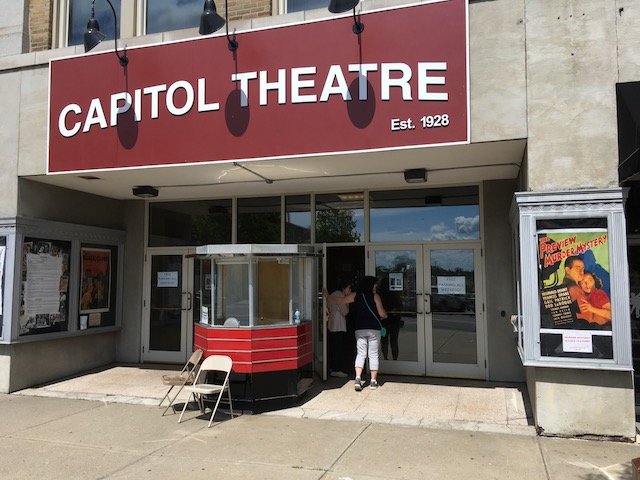 Only one person I'd asked knew where Rome, New York, is and none of them had ever actually been there. It's understandable – very few things in Rome qualify as destination tourist attractions. Three years ago I'd not heard of it myself, but then we started going to Capitolfest, perhaps the best movie festival of its kind in the nation.

My wife, Janet, and I came to Rome as accompaniment for our son, Andrew. He's the film scholar in our household, but his vision impairment keeps him from traveling much on his own. (He does see well enough if he sits in the third row of a theater or watches a movie on his laptop). Although many roads lead to Rome, it is not easy to get there. There is no air, train or bus service to it. A five-hour drive from Philadelphia is the easiest and cheapest way to get there.

This gathering of dedicated cinephiles arrives yearly for the weekend dawn-till-night showing of movies that only the most fervid filmgoers have heard of, let alone seen.

The festival's name is derived from the Capitol Theatre, a 1,788-seat movie theater that opened on December 10, 1928. It has remained in use since then, in more recent years primarily as a special-occasion venue. Seventeen years ago a devoted group of movie lovers started the Capitolfest. One of the festival's principal charms is that it tries to walk the ridge between late silent movies and early talkies. About a third of the program this year consisted of silents made between 1917 and 1926. The talkies ranged from 1929 to 1938.

Many people came quite a distance to attend. In the parking lots nearby we saw license plates from all the New England and Mid-Atlantic States, plus Georgia, Florida, Illinois, Alabama, Ohio, Michigan and Colorado. During the movies, the fans are likely to give recognition applause whenever someone like Frances Dee, William Desmond Taylor, Clara Bow, Charley Chase, or Dustin Farnum appears on screen.

The cumulative knowledge about movies and movie-making in the Capitol Theatre at any given moment would be enough to fill a very thick cinema encyclopedia. They love this festival. They are mostly gray-haired, alas – that said because I heard more than once the query "Where is the next generation of true cinephiles coming from?"

Among young people today it is quite hip to know about Bogart and Bacall, James Dean and Marlon Brando and Jimmy Cagney. "Casablanca" is part of the cultural air we all breathe in common. But all that is Film 101 stuff to the Capitolfest audience. Appreciated, but no longer on the cultural cutting edge. I shut my mouth and listen when they talk. At the festival each year a star or two whose career extended through the silents into the talkies is featured. One of the star's children, or an intimate friend, is invited to the festival as an honored guest. The first year I attended, 2017, Victoria Riskin, daughter of Fay Wray (the beleaguered heroine of the original "King Kong") was the honored guest and speaker.

The festival’s program that year included a handful of early Fay Wray silent movies. It was quite moving to hear her daughter, who had never seen these hitherto unseen movies, speak emotionally about what it was like to see her mother as such a young woman. This year, Peter McCrea was present to speak, meet, Q & A and talk about his father, Joel McCrea. Next year the films of Constance and Joan Bennett will be featured.

Another intriguing feature of the gathering comes when Capitolfest Executive Director Art Pierce introduces a film by describing the labyrinthine difficulties involved in getting the movie studios to either lend or rent the movie they're about to show. Additionally, many of the films were lost, mutilated, or deteriorated by time and neglect. Major restoration efforts by places like the Library of Congress's National Film Preservation Board and the UCLA Film and Television Archive have brought new life to many of these antique movies. As a special point of pride: Whenever it can, the staff of Capitolfest tries to show restored 35mm prints, rather than remastered digital copies.

My reaction to all this while watching the festival movies is one of continual surprise and admiration for how subtle and artistic many of these old movies are. Many of the cinematic techniques and ideas I had learned to notice about movies like Citizen Kane and Casablanca and Stagecoach had already been developed during the silent movie era.

Not having the pants-to-the-seat stamina of our son, Janet and I came and went, while Andrew watched every minute of every film. We attended the evening programs mostly and did some interesting tourism at other times. This year we 20-mile side-tripped to places like Utica (Erie Canal Lock no. 20 and then the Munson-Williams-Proctor Institute Museum of Art) and Hamilton (home of Colgate University).

At the end of the last movie on Sunday at 6:30 p.m., we said goodbye to a film buff we know from the Ambler Theater's "Hollywood Summer Nights" programs, who said, "Only 362 days till the next Capitolfest!" Here's hoping. Thank you for your birthday wishes last week.

Hugh Gilmore is the former theater editor for the Providence Eagle. He now lives and writes in Chestnut Hill.

The kids are all right, or at least they will be