Alexander Burns put up the opening date, May 5, on the marquee of Quintessence Theater when it was new in 2010. (Photo by Pamela Reichen) by Caryl Johnston Alexander Burns, 32, directs the … 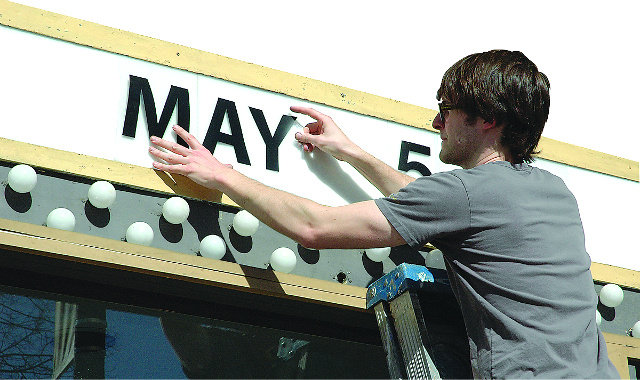 Alexander Burns put up the opening date, May 5, on the marquee of Quintessence Theater when it was new in 2010. (Photo by Pamela Reichen)

Alexander Burns, 32, directs the Quintessence Theatre, which has made its home in Mt. Airy since 2010. Four years ago an interview appeared in the Local, when Alex was just beginning his journey. He hoped at that time to perform Eugene O’Neill’s powerful drama, “Mourning Becomes Electra,” for his opening season. This week Alex is having his dream come true when this play, an adaptation of the “Oresteia” by Aeschylus, made its debut in Mt. Airy April 2, where it will remain through April 27.

It seemed like a good time to catch up with Alex and get his perspective on what his experience has brought him over the last four years. Our conversation ranged widely on themes relating to our cultural moment and classical and contemporary drama.

A native of Mt. Airy, Alex grew up under the wing of a theater-loving mother and entrepreneurial businessman father. Alex has been directing since he was three years old. “I used to corral my family and friends to act out things I had made up. I guess I was bitten by this bug very early! I have no recollection of a moment of choice about it.”

When he was 12, his family moved to London. He explained, “My father was working in a bank in London. The British educational system is such that part of the English training is just reading and memorizing the classics. Knowing the poetry of the classics was considered an essential part of life. I remember when I first got to Highgate School, the boys’ school I attended. The kindergarten class always performed a Shakespeare play. The play they were doing that year was ‘The Tempest.’ I didn’t have any experience with it, but I was just overwhelmed! I’ll never forget sitting in the high school auditorium watching those little kids perform this amazing play. And the audience was totally transported watching this seven-year-old playing Prospero!”

Alex acted in a school production of “Macbeth” as a Scottish soldier and in "As You Like It" as Rosalind. It was closer to the original Elizabethan drama of all-male casts because Highgate was a boys’ school. “Again,” he said, “it was totally new for me, but it was just part of the culture of the school. It wasn’t like we were ‘doing Shakespeare’; it was just part of your life. But there was another important advantage to going to school in England. The English education system keeps you in school later in the day, but they don’t give you very much homework. 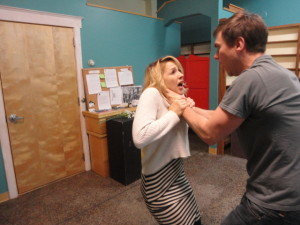 Mattie Hawkinson as Lavinia Mannon and Josh Carpenter as Orin Mannon star in the Eugene O’Neill tragedy, “Mourning Becomes Electra,” which is currently playing through April 27. (Photo by Josue Chavez)[/caption]

“As a result, my parents gave me permission to go to the theater, and there was so much theater in London — there still is — and I would go every night, usually by myself, sometimes with my parents. Going to see the plays at the Royal Shakespeare Company took me on my greatest journeys. I had always thought of the movies as being the place for the grand epic stories of war and love, like ‘Gone with the Wind’ or “Ben-Hur,” but to go to the theater and realize that it brought even greater possibilities and with even more awesome characters; this is what really spoke to me.”

Coming back to the States was a difficult transition: “We returned to the States, and I went to Germantown Friends School. But I felt incredibly trapped. I had gone from a place where I was engaged with culture on an effortless, almost natural level. It was part of the fabric of society. Everybody would go to see plays and talk about them. Then suddenly, I was back in Philadelphia. I had to make a big effort to seek out dramatic performances and when I did, I would feel like an outsider. I’d say, hey, let’s go see this play, and people would look at me like I was crazy, or else they’d say, it’s too expensive. I’d end up feeling surprised that my friends were unwilling to investigate it or see it as an opportunity. It was frustrating for me.”

Alex persisted, though, and became interested in musical theater, which was popular in America. Graduating from GFS, he went to Northwestern U. in Chicago, which has always had an outstanding drama department. He also started to do some of his own writing — “personal stuff about love” — or pieces about his grandfather, Alexander Hemphill, a Philadelphia politician who ran for mayor a couple of times. He was eager to explore any sort of issue that could be treated in a dramatic setting. He continued to ponder the differences between classical and modern theater.

“The power of what Shakespeare was able to do with language and dramatic poetry has never been topped,” he said. “In that sense he still feels contemporary. Shakespearean language sustains the dramatic action and creates character. Sure, there’s a lot of memorization, but interestingly, many actors say that it is actually easier to memorize classical drama, especially Shakespeare, because the meter, iambic pentameter, just carries you along the arc of thought.”

Contemporary American drama, he said, “tends to be emotion-based. We are into this idea that a play has to have a thesis. There’s nothing epic about that! So you get art becoming didactic or worse, pedantic, as if it has to always teach something.” Alex worked as a freelance director for a while. He describes it as “sometimes freeing but can often lead to frustration, not being able to mature. You are there when the show opens, and when it’s over, you’re gone. You hardly get to know the actors, much less the audience.”

Quintessence is a very different matter. It is a small group of dedicated actors who have been working together for several years. The company began in 2009 -2010 in New York City. At the time Alex was directing a production of “Love’s Labor Lost” at Germantown Friends School. One afternoon after a rehearsal he decided to walk home, and he was heading down Germantown Avenue in Mt. Airy when he passed by the Sedgwick Theater. Building owner Betty Ann Fellner was there, doing some cleaning. Alex knocked on the door and asked what was being done with this space. “What if I brought my theater company from New York and tried it here?” he asked. The conversations with the Fellners continued, and eventually The Quintessence came to Mt. Airy. The first performance of “Measure for Measure” was tough at first. They had very small audiences, but by the end of the run the performances were sold out, and patrons started to appear.

“It just sort of happened,” said Alex “and this is the way of good things. What I love is that every play we do is a great play. One thing that surprised me was how often I felt I had to justify doing classical theater. I guess I assumed there would be more respect for it. But I have to say that finally, by the end of the second year, people seemed to get it, and we had gained enthusiastic followers for what we are trying to do.” 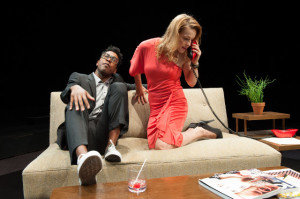 John Williams was Alceste, and Mattie Hawkinson was Jennifer in Quintessence Theatre Group's production of Moliere’s “The Misanthrope” in April of last year. (Photo by Shawn May)[/caption]

Rehearsals for “Mourning Becomes Electra” began Feb. 26. Alex describes the initial stages of a rehearsal: “Well, we rehearse from 10 a.m. to 6 p.m. five days a week. And for this O’Neill trilogy, we are taking an extra week of rehearsals. We begin by sitting around a big table, going through the play, word by word. What is every word doing? What is every line saying? Only when we’ve understood the purpose and function of every element, then and only then do we get on our feet, start to move, make the characters come to life.”

Alex left us with a few last thoughts about the American classics. He thinks Eugene O’Neill is one of the greats, and that it is unfortunate that we don’t value him more: “Here in America the idea is always new, new, new. We don’t value our masters until it’s too late. Anyone who has achieved something in a classic form is usually not as well respected as someone who is doing something new or groundbreaking. We like to tear down old buildings and build ugly new ones… But O’Neill made stunning achievements in drama. His plays are as dark and honest as you can possibly be. Maybe too, as Americans, we want to avoid looking at the dark side or face the complexity of life.”