Although he is now 77, Pinkney says he is “involved in several exhibitions these days, so I might actually be working harder than ever!”[/caption] By Len Lear Jerry Pinkney, 77, who grew up in … 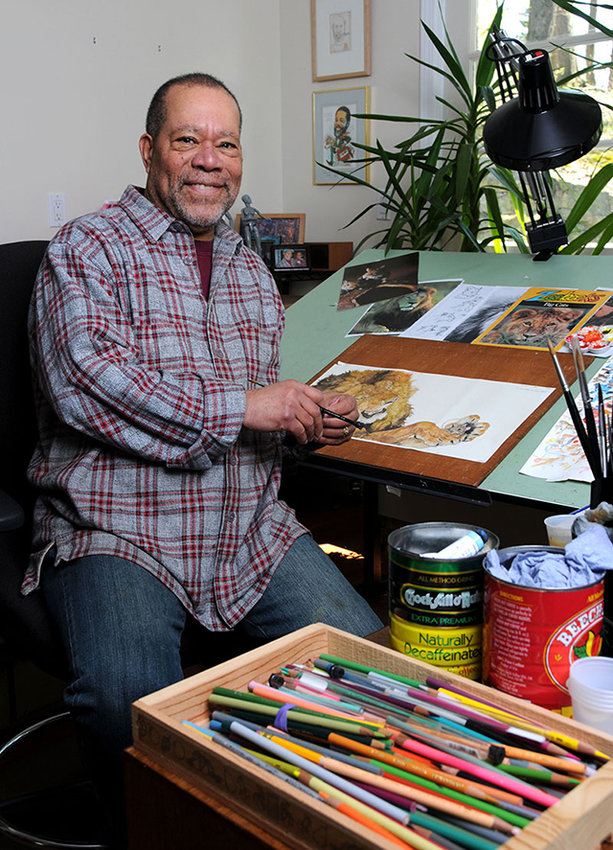 Although he is now 77, Pinkney says he is “involved in several exhibitions these days, so I might actually be working harder than ever!”[/caption]

Jerry Pinkney, 77, who grew up in Germantown, is one of the most celebrated artists in the U.S. His resume and list of awards and honors would literally be longer than most articles that run in this newspaper.

A graduate of Dobbins High School and the Philadelphia College of Art (now the University of the Arts), Pinkney has been illustrating children's books since 1964, over 100 titles in all. His books have been translated into 16 languages and published in 14 countries, and he has won a Caldecott Medal, five Caldecott Honors and five New York Times “Best Illustrated Books.” (The Caldecott Medal is awarded annually by the Association for Library Service to Children, a division of the American Library Association, to the artist of the most distinguished American picture book for children.) He has also received several honorary doctorate degrees.

An exhibit of his stunning, mesmerizing work, “The Storybook Magic of Jerry Pinkney,” opened Jan. 21 and will continue through March 26 at Woodmere Art Museum, 9201 Germantown Ave.

This exhibition highlights the unique imagination and storytelling power of this master watercolorist. Two of his books based on true stories of American history will be featured.

“Black Cowboy, Wild Horses” tells the story of Bob Lemmons, a former slave who becomes a cowboy and follows a trail of mustangs across the American West. “Sweethearts of Rhythm” captures the energy and music of the first interracial women's swing band, which performed throughout the U.S. in the 1930s and ‘40s and toured Europe during World War II. 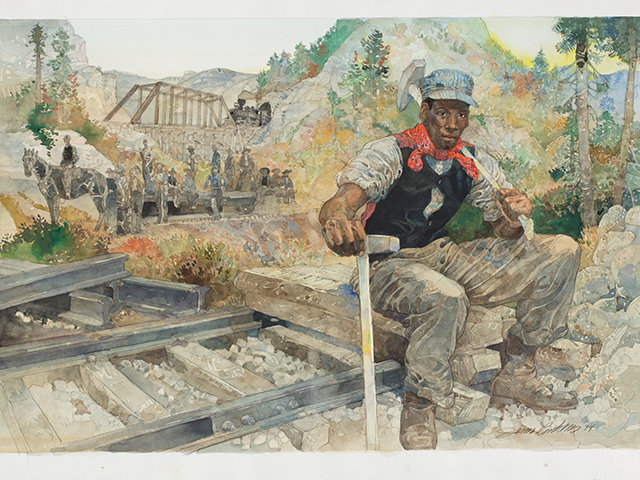 “The Legend of John Henry” is one of more than 100 children’s books illustrated by the Germantown native.[/caption]

Last week we conducted the following interview with Pinkney:

“I grew up on a block with people who had migrated from the South, and my neighborhood felt very secure and tight-knit … I went to Hill Elementary, an all-African American school, students as well as faculty. I had a sense of being moored to my roots, and being a part of this community also helped me in many ways to be able to navigate a city that was still segregated.”

“No, because as a child, I had no concept of what a professional artist did. There were no artists in my family or my neighborhood; there was no role model for me to look to and consider a career. I always had a great love of drawing as a child, but it wasn’t until the age of 13, when I met my first professional artist, the illustrator John Liney, that the seeds of true possibility were planted.”

“As far as past artists, those who work in the medium of watercolor such as Winslow Homer or Whistler stand out most to me. There are also those artists who made their reputations in children’s books, like Arthur Rackham and N.C. Wyeth. In terms of present-day artists, there are many artists working today whom I admire and seek out. Recently, I went to see one of Kerry James Marshall’s exhibitions, and I was blown away by his work.”

“Samuel Brown, who taught at Dobbins Vocational Technical High School, and Roger McGovern, who taught drawing at the Philadelphia Museum School of Art, were both early influences on my work. When I look back at my early years in Philadelphia, I can’t help but see the value of my education as well as my art education specifically.”

“I was encouraged by both my mother and father early on. My father found ways to enroll me in afternoon or weekend classes where I could receive some art training ... But later, when I graduated from high school and received a full scholarship to the Philadelphia Museum School of Art, my father was not particularly pleased with my choice to continue art education. He, among others in my community, did not fully grasp the possibility that one could study art and make a living. There was just no way for him to understand, since he too had no models for art as a career. However, my mother always felt that if you had a dream, you should be allowed and encouraged to honor it.”

“Yes, of course, but I had to be able to understand that fact in order to find ways to clear those hurdles that were placed in front of me.”

“I have two favorites. One is ‘The Legend of John Henry,’ written by Julius Lester. It’s a story that comes directly out of my childhood and fired up my imagination as a young boy, so it meant a great deal to me to bring the story to life through my art. The other is ‘The Lion & the Mouse.’ For me, that particular book was a breakthrough because it was my first wordless picture book and because it won the Caldecott Medal.”

“The Caldecott Medal means the most to me because, as the highest honor in children’s book literature for an individual book, it cements a legacy. Yet there are lesser known awards that may not carry the same impact but were still incredibly valuable to me as a bookmaker, such as those that come from the Coretta Scott King taskforce, marking my contribution to the challenge we all face with diversity in children’s books.”

“Without a doubt. With each award comes more opportunities, and I am also involved in several exhibitions these days, so I might actually be working harder than ever!”

“I live in Westchester County in Croton-on-Hudson, New York, surrounded by green space with lots of animals.”

“I don’t use the word ‘hard’ when I think about my work. I think about the challenges, and the truth is that the greater degree of challenge, the more creative the work is.”

“Work hard and believe in yourself.”

“I enjoy reading and listening to music, and I have a large family, so spending time with them is right up there as well.”

To expand on this article, there is an online catalog that will be up from the exhibition at Woodmere. More information at www.woodmereartmuseum.org or www.jerrypinkneystudio.com. Len Lear can be reached at lenlear@chestnuthilllocal.com

Live circus is back at Plymouth Meeting Friends