'Songbirds,' will be released late this year or very early next year. 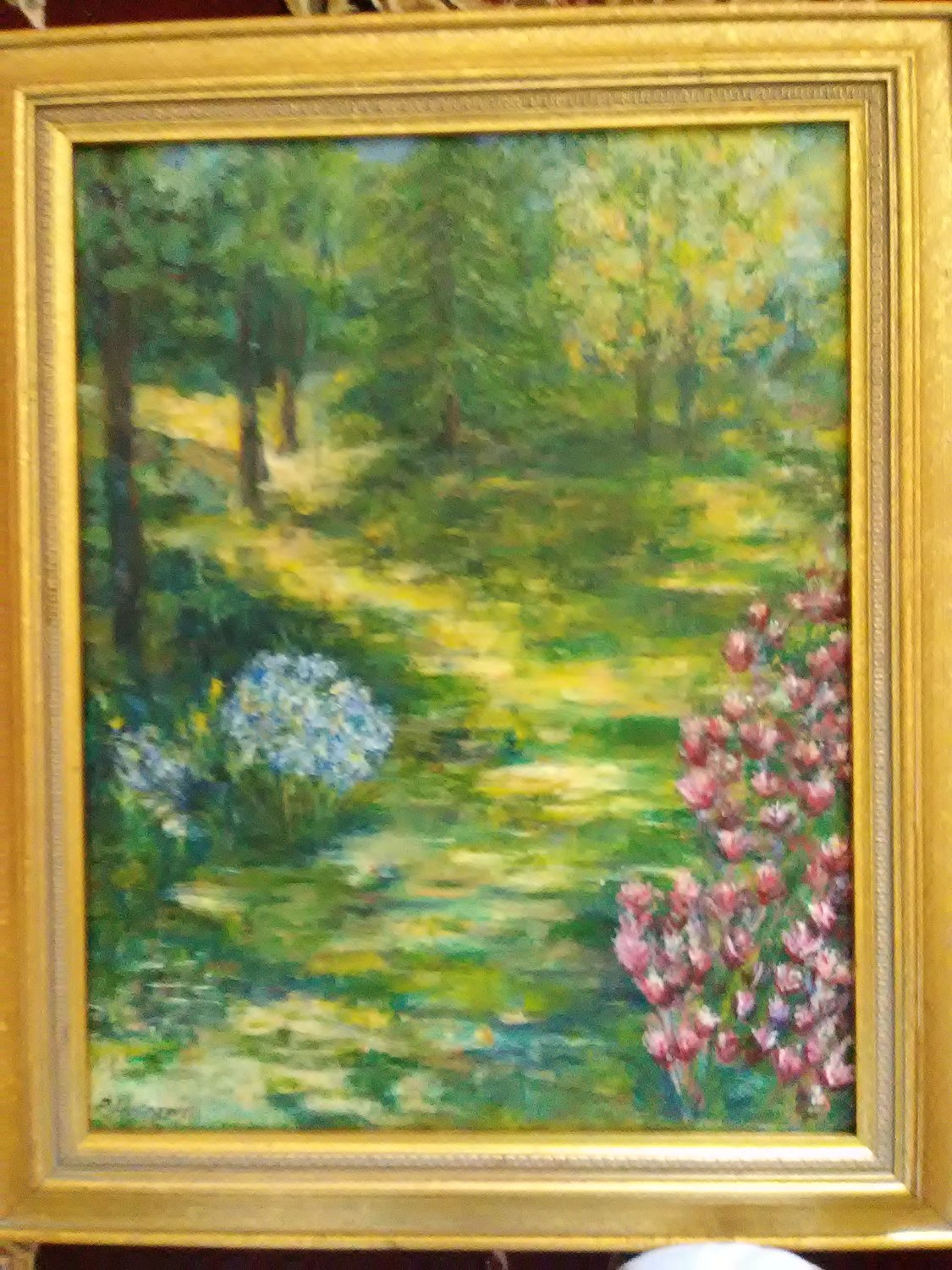 A talented artist as well as a published poet, RoseAnna's oil paintings have been extensively praised, as in this work, “The Road Not Taken.” 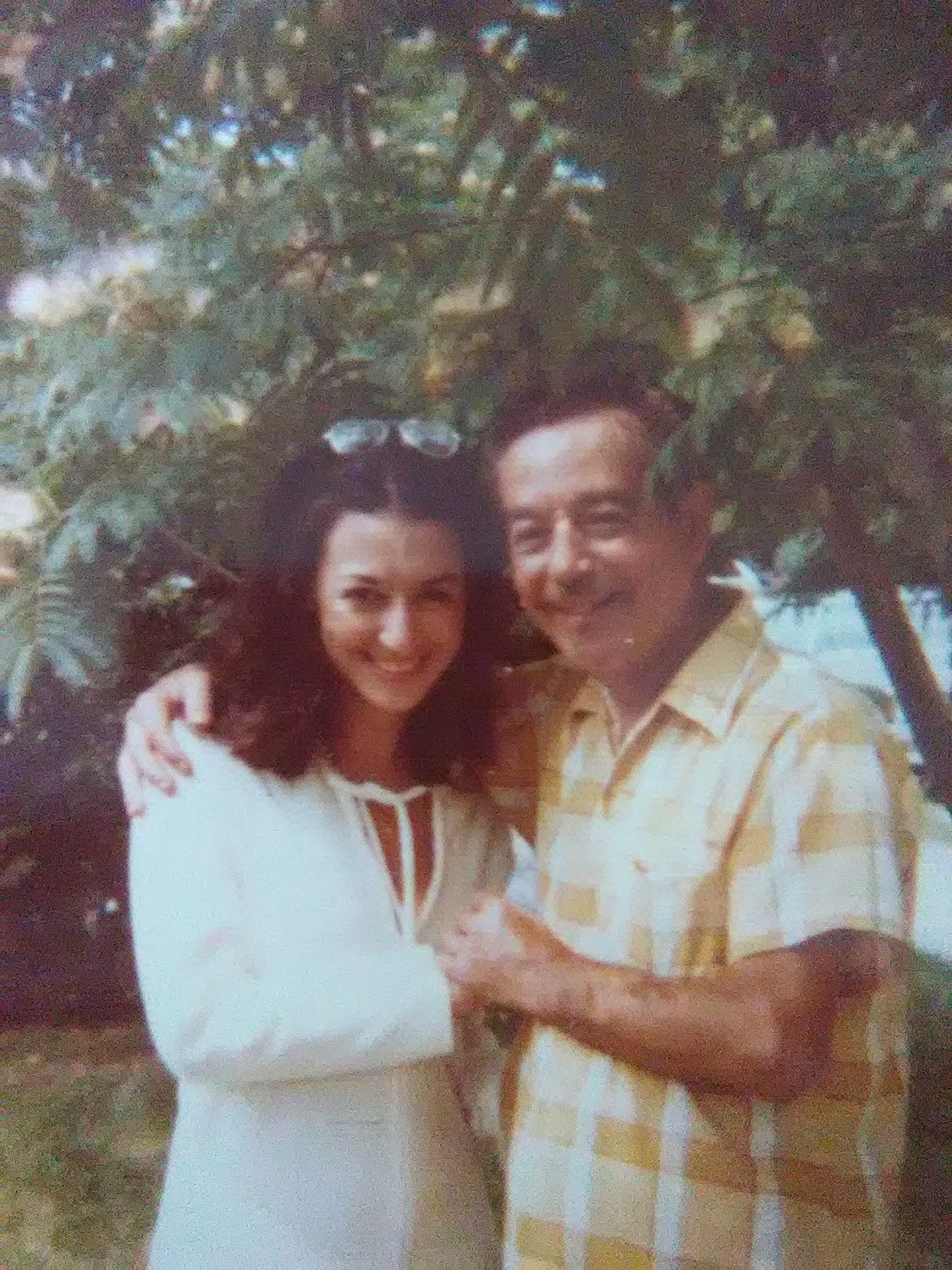 RoseAnna Lucarelli is seen in an undated photo with her late father, Filippo, who used his ingenuity to escape after being captured by the Nazis in World War II.
Previous Next
Posted Friday, August 20, 2021 9:00 am
by Len Lear

According to the latest ProQuest Bowker Report (an analysis tool and resource for librarians), nearly 1.7 million books were self-published in the U.S. last year, which is an incredible 264% increase in just five years, thanks to the ubiquitous availability of computer technology.

In my humble opinion, one of the most difficult things on earth is for an unknown, unpublished writer to have his/her book accepted by a traditional publisher. I would say the odds are about the same as the odds that I will be the Eagles' quarterback next year.

Therefore, former Chestnut Hill resident RoseAnna Lucarelli (now Doylestown) admits she was shocked when she “submitted my poetry book to a publisher, anticipating my first rejection, and surprisingly, it was accepted! Newman Springs Publishing emailed an agreement and will send a contract. My book, 'Songbirds,' will be sold on the Amazon and Barnes and Noble websites; the publisher will create a website for me, and I hope to include several of my paintings, including 'Pastorius Park,' painted when I lived in Chestnut Hill. I was told the book will be released late this year or very early next year.” Newman Springs is a hybrid publisher based in Red Bank, NJ.

RoseAnna, 72, grew up in New York and attended several Catholic schools there. She later rented a small room in a residential hotel for women in Manhattan.

“It was unbearably small,” she said, “so I explored the city. I organized my life in a few small pieces of luggage. A suitcase served as my dresser, linen closet, medicine cabinet and desk. I learned to survive on very little because I only had $26 dollars in my wallet when my husband left. I was too proud to ask my parents for money after a 10-year marriage to an attorney. Prior to that, I was an art student and modeled in a life drawing class.

“I was humiliated to model nude in front of my classmates and teacher, but I did not know what else to do. Funny, no one in art school really cared because everyone attends life drawing classes. But you cannot imagine how I felt. Sometimes, I think that I have not recovered. I only modeled nude once, but that was enough humiliation for a lifetime.”

Lucarelli moved from New York to Chestnut Hill in 2012 and lived here until 2014. She says she “loved the unique shops, the Joseph Borrelli Art Gallery, Musehouse (where writers read from their works) , Weavers Way and the Farmers Market behind the Chestnut Hill Hotel (now Market at the Fareway).

Lucarelli was an art educator and artist who was employed by the Archdiocese of New York and the Archdiocese of Philadelphia instructing students of all ages. She has participated in group exhibits in New York and Philadelphia. Her writing credits include an original screenplay, “Rose Petals,” and she has read her poetry at the New York Public Library, Barnes and Noble and Musehouse in Chestnut Hill. At one point she was director of the Mechanicsberg Learning Center in Carlisle, PA; where her husband was a Legal Aid attorney.

RoseAnna is particularly proud of her late father, Filippo, because “he did not allow poverty to define him … He attended the Conservatory of Music at Santa Cecilia in Rome, where he learned music theory and to play the piano, oboe and accordion. He became a conductor of a small town band and wrote lovely music...

“One evening in occupied Rome during World War II, my father was captured and questioned by German soldiers. Fortunately, this incident occurred in front of a church. My dear father's angel helped him speak words of courage and wisdom. He humbly asked the soldiers to allow one final prayer.

“The Nazi soldiers let him enter the church, and an angel quickly guided him toward another exit to a safe harbor called home. Throughout the years, my father's favorite Italian Thanksgiving tale was told: 'The Nazi soldiers are still waiting for me!' Grandly, he toasted them with a glass of Chianti and beautiful smiling eyes as my mother served traditional Italian and American specialties.”

When asked what person in history she would have most liked to meet, Lucarelli said, “I wish I could have known Laura Ingalls Wilder. I loved her books, strength, courage, tenacity, sense of responsibility, self-sufficiency and family values.”

The about-to-be published author is also a passionate dog lover. Over the years she has had dogs named Rags, Valentino, Nanette, Buddy, Joey, Cheri and Gracie. “I rescued Valentino from a killing shelter in New York City,” she said. “He was the most beautiful cocker spaniel in the world. He even modeled for designer Ralph Lauren.”

For more information: roseannagracie@gmail.com. Len Lear can be reached at lenlear@chestnuthilllocal.com