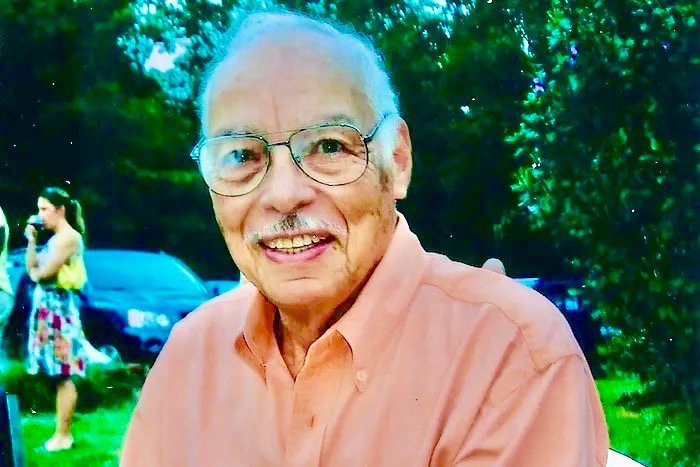 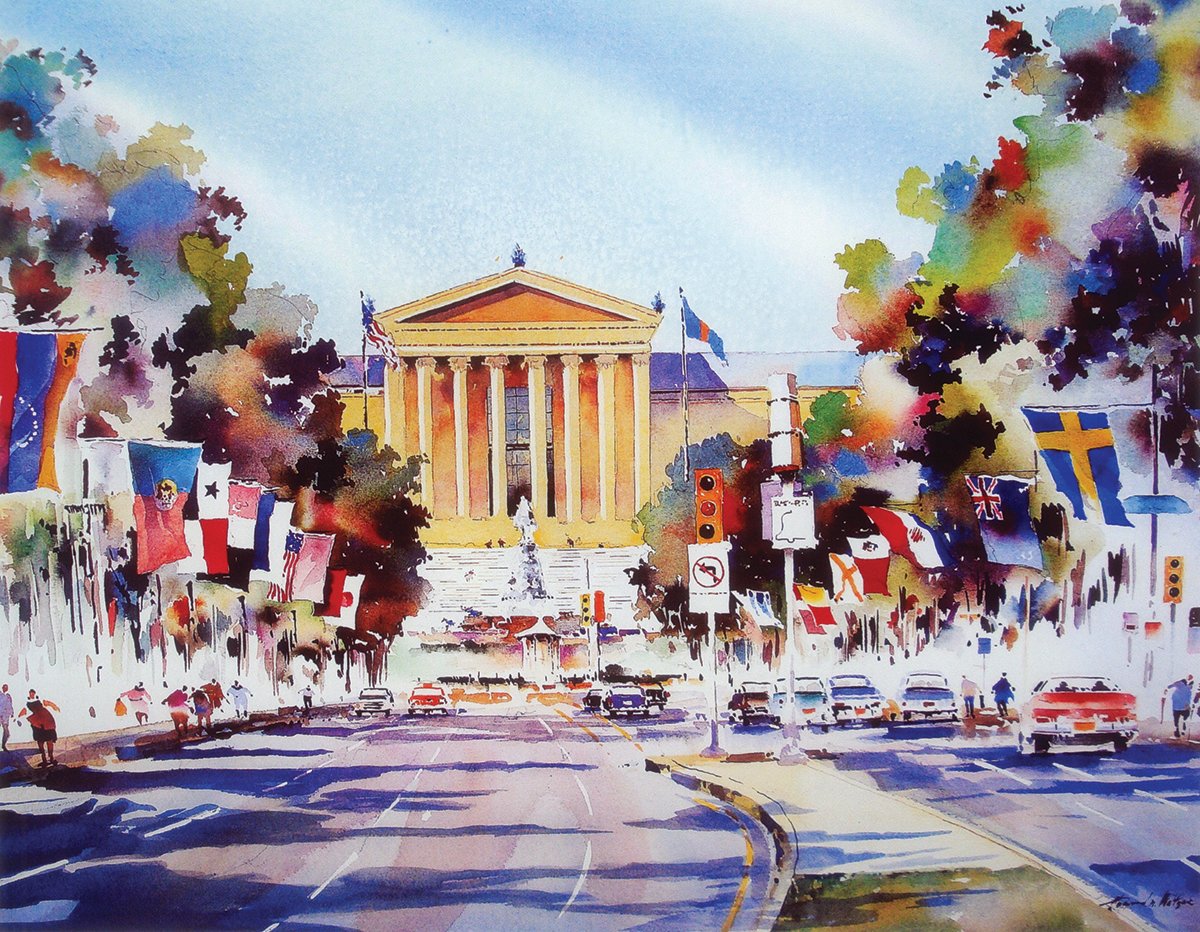 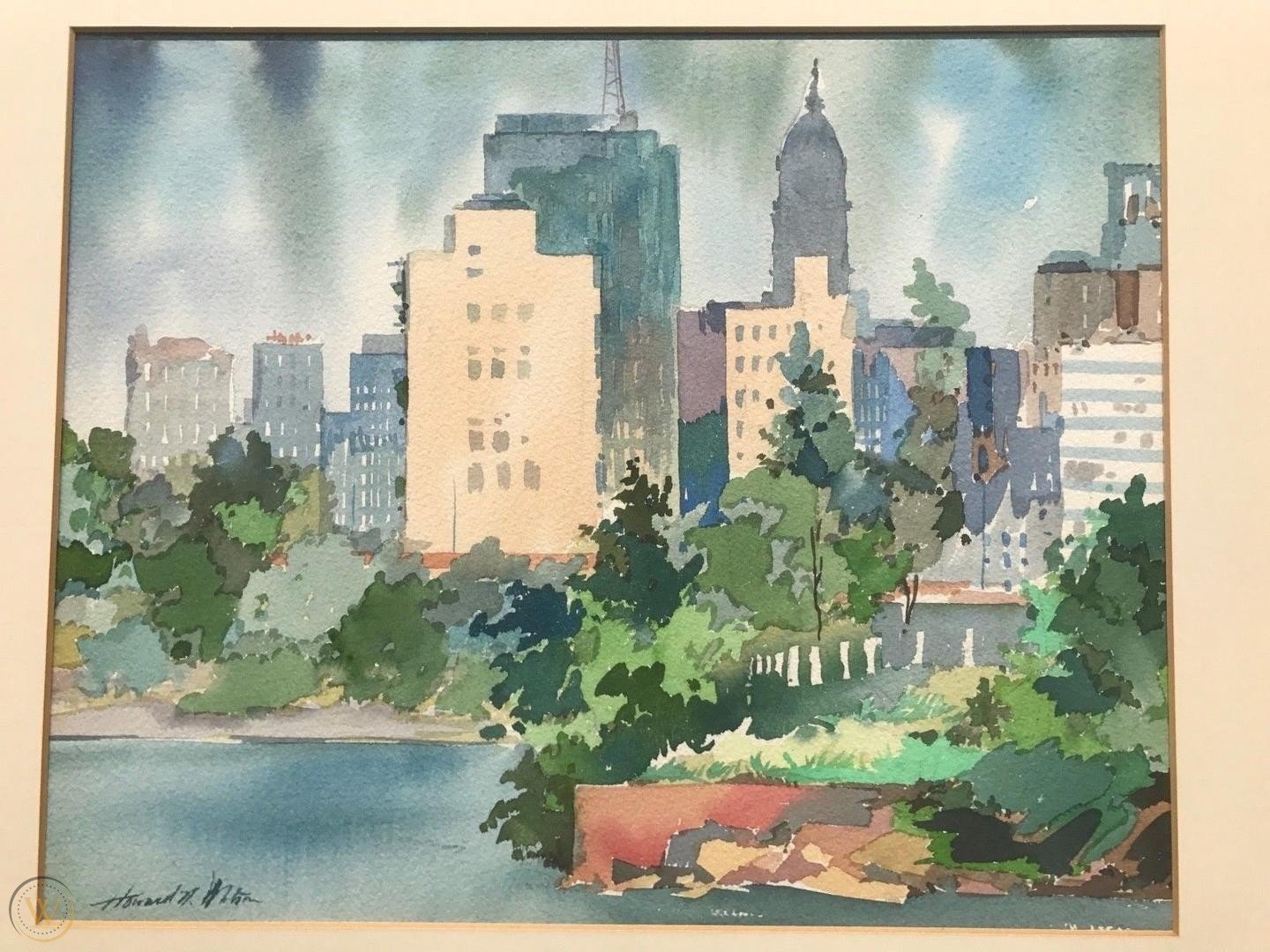 The Philadelphia skyline in Center City, as seen by artist Howard N. Watson
Previous Next
Posted Thursday, August 11, 2022 12:00 am
by Len Lear

Not long after I began working as a reporter for The Philadelphia Tribune in the late 1960s, a neighbor who lived on our floor in the Mayfair House, a former 21-story apartment building at Lincoln Drive and Johnson Street in Germantown that is now an empty lot, said to me, “You should interview Howard Watson for an article.

“He is one of the best artists in the city. I have seen his work in an exhibit, and his paintings are almost all of Philadelphia landmarks. And you won't even have to get in your car and drive to his house because his house is on this block. He lives about 100 yards from where we are standing right now.”

I looked in the phone book (remember phone books?) and called Watson. He could not have been more gracious. I walked the 100 yards to his house on the 400 block of West Johnson Street the following week and spent several hours with Watson discussing art, Philadelphia politics (I was a 22nd Ward Democratic committeeman at the time), civil rights and other pressing issues of the day.

Neither of us knew it then, but Watson, who died June 17 at the age of 93 at the Edgehill Nursing and Rehabilitation Center in Glenside, would later become a nationally- recognized watercolorist and illustrator. He was appointed artist-in-residence at the White House for former President Jimmy Carter, and his work was also commissioned by former Vice President Walter Mondale, former President Bill Clinton, singer Perry Como, Hall of Fame basketball coach Jack Ramsey and sportscaster Tom Brookshier.

During that initial interview in the late 1960s, Watson, who later moved to Wyncote, told me he was proud of being the first person of color ever hired as an artist by a Center City advertising agency, for which he illustrated ads. “People who look at my work do not know what race I am,” he said. “They make a judgment strictly on my work.”

That’s the way it should be, Watson told me, explaining that an artist’s work is their contribution to the world.

“I love the medium of watercolors more than any other, and I love the Impressionists. My paintings of local sites like Valley Green Inn, Independence Hall and the Art Museum are not meant to be photographic reproductions, as much as I do admire artists who can do that. My paintings are more like the impressions I get when I look at these sights, the shapes and forms that come into my mind's eye. That is what all great art and literature does,” he said. “After all, Shakespeare did not simply reproduce dialogue he had heard in people's conversations. He shaped them and put them in a context that left a deep impression on the educated reader. That is what I try to do.”

Watson grew up in Pottsville, the son of a professional cartoonist and photo engraver who inspired him to study art. After serving in the U.S. Air Force in Korea and Japan, he received his formal art training at Penn State University, Temple University's Tyler School of Fine Art and the University of the Arts (formerly the Philadelphia Museum School of Art).

Watson taught at Woodmere Art Museum for more than 20 years and performed painting workshops nationally and internationally. His workshops were regularly conducted at the New Jersey shore, Philadelphia, Bucks and Montgomery Counties and on Cape Cod in New England. He also presented international painting workshops at locations including Austria, Switzerland, France, Scotland, Canada, Hawaii and Norway.

Watson was represented by the Carol Schwartz Gallery in Chestnut Hill for more than two decades. “A doctor from Bryn Mawr bought six of Howard’s prints for his office last week,” gallery owner Eliot Schwartz told the Local in 2016. “His work is also popular with people from the area who are moving away or going off to college and want a painting that reminds them of Philadelphia.”

Watson told me a few years ago that he was particularly proud of his participation in “We Speak: Black Artists in Philadelphia, 1920s–1970s,” an exhibit at Woodmere Art Museum from September, 2015 through January, 2016.

He is survived by his wife, Irene, his former art student; son, Christopher, daughter, Susan, and his first wife, nee Julia Williams, three grandchildren, one great-grandchild and other relatives. His daughter, Teresa, and two brothers died earlier.