'FarmerJawn' is tilling the soil for new Mt. Airy center

Christa Barfield had no more desire to be a farmer when she was growing up than she did to be a coal miner.

'FarmerJawn' is tilling the soil for new Mt. Airy center 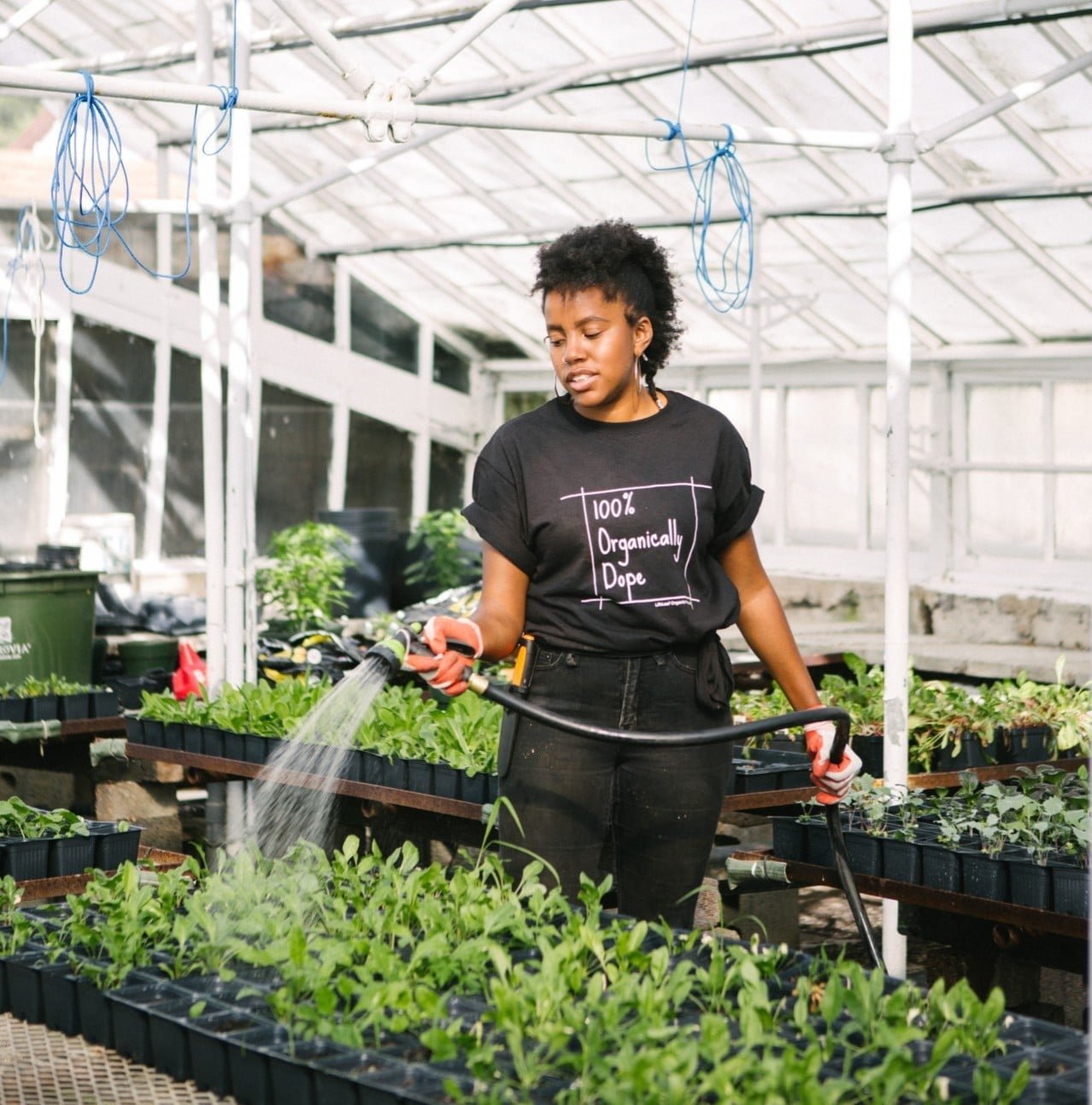 Germantown resident Christa Barfield waters the crops she has planted in of her Farmerjawn Community Greenhouses in Elkins Park.
Posted Friday, March 11, 2022 12:00 am
by Len Lear

A lifelong resident of Germantown, Christa Barfield had no more desire to be a farmer when she was growing up than she did to be a coal miner.

The mother of two teenagers, Micah and Crystal, Barfield earned a degree in health care administration from St. Joseph's University and went on to manage billing for a huge medical practice in Center City, with a staff of 23 doctors typically seeing more than 200 patients per day.

“It was very stressful,” Barfield said. “It was affecting my own mental health. I had low energy for anything outside of work.”

So after 10 years on the job, Barfield left the healthcare field in 2018 and made a 180-degree turn, opening a store called “Grow. Sip. Repeat.: Viva Leaf Tea & Co.” located at 6730 Germantown Ave. in Mt. Airy, between Westview Avenue and Pelham Road.

Why climb out on such a tenuous limb when she had no background or training for such a business? The answer is that after leaving the healthcare job, Barfield decided to pamper herself by purchasing a single airline ticket and flying to Martinique, an island in the eastern Caribbean that is a territory of France. She had no plans except to relax, swim, eat freshly grown food and seafood, forget about her former job and celebrate her 30th birthday.

“I first stayed in an Airbnb that was owned by a Thai chef who made the meals,” she said. “Also, in the morning he would take fresh herbs from his garden and make tea blends. I loved it. I was fascinated by the whole experience.”

The second Airbnb Barfield stayed in was owned by a family of three Black farmers who were deeply involved in community-supported agriculture (CSA), a system that connects farmers directly to consumers, skipping the grocery store. Usually the consumers subscribe to the CSA and pay a set fee every month in return for a box of produce and/or other farm products distributed weekly or bi-weekly. “The family was very nice,” Barfield said, “and they let me travel with them to their farm and CSA pick-up. It was the first time I saw up close a CSA in action.”

Inspired and deeply moved by the lifestyle she was participating in — eating fresh food right from the earth — Barfield knew that when she got back to Philly, she would be growing food, even though “I had never grown anything before. I’m totally self-taught. I went to a local bookstore and found some books with information about herbal medicine. I also learned a lot from the internet. A friend purchased a small greenhouse for me, and I put it in my backyard in Germantown.”

So what began with Barfield growing herbs for tea in her backyard eventually led to her leasing 2,500 square feet of land from the Schuylkill Center for Environmental Education, which has hundreds of acres of communal space in upper Roxborough. She began planting herbs and spices including ginger, cardamom and turmeric, and fruits and vegetables such as melons, lettuce, beets, plums, apples, and pumpkins.

At first, Barfield was growing food for 10 families, but word-of-mouth quickly spread. Today she has two companies, Viva Leaf Tea and FarmerJawn Community Greenhouses. She has 75 subscribers who have “rotating memberships” and says she will have many more after the current growing season.

And now, there has been such a growing crop of customers for Barfield’s produce that she will be launching a permanent garden center at her Mt. Airy location during Earth Week in April. The center will feature house plants, proprietary blends of soil, and workshops on agriculture. Although the pandemic has produced a decline in foot traffic, Barfield said, she is optimistic that business will bloom with the return of a normal spring and summer season.

In addition to the space in upper Roxborough, Barfield leases five acres of farmland and greenhouse space at an estate in Elkins Park. Volunteer opportunities are available for those who want to learn about farming and gardening. In the past, some volunteers have wound up with jobs on the farm. Barfield's Viva Leaf Tea is currently available at DiBruno's upscale markets, and according to Barfield, it will soon be available in all three Weavers Way locations.