Her brand, which she calls The Vault, is the first online luxury designer resale shop to offer high end clothing to the disabled as well as able-bodied people. 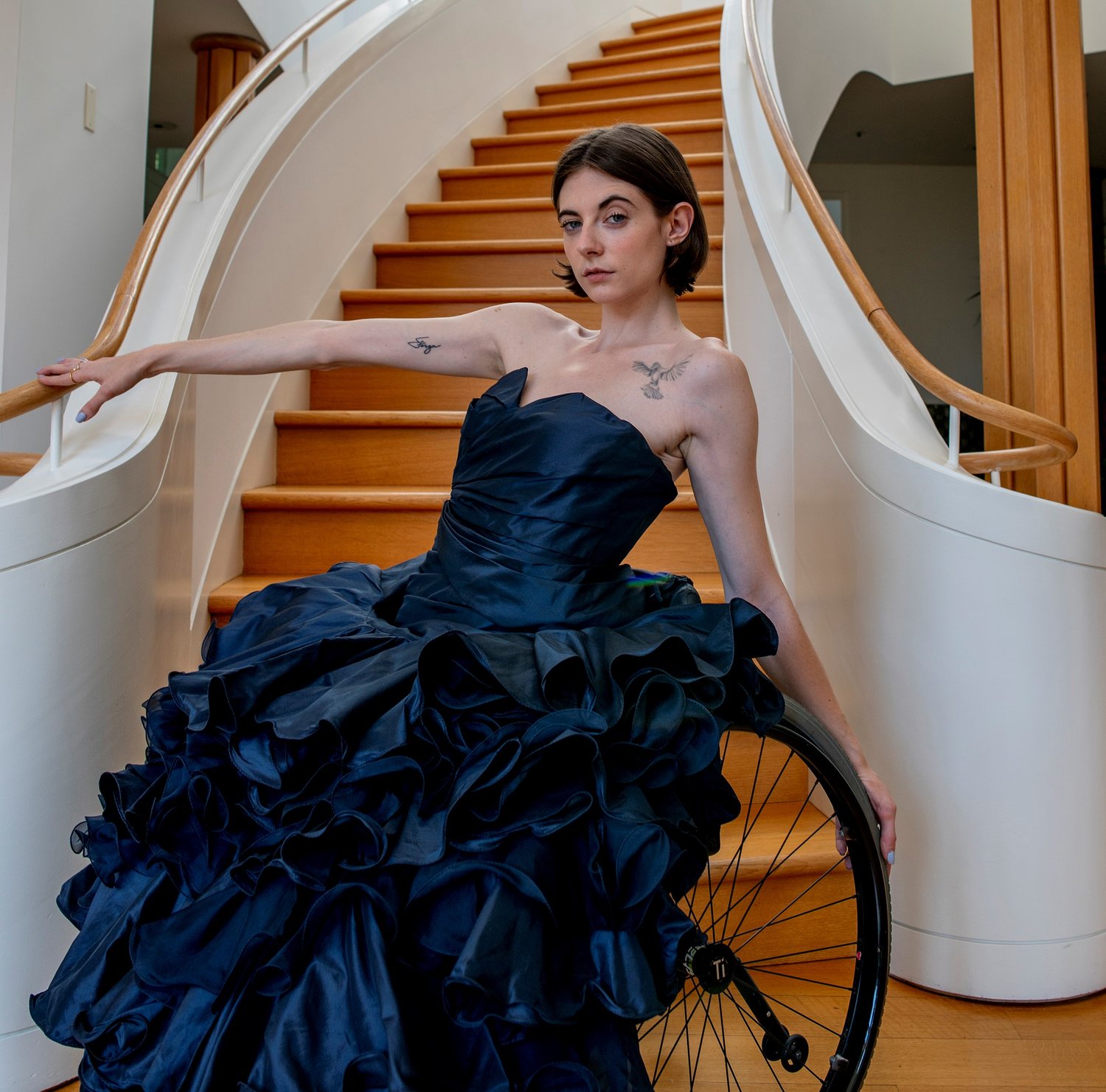 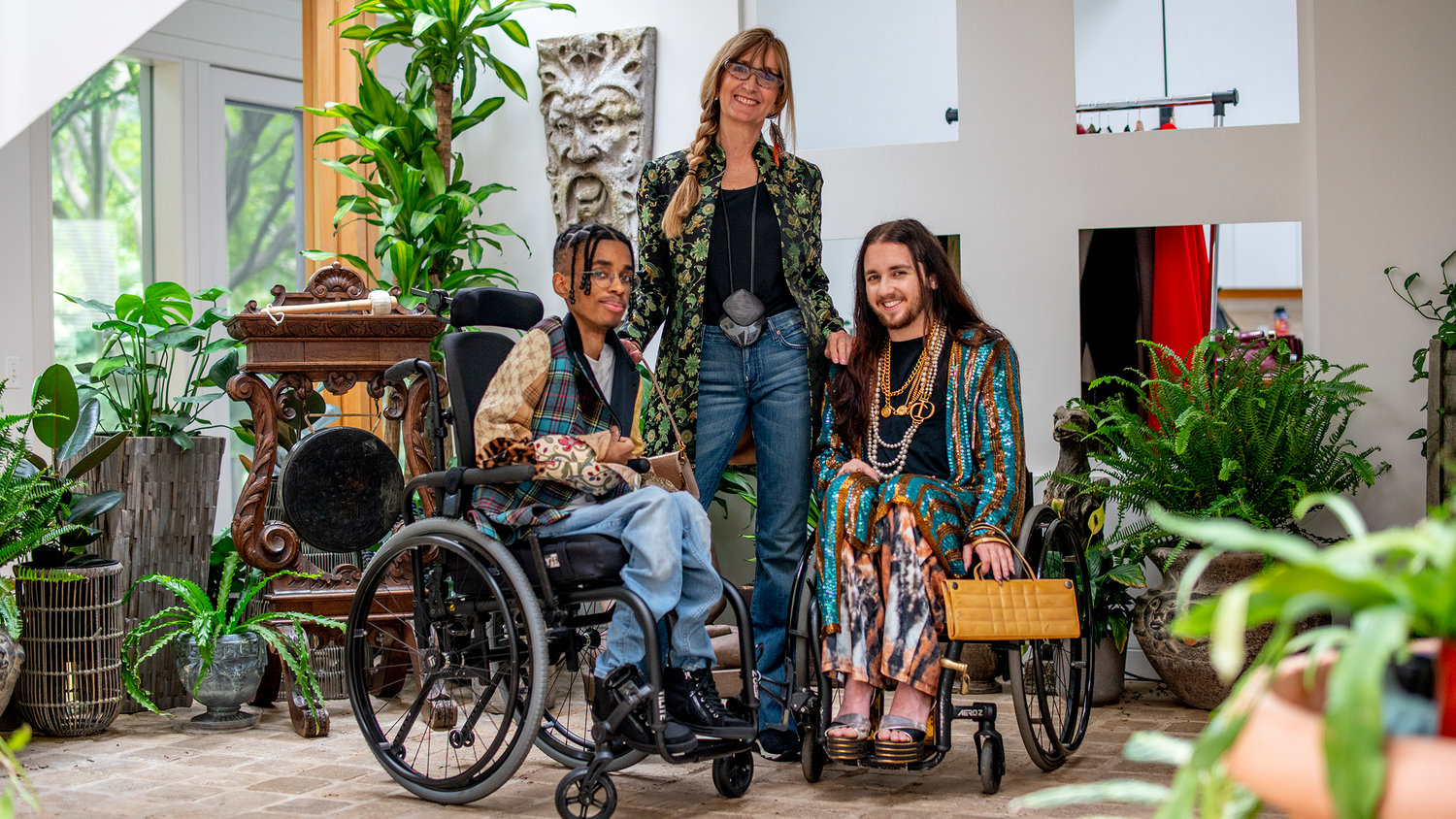 Upscale consignment shops often thrive in affluent communities like Chestnut Hill, where they provide a cost effective way to recycle designer duds and support sustainability in the process.

But Flourtown based fashion designer Nancy Volpe Beringer is taking the concept to a whole new level.

Her brand, which she calls The Vault, is the first online luxury designer resale shop to offer high end clothing to the disabled as well as able-bodied people. It’s a game-changing concept that makes it possible for young people confined to wheelchairs, as well as people with dwarfism, to show up to the office or social gatherings in Chanel, Gucci or Burberry.

“I never dreamed of having the option to alter a piece of clothing in a way that works for my body and my wheelchair,” said Bri Scalesse, a model and disability advocate who appears in a strapless satin gown by Oscar de la Renta on The Vault website. “I’ve so often had to sacrifice function for fashion, or fashion for function. The Vault gives me a chance to blend both.”

Here’s how it works: Each purchase comes with an optional virtual design consultation, and shoppers can customize their items to their unique special needs with a drop-down menu.  Beringer alters the outfit at no cost with options that include replacing buttons or zipper closures with a choice of hook and loop or magnets, providing a port opening, and adapting the waistband and neckline to make the garment easier to take on and off.

Beringer, who holds a teaching degree in business management and left a successful career with the New Jersey Education Association to enroll in Drexel University’s Fashion Design Program at 61 years old,  said her commitment to making luxury fashion accessible to a market largely ignored by the industry was ignited in 2019 during her participation in the popular fashion television series, “Project Runway.” Then 64 years old, she was the oldest designer ever to appear on the show.

“Our challenge was to design a red carpet look for the Tokyo Olympics. All the models were able bodied, except for one in a wheelchair,” Beringer said. “When they matched me with her I was elated.”

Her Project Runway model was Tatyana McFadden, an American Paralympic athlete, and the fastest female wheelchair racer in the world. She is paralyzed from the waist down.

“I asked Tatyana to explain her fantasy regarding the design and function of her outfit. She wanted to show off her shoulders, but not her legs, and she wanted a train,” Beringer said. “I knew at that moment that was why I was on “Project Runway” – to design adaptive clothing. It changed my life forever.”

The appeal of resale luxury fashion is not new to Beringer who, over the years, amassed a large collection of designer brands by frequenting consignment shops.

With her five-foot-seven-inches tall, lanky frame and signature braid (which she is growing to donate), Beringer could be mistaken for a model.

In 2019, the same year she competed on “Project Runway,” a fire broke out in Beringer’s design studio and destroyed her collection. Beringer moved her store online. Judging from her website, she wasted no time in restocking the brands fashionistas crave, including: Valentino, Manolo Blahnik, Etro, and Jean Paul Gaultier. And thanks to fashion photographer Kyle Lindstrom, her website looks like a Vogue fashion shoot.

The accolades, invitations and requests have been pouring in ever since.

“I get messages expressing gratitude from around the world in response to my Instagram posts,” she said.

Her brand is now a finalist for Fashion Group International’s Rising Star Award in their New Retail Concept category, and also for a Diesel Sustainability Award, sponsored by the national denim clothing store of the same name. (Past winners of the Rising Star Award include Jason Wu who was catapulted to fame when First Lady Michelle Obama wore his ball gown to her husband’s Inaugural Ball.)

This month, Beringer traveled to New York City to attend the GLAAD Awards. She  designed a red carpet look for Gloria Allen, the 72 year-old  Black transgender icon from Chicago who is known as “Mama Gloria.” Beringer said “designing for the LGBTQ community is part of my commitment to inclusivity.”

One of her models, Julian Gavino, was selected to appear on billboards promoting transfemme advocacy, while another model, Jillian Curwin, is an advocate for her community of people with dwarfism. And Beringer is dressing Scalesse in a vintage Chanel jacket, Gucci leather skirt and Prada handbag for an upcoming event.

“Fashion is about empowerment and expressing individuality. Everyone should be able to do this in a sustainable way,” said Beringer, who is open to consigning designer brands from anyone and selling to everyone.

Beringer grew up in Levittown, and lived in Northern New Jersey, the Art Museum neighborhood in Center City and Bryn Mawr before moving to Flourtown in May 2021.

Exercise caution before you hit the trails