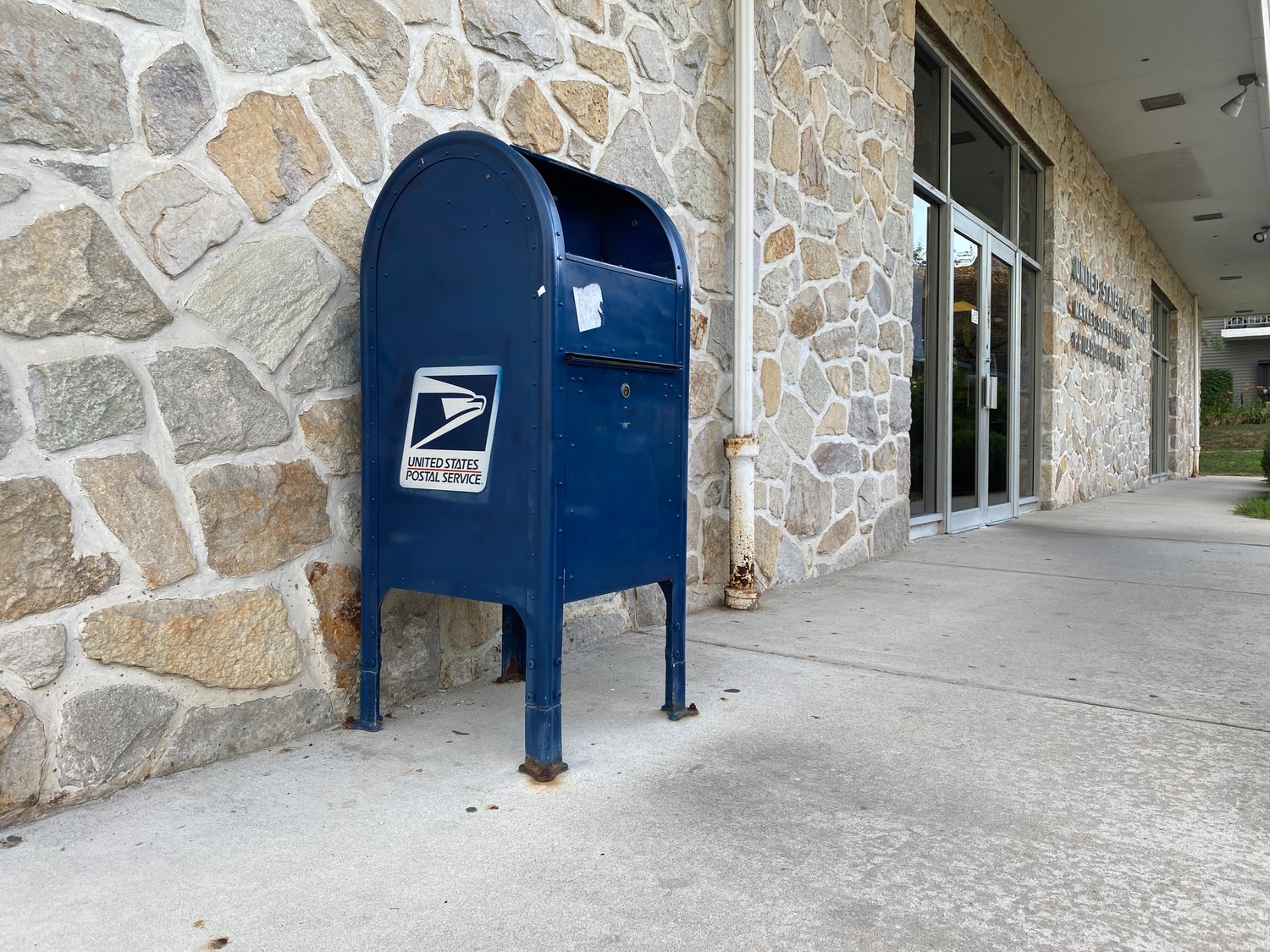 The USPS collection box in front of the Market Square Post Office in Chestnut Hill is the site of where at least a few of the Local's sources had mailed checks that were later washed and stolen. (Photo by Tom Beck)
Posted Thursday, August 4, 2022 9:59 am
by Tom Beck

More details have emerged this week in the U.S. Attorney’s arrest of three Philadelphia-area men - Naod Tsegay, Fode Bangoura and Zyier Williams - for washing and stealing checks from USPS mailboxes.

Still, it remains unclear whether these alleged offenders have anything to do with the more than 20 instances of washed and stolen checks documented in the Local over the past several months.

According to the charging document, these three men stole checks from USPS mailboxes between the months of March and June 2021, which is before any of the cases the Local has documented.

The U.S. Attorney’s office spokesperson, Jennifer Crandall, wouldn’t comment on whether Tsegay, Bangoura and Williams could be related to any additional cases of washed and stolen checks in Chestnut Hill or Mt. Airy.

In the wake of the recent charges, four more readers of the Local reached out to the newspaper last week to detail their experiences with stolen checks. The first three asked to remain anonymous.

The first source, a Chestnut Hill resident, had a check stolen and washed for a whopping amount - $30,000. The check was one of four he deposited into the mailbox on the corner of Germantown Avenue and Gravers Lane on March 14. The source later filed a police report. When the police officer took the report, she chuckled, the source said.

“The comment [from the officer] was ‘that seems to be going around,’” he said.

The check was originally sent to the Internal Revenue Service. The other three checks, which were sent to the Pennsylvania Treasury, the city and the source’s home’s alarm company, all disappeared in the mail.

The source, who is the CFO of a Philadelphia-area company, eventually got his money back - on July 22 - but that’s not the only time the source had to fight for the return of his money.

In May, an official from his bank, PNC Bank, contacted him and said that someone had impersonated him at a PNC branch in Maryland and tried to withdraw $25,000. The bank was suspicious and the person did not make off with any cash.

But later that day, the impersonator tried a different PNC branch in Maryland. This time, the person successfully made away with $10,000, although the source’s money has since been returned.

Two weeks after the incident at the Maryland PNC Branch, the source got a knock on the door. It was from a Philadelphia police officer who told the source that they received information from a jurisdiction in New Jersey that somebody had copies of the source’s credentials, including his driver’s license.

“You should probably put blocks on all of your accounts,” the source said the officer told him.

The second source wrote a check for his father’s funeral expenses on February 5 and mailed it the same day. He’s not completely sure where he mailed it, but it was definitely mailed either from the mailbox on Gravers Lane and Germantown Avenue or the one in front of the Chestnut Hill Post Office on Germantown Avenue, he said.

“I found out a few weeks later that the funeral home never received the check,” the source said. “About a week or two after that, I was looking online in the PNC account and you can click on the icon to see the actual check and it showed that…somebody took white-out and wrote out the name of a woman.”

That woman, Jessica J. Jimenez, was not a name the source recognized. The amount of the check had also been whited out and replaced with $7,500.

“It looked really fake,” the source said. “If they had even the most minimal amount of security looking at this check they would have picked it up in a second.”

Because the check was so “phony,” the source suspects it was deposited via an ATM or an online app where a human being didn’t actually look at it.

Pictures of the check reveal parts of the original handwriting that weren't completely wiped out. When the source met with the manager of the Chestnut Hill PNC in person, the source said he was told that there were “at least 50 people alone that this happened to around Chestnut Hill.”

Eventually the source got his money back, but said it was “a real hassle.” He commended the workers at the Chestnut Hill PNC branch for being helpful, but said he was less enthusiastic about dealing with the “higher ups” in the fraud department.

“I left multiple messages and they never called back,” he said. “It was great that they took care of it, but it was a real hassle that it took so long.”

Eventually, the source’s money was returned around the end of June or early July.

The third source, a Chestnut Hill resident, never had any funds stolen, but six of her checks - all mailed on April 17 in the mailbox outside the Market Square shopping center post office on Crittenden Street - were lost in the mail.

Most of the checks were for tax payments. Two were mailed to the IRS, two were to the Pennsylvania Department of Revenue and one was to the city to pay school taxes. The remaining check was to the Philadelphia Parking Authority to pay a parking ticket. The five tax payments were drawn from the source’s brokerage account. The check to the Parking Authority was drawn from her account with PNC Bank.

“I got a notice from the IRS that my taxes had not been paid,” the source said. “I contacted the brokerage firm where the checks had been written and none had been cashed.”

Going forward, the source said she’d continue to mail checks, but not from the USPS’s blue collection boxes. Since the source has a suburban-style mailbox in her front yard, she said she’ll use that instead.

The last source, George McNeely, who also occasionally writes a column for the Local said that his $92 check made out to the Philadelphia Water Department was turned into a $5,640 check made out to “Alivia Atwell” - a name he didn’t recognize. The check was mailed from the collection box at Germantown Avenue and Gravers Lane.

He first noticed when he saw his checking account with Citibank was overdrawn.

“I went online and looked at the checks and figured out this check had been rewritten for $5,640,” McNeely told the Local. “I immediately called Citibank and reported it to fraud.”

McNeely also filed a police report and reported the fraud to the United States Postal Inspection Service. While he was filing a police report, he ran into a woman and a couple who were at the precinct to report the same exact thing.

“It’s clearly exploded,” he said. “It was just really weird. We were all standing there laughing that it was just such a weird coincidence.”