The Patriots may have slipped to 2-2 in league play with that outcome, but even the traditionally stronger Inter-Ac teams are no longer assuming they'll be writing down a "W" where Germantown Academy's name appears on the schedule. 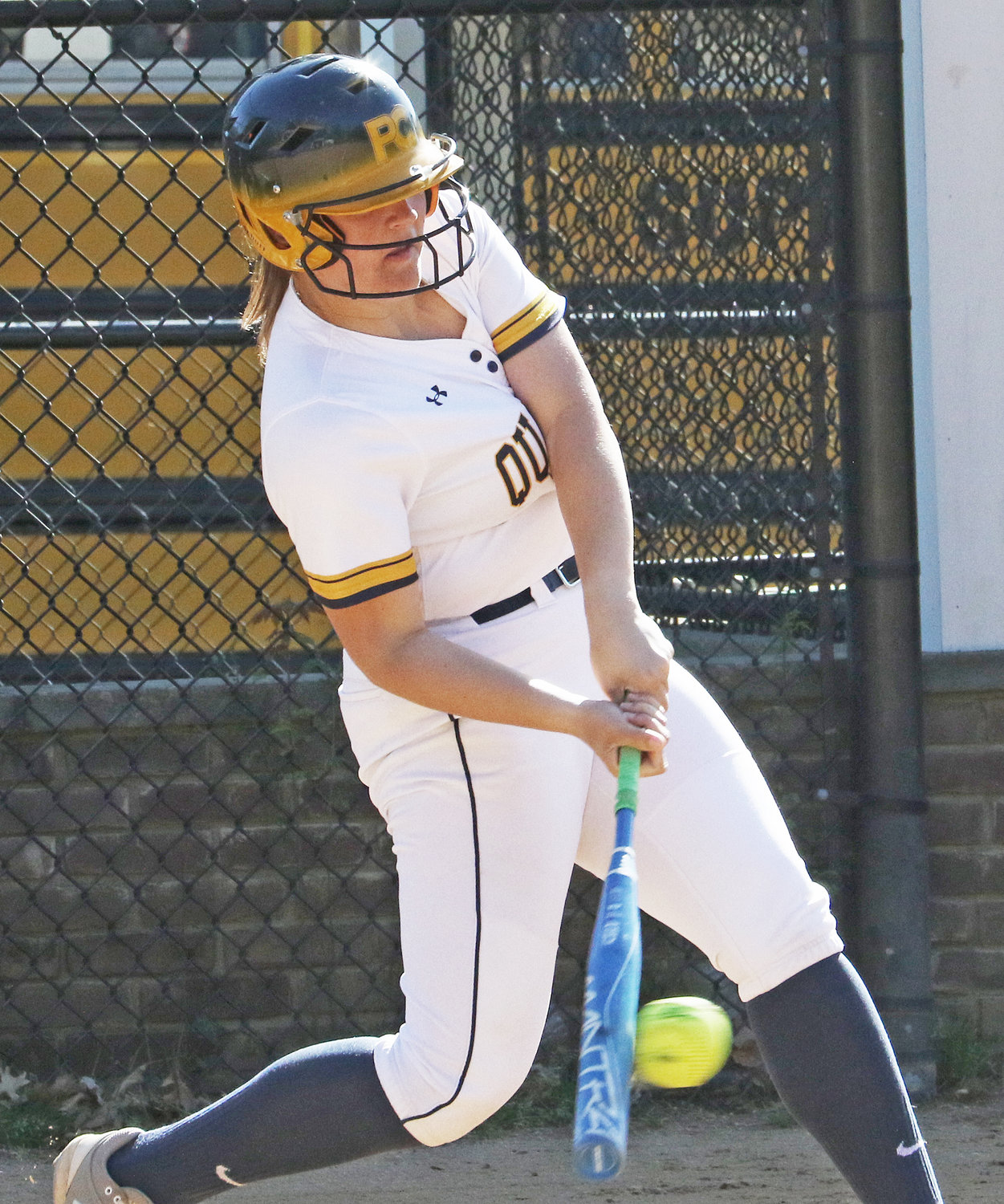 Reaching low for this pitch, Quakers sophomore Macie Bergmann doubled to left field. Next time up, she hit a game-winning two-run homer. Photo by Tom Utescher 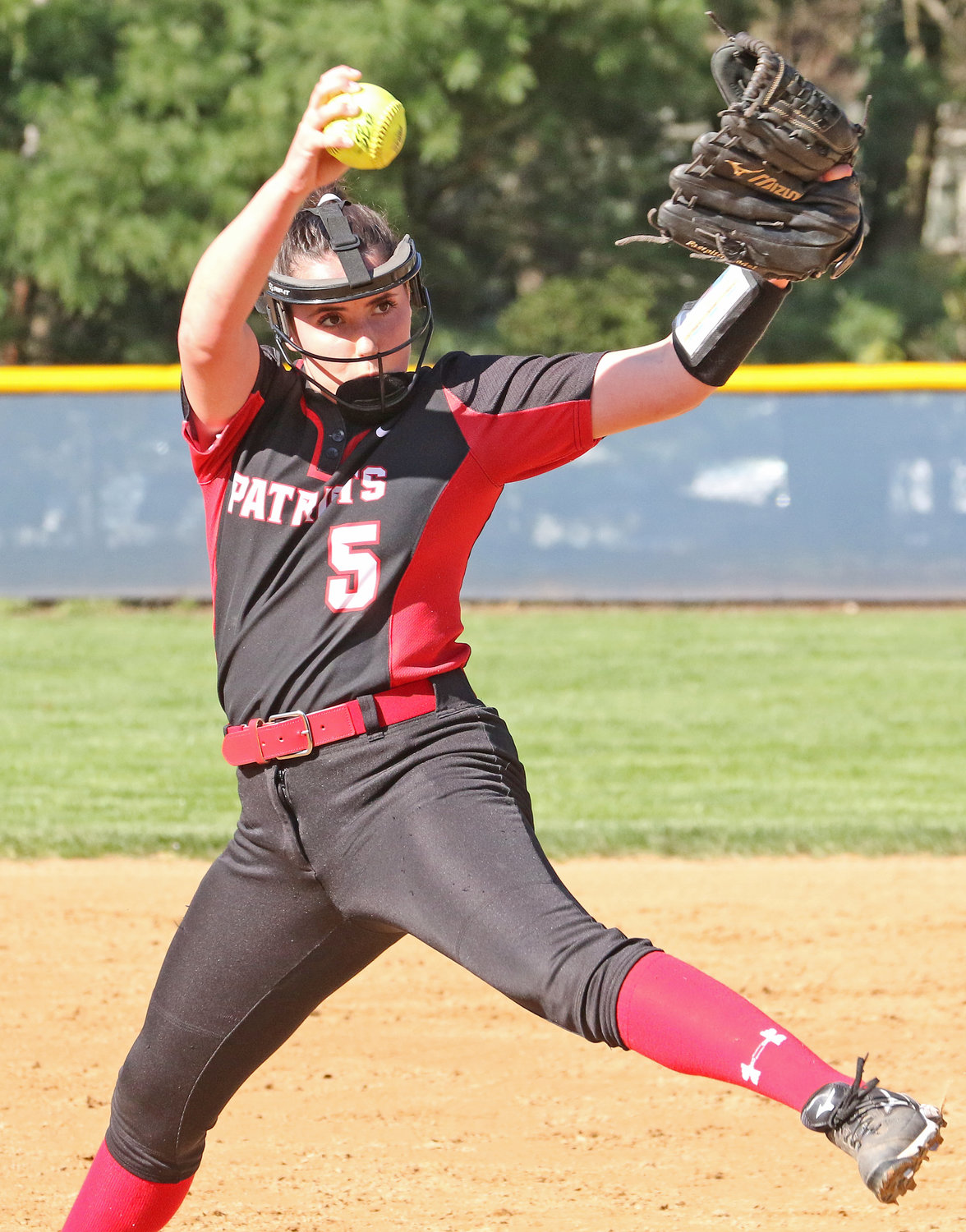 Paying a visit to longtime Inter-Ac League softball power Penn Charter, an improving Germantown Academy franchise took a 2-1 lead in the second inning and was still ahead by that score midway through the fifth. In the bottom half of that frame, an RBI double by senior catcher Luci Boggi tied the contest for the host Quakers, and the next batter, sophomore third baseman Macie Bergmann, bashed a two-run homer that resulted in a 4-2 victory for PC.

The Patriots may have slipped to 2-2 in league play with that outcome, but even the traditionally stronger Inter-Ac teams are no longer assuming they'll be writing down a "W" where Germantown Academy's name appears on the schedule. The Pats claimed their first league victory this spring by beating Baldwin School, winner of the one-off Inter-Ac tournament at the end of the 2021 season.

GA is in its second season under head coach Sarah Zimmerman, who is also a member of the faculty at the school and should provide long-sought continuity for the softball franchise.

Meanwhile the founding coach of the Penn Charter program, Donald "Doc" Mittica, is sitting out the 2022 season. The designated interim head coach is Melissa O'Connor, an Ohio native who works in forensics for the Philadelphia Police Department.

Earlier this month, the Quakers (2-1) lost to Springside Chestnut Hill Academy and then defeated the Academy of Notre Dame. In another Inter-Ac clash back on April 14, SCH suffered its first league loss at the hands of defending champ Episcopal Academy, now the undefeated league leader.

Last Tuesday at PC the starting pitchers, junior Clarissa Smith for GA (10K, 1BB) and freshman Ryan Hatty for Penn Charter 92K, 0BB), both went the distance for their respective teams. The Quakers had a 6-5 edge in the hits column.

The Patriots left a runner on first base in their initial batting turn, and as the bottom of the first got going two strike-outs were sandwiched around a walk to PC eighth-grader Maddie Wray. Sophomore Macie Bergmann, who also began playing varsity softball as an eighth-grader, singled over the head of the second baseman to move Wray to second.

Freshman Lauren Gedraitis drove the ball close to the line in right field, and Wray was able to beat the throw to the plate to score the game's first run. A third strike-out for GA's Smith retired the side, and then the Patriots took a 2-1 lead in the top of the second.

Emily Spillane, GA's junior catcher, led off with a single between shortstop and third base, but was forced out at second as her classmate Kayleigh Howard reached first on the fielder's choice. A ball belted to right field by freshman Liv Reynolds skipped off the top of the fielder's glove, and the visitors had runners on second and third.

Sophomore Noa Shapiro hit the ball directly down the line in right field, winding up on second as both runners ahead of her scored. Two outs followed, but in the home half of the inning the Quakers went down in order to keep the score at 2-1 in favor of GA.

Those numbers stayed on the board through the middle of the fifth inning. PC had runners on second and third with two outs in the third, then they were left hanging as GA's Smith logged another strike-out. Reynolds singled for Germantown in the top of the fourth but was left on, then Smith struck out the side in the bottom half.

GA came close to adding to its total with a two-out rally at the top of the fifth. It began with a successful bunt by freshman Alex Johnson. Smith smacked a hit to right centerfield, and on PC's throw to third base Johnson slid under the tag, allowing Smith to reach second.

The two GA runners were stranded when the next batter grounded out to Charter's Bergmann, at third. She had also logged the first two put-outs of the inning. Patriots batters enjoyed success early in the game with balls hit to the right side, but later on there were more grounders traveling in the direction of Bergmann. The sure-handed sophomore made GA pay for that.

In the bottom of the inning, though, it began to look like the visitors would retain their slim lead as the first two PC batters were dispatched on a ground-out and a tag in the baseline on a bunt.

A two-out rally began when Wray sent up a perfect Texas-League single to the dead zone behind second base, just out of reach of everyone. Next up was Charter's senior catcher, Boggi, who had struck out in her first two at bats. Now she made solid contact, hitting a ball to right center that bounded past the centerfielder. Boggi reached second as the tying run scored for the Quakers.

PC's Bergmann had singled and doubled earlier. Now she rolled out the heavy artillery, bashing a decisive home run ball over the fence in left center. A ground out got the Patriots out of the inning, but the 4-2 final was now on the scoreboard.