“Why do we still need libraries now that almost every kid has a virtual Google library in their pocket?” 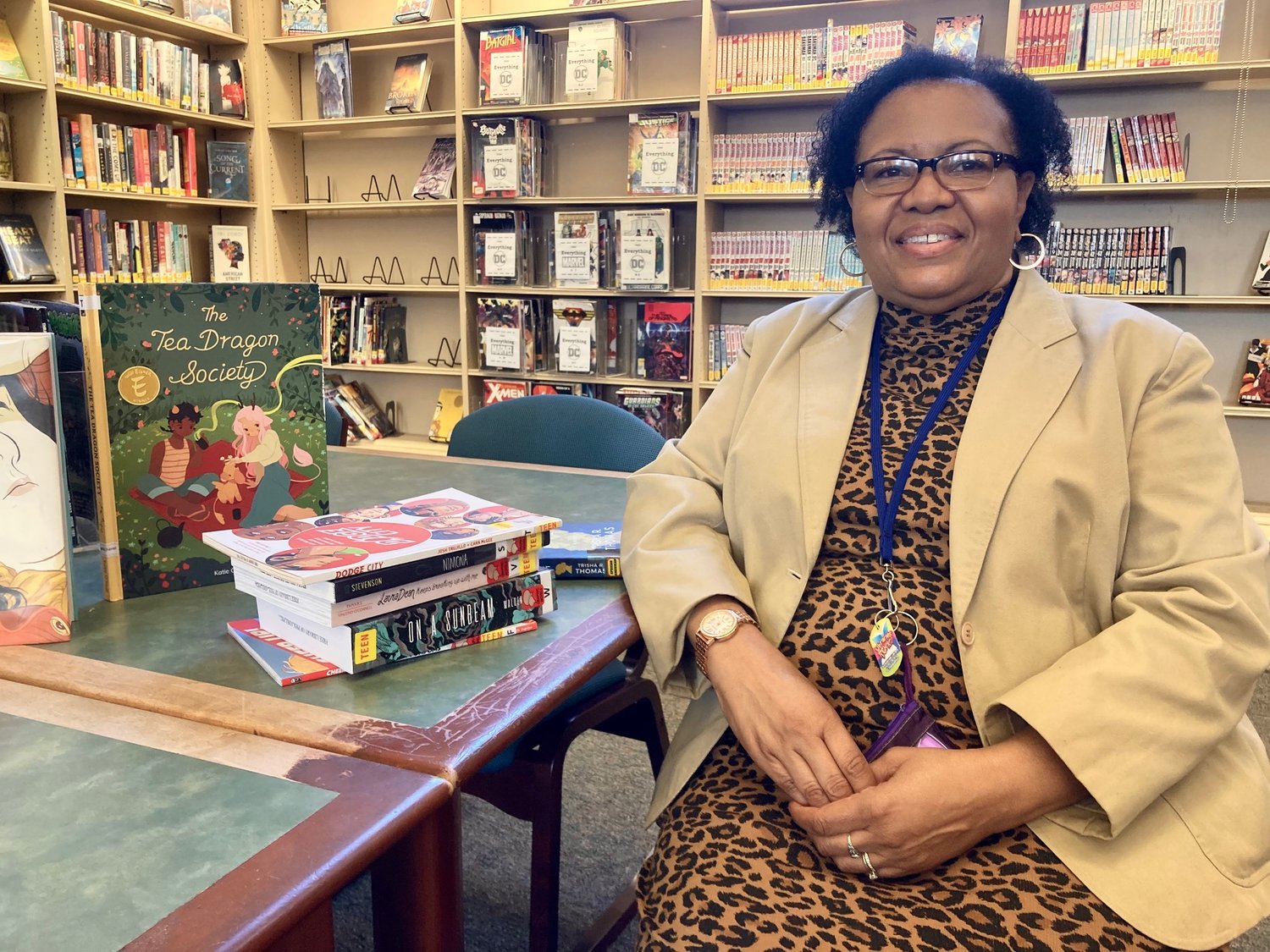 Mt. Airy resident Claire Hand is the new adult/teen librarian at the Chestnut Hill Library. Photo by Brian Rudnick
Posted Thursday, May 12, 2022 10:23 am
by Len Lear

My first question for Claire Hand, Chestnut Hill's new librarian, was: “Why do we still need libraries now that almost every kid has a virtual Google library in their pocket?”

Hand's reply: “We have healthy digital resources also, and we have materials specific to what students need. We provide credible sources, as do other academic and public libraries.

“On the other hand, Google puts stuff on whether it is credible or not,” Hand continued. “Students know you cannot reply entirely on Google. It is great for ideas, but you really have to do your own research, and that is where a real library still comes in.”

Hand, who grew up on Emlen Street in Mt. Airy, had many stops along the academic and vocational road before coming to a stop at library and information science. She was a “lifer” at Cecilian Academy, a small, private Catholic K-12 school on Carpenter Lane in Mt. Airy that closed its doors in 2000. “Most classes were just six to eight students,” Hand said.

After high school, Hand spent four years in the U.S. Air Force, where she learned drafting and land surveying and earned a certification in site development. “I only knew of two other women in the Air Force in my career field,” she said, “but women have been exploring new careers.”

Then she got a job as a draftsperson in New York for two years, and followed that working for Rollins Cablevision of Philadelphia before being promoted to field engineering supervisor. Hand was there when Heritage Cablevision took over Rollins, and then in 1988, when Comcast then took over the company, Hand went to work for the city of Philadelphia as a library assistant. She was later promoted through the Streets Department as an engineering assistant and traffic investigator.

Then she thought about changing careers.

“I had always been drawn to languages,” said Hand, who moved to Oahu, Hawaii, with her husband, P.W. Hand, who pursued a degree in Asian studies there.

While in Hawaii, Hand worked at the Hawaii Medical Library for a couple years and enrolled in a community college that was part of the University of Hawaii System. (While in high school, Hand had been a “candy striper” at the Medical College of Pennsylvania in East Falls, volunteered in the school’s library and considered pursuing a career in library science.)

The Hands moved from Hawaii to Nevada because P.W. wanted to study with a particular Chinese language professor at the University of Nevada, Las Vegas (UNLV). While in Las Vegas (“No; I am not a gambler,” she said), Hand worked at the law library on the UNLV campus as a library assistant, managing the law school's interlibrary loans.

She finished her bachelor's degree in linguistic studies, focusing on English grammar with a minor in French, and proceeded to earn a master’s degree in educational leadership, followed by a master’s in library and information sciences from San Jose State University, which has the largest online programs for library sciences in the U.S.

From Las Vegas, the Hands moved back to Philadelphia, where Hand became a librarian at the Wynnefield Library for four years before transferring recently to the Chestnut Hill Library, where Prather Egan is the branch manager and children's librarian. The Hands live in Mt. Airy.

“I am so glad to be back in Mt. Airy,” Hand said last week. “I am partial to Mt. Airy  and Chestnut Hill. As a kid, my parents took me to [The Hill] movie theater. I picked up cookies from Bredenbeck's way back then. I miss the Depot, too. I loved it.” (The Depot, located where Starbucks is now in Chestnut Hill, was a restaurant and bar with a railroad theme. The Depot's owner, Richard Allman, now owns the Joseph Ambler Inn in North Wales.)

The Chestnut Hill Library is open full-time again for in-person use. One very popular program is the math and sciences enrichment and tutoring program. St. Joseph's University students tutor teens and pre-teens who need help with homework. This semester, the program ran from Feb. 24 to May 2, but it will start up again in the fall.

Hand's husband is a prolific author, mostly of espionage and detective books. He has written three novels — “Invisible: À Perte de Vue” about a master spy with the CIA who recruits young spies; “House of the Flying Snakes: Operation Algorithm” and the futuristic “United New Africa.” Hand edited of all three.

For more information, call 215-685-9290 or visit chlibrary.friends.org. Len Lear can be reached at lenlear@chestnuthilllocal.com