This week, I was headed through Flourtown to go to Starbucks when I almost had a car wreck on Bethlehem Pike. There it was: SWEETZELS emblazoned big and bold on the glass outside 1501 Bethlehem Pike. 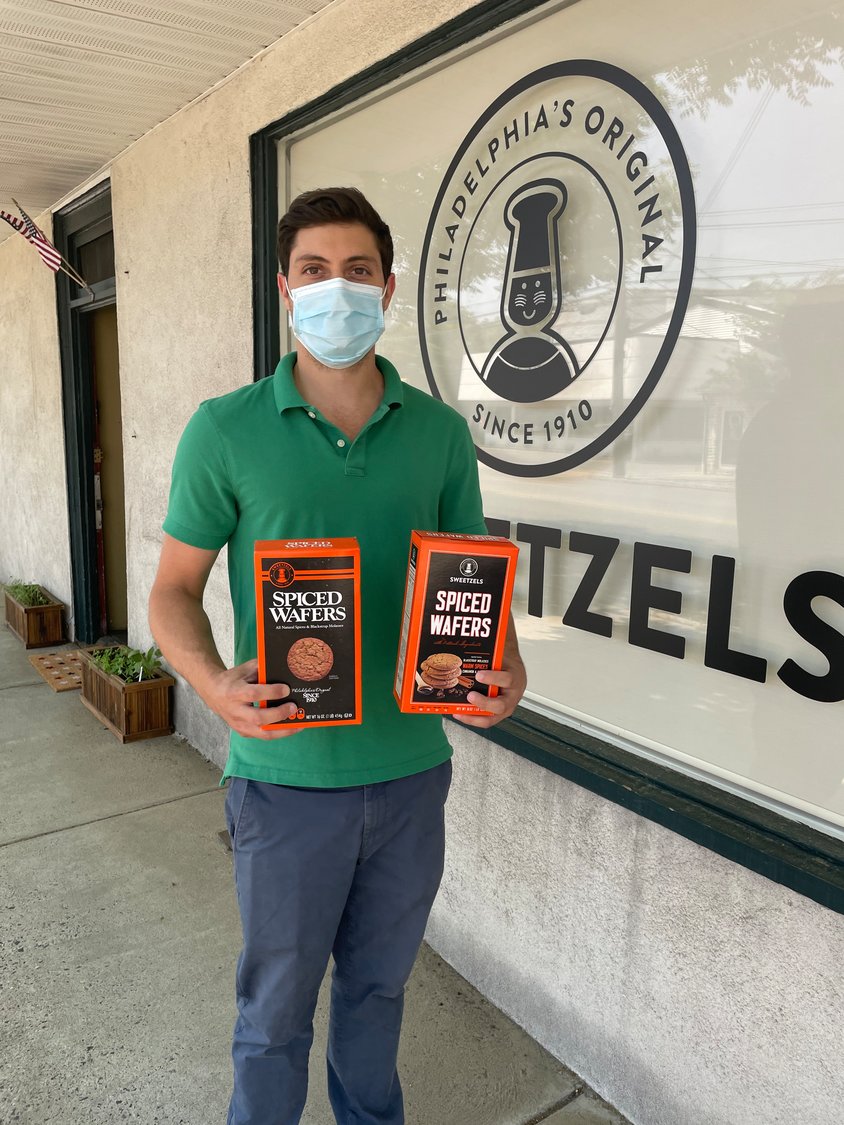 This week, I was headed through Flourtown to go to Starbucks when I almost had a car wreck on Bethlehem Pike. There it was: SWEETZELS emblazoned big and bold on the glass outside 1501 Bethlehem Pike.

The Spiced Wafers. The original pumpkin spice wrapped in a cookie. My brain was churning. I knew Sweetzels had an office above Barbara B’s Jewels so what was this? A retail operation? A wholesale wonderland?

My neighbors saw the same window this week. Time to get some answers.

Well, after much investigation -- and a sit-down chat with Sweetzels third generation owner Rob Borzillo -- it turns out that, alas, Sweetzels, makers of our beloved Philly Spiced Wafers, moved offices and much to my dismay, is not selling boxes out of the storefront. The company established at the turn of the century here in Philly is instead undergoing some big-time rebranding, with plans to expand its sales for the first time ever from here all the way to North Carolina by the time fall arrives.

Much like St Patty’s Day wouldn’t be the same in Philly without Irish Potatoes, or Easter baskets complete without ButterKrak Eggs, Sweetzels is a part of Philly’s food history.

No worries. The taste will be the same. But the wafers, known for their hard, sweet and spicy taste, will now come in a box that touts blackstrap molasses, “warm spices” and cinnamon and cloves as some of the secret spice mix ingredients.

On the back of the Sweetzels Spiced Wafer box, the black and orange duplicate of the cover we all know will be replaced with a friendly fall tutorial, featuring ways to enjoy them, from s’mores to coffee dunks to the ultimate pie crusts. While the company also makes ginger snaps, those only include ginger, not the secret spice mix found in the wafers.

“Everybody grew up here with spiced wafers. It is nostalgic and comforting,” Borzillo said. “But while people all around the world know what ginger snaps are, we want to grow our presence and share our tradition of spiced wafers.”

Sweetzels’ popular cousin, the Lemon Snap, which rolls into local stores for its seasonal visit at the end of this month, is also getting a facelift, with a new box that replaces a photo of one snap with a stylish food photo shoot featuring lemon zest and fresh lemon slices. Those same snaps are also featured this summer in a small batch beer from the Conshohocken Brewing Company called Ivin’s Famous Lemon Shandy. (Sweetzels also makes spiced wafer cookies sold in Acme under the Ivin’s brand, though the recipe for those spiced wafers is different.)

By August, the new boxes will be everywhere from Giant to Redner’s and specialty locations, including debuts in Washington D.C., Virginia and North Carolina. While they are typically available in Eastern Pennsylvania and South Jersey,  Borzillo wants more Americans to experience the joy.

“They were the original pumpkin spice flavor,” Borzillo said. “Now, pumpkin spice is everywhere, but people who grew up here know the flavor.”

This past year was a good year for the cookies, perhaps not despite the pandemic, but because of the pandemic. Borzillo admits their comfort food vibe made for brisk sales by the time fall rolled around.

The wafers have been such a part of life in Philly for more than 100 years. They were first made in Lansdale under the brand Perfect Foods. But by the turn of the century, Borzillo’s Italian family made Sweetzels its own. The Borzillos, who immigrated from Italy and ran bread bakery on Main Street in Norristown, decided to buy the Sweetzels brand and go full-time with cookie making right here in Philadelphia. The tradition went on for decades until, as a young reporter in Philly in the 1990s, I recall the city’s collective sorrow when the Sweetzels factory burned to the ground. The company now contracts out bakers to make the cookies each year to continue the tradition.

And in the near future, there may even be some new Sweetzels flavors, if Borzillo has anything to do with it.

Until then, we’ll be just fine with our Lemon Snaps and Spiced Wafers, thank you very much.