Four recent books about the strange bond between animals and humans

I recently read four books you might enjoy. All of them concern the mystifying intersections where humans and animals all too often collide.

Four recent books about the strange bond between animals and humans 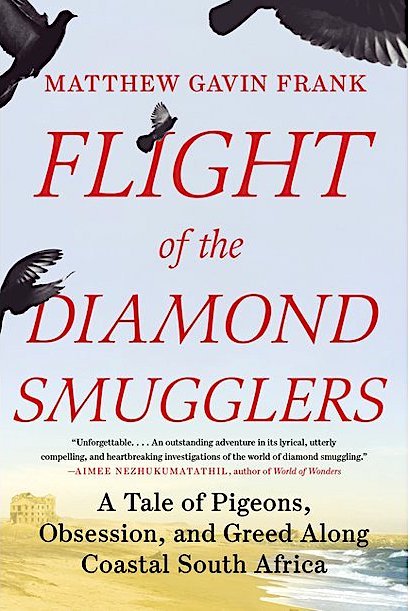 I recently read four books you might enjoy. All of them concern the mystifying intersections where humans and animals all too often collide.

He soon meets a few mine workers, many of them mere children. They work for pennies a day. Their lungs are corrupted by diamond dust by the time they are teens. The only way to balance the unjust economic scales, they have discovered, is to smuggle diamonds out of the huge pits that pock the landscape. They do this by tying tiny bags carrying diamonds to homing pigeons they smuggle in to work and then let loose when it seems safe to do so.

Frank is driven to learn how this practice evolved, the rewards when it succeeds, the mining company’s efforts to thwart it, and how life in such an unjust, unfairly-weighted world affects both black, white and "coloured" (multiracial) lives in this region of the earth. Imbuing the entire narrative with further mystery, we learn about the beauty and uncanny sensitivities of carrier pigeons.

Her story is not so much a physical adventure story of life in the wilderness, but an attempt to understand the wildness of the cosmos - while questioning whether there are division lines between life forms. According to the myths, legends and beliefs of the people Martin studied, the "transaction” on the trail that day caused an exchange between her and the bear, during which each had subsumed part of the other's nature. Thus, it is an adventure of the mind, not just the body, and quite a philosophical book.

Hugh Gilmore is a former biological anthropologist who studied nonhuman primates in the West Indies and East Africa. He quotes here the old scientific adage: "Life is not only stranger than we imagine, it is stranger than we can imagine."