While this news is an unwelcome shock to a long list of loyal customers, it isn’t to Phil Taylor and Madeline Rambo-Colisto, the shop’s mechanic and office manager. 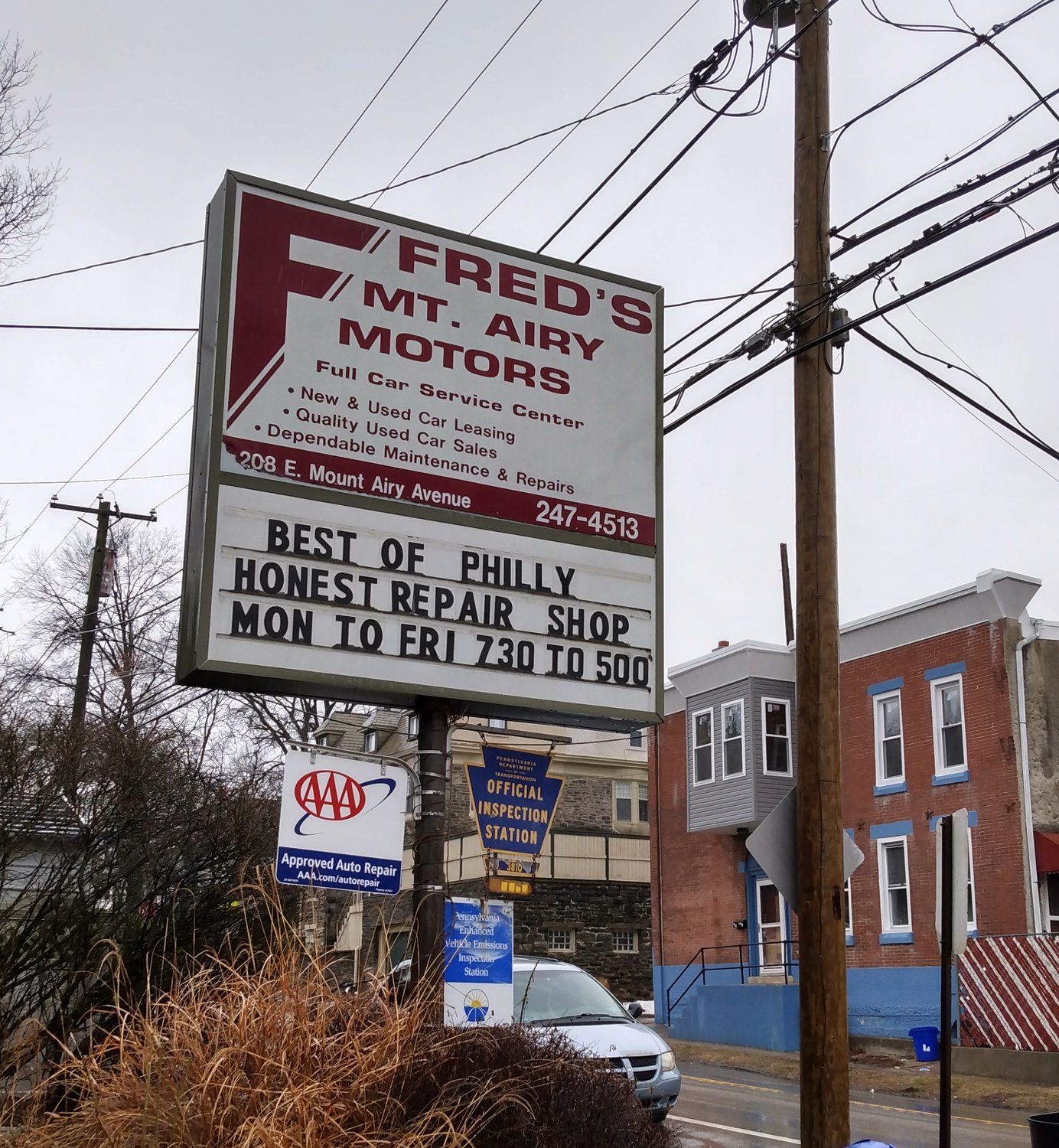 A neighborhood fixture with a loyal customer base, Fred’s Motors at 208 E Mt. Airy Ave. will soon be moving.
Posted Friday, February 11, 2022 6:00 am
by Stacia Friedman

For more than sixty years, residents in Northwest Philadelphia have depended on Fred’s Mt. Airy Motors to keep their cars running like new, whether they are driving a vintage jalopy or a luxury hybrid.

But this neighborhood treasure is closing on March 30, 2022, because the owner, David Fellner, is selling the property. Townhouses are being planned in its place.

And while this news is an unwelcome shock to a long list of loyal customers, it isn’t to Phil Taylor and Madeline Rambo-Colisto, the shop’s mechanic and office manager.

“We have a lot of memories here, but we understand why he’s selling the place. It is what is best for his family,” said Taylor, who is fondly called Phil by nearly all the shop’s customers. “We are going to embrace the next chapter of our lives.”

The good news is that Taylor and Rambo-Colisto are not retiring. Starting April 4, they can be found a mile up the road at Combine Tire & Auto Repair (previously Blatt Tire), 1000 S. Easton Road in the Cedarbrook Plaza behind WalMart.

“We have been dealing with Combine Tire & Auto Repair for decades and have referred customers to them when we were overbooked,” Taylor explained. “Madeline and I always knew we would go there when and if Fred’s closed. Our intention was, if we ever had to leave, we would leave as a pair. You won’t get one without the other.”

Anyone who has spent five minutes with this duo knows that Taylor and Rambo-Colisto are a team, as in sync as Fred Astaire and Ginger Rogers. They finish each other’s sentences. And it’s not just the business that is a neighborhood fixture, it is Taylor and Rambo-Colisto themselves. “I can’t go to the Acme without people stopping me to say hello,” Taylor said.

While they are enthusiastic about their upcoming move, both admit it will involve some adjustments.

“I started working here when I was twenty-three and have lived a half block away from Fred’s all my life. Now, after all this time, I will have to drive to work,” Rambo-Colisto said in disbelief. Phil, who also lives in Mt. Airy and walks to work, is taking the change in stride.

According to Fellner, whose father Werner founded the business, the upcoming move is one of many for the business since it was first launched in 1956. Werner Fellner was born in Germany. Werner, his parents and three brothers escaped the Nazi persecution of Jews in 1939. Two other brothers who were unable to leave the country died in the Holocaust.

Born in Germany, Mr. Fellner, his parents and three brothers escaped in 1939 during the Nazi persecution of Jews. Two other brothers, unable to leave, died in the Holocaust.

After living in England, Werner Fellner joined the British Army and served in World War II as a mechanic. That training led to work at car dealerships after he immigrated to Philadelphia with his wife Gabi. It was here that Werner’s fellow auto workers gave him his American name – Fred.

“My Dad first launched his business, Fred’s Foreign Car Service, at the corner of Germantown and Springfield Avenues in 1956, the location now occupied by CinCin,” Fellner said.

“In the 1960s, he moved the business to Moreland Avenue and later to the current location on Mt. Airy Avenue,” Fellner said. “At that time, Fred’s Motors was a Citron car dealership and, in the 1990s, it was one of the top Peugeot dealerships in the nation. In 2005, it became a neighborhood service center for all makes of cars.”

Fellner joined his father’s business in the 1970s as a car salesman.  “Back then, we had a customer who taught at Dobbins Vocational School. My father asked to have a Dobbins student as an intern. That is how Phil came to work for us while he was still in high school,” he said.

“Phil is a highly-skilled car mechanic. He was always taking night classes to increase his knowledge. There’s not very much on a car that he can’t fix,” Fellner said. Case in point: Phil never stopped upgrading his skills. He has recently taken courses in servicing electric and hybrid cars.

“Fred was like a father to me,”Taylor said. “When he retired and moved to Cathedral Village, he invited Madeline and me and our families for dinner every month, as well as on our birthdays. When he passed away in 2011, I gave a eulogy at his funeral,”

According to his son, Fred was reluctant to stop working but slowly withdrew from the business. “By that time, Phil and Madeline were running the show. I think of it as an independent business. I am just their landlord,” Fellner said.

Why sell now? “It’s time,” said Fellner, who also owns the Sedgwick Theater and other properties along Germantown Avenue. When asked what will take the place of Fred’s Mt. Airy Motors, Fellner said, “Townhouses.”

Meanwhile, Taylor and Rambo-Colisto are handing out flyers to customers that say, “It’s been a great run, but we are starting a new journey.”

So it’s not a final goodbye. It’s an invitation to follow them to their new location, where the quality of service that won them a Best of Philly Award will continue to be available.