For 12 years, Allen "Zak" Zaklad, 80, has been leading free tai chi workouts several days a week for anyone who shows up at Ned Wolf Park in West Mt. Airy. 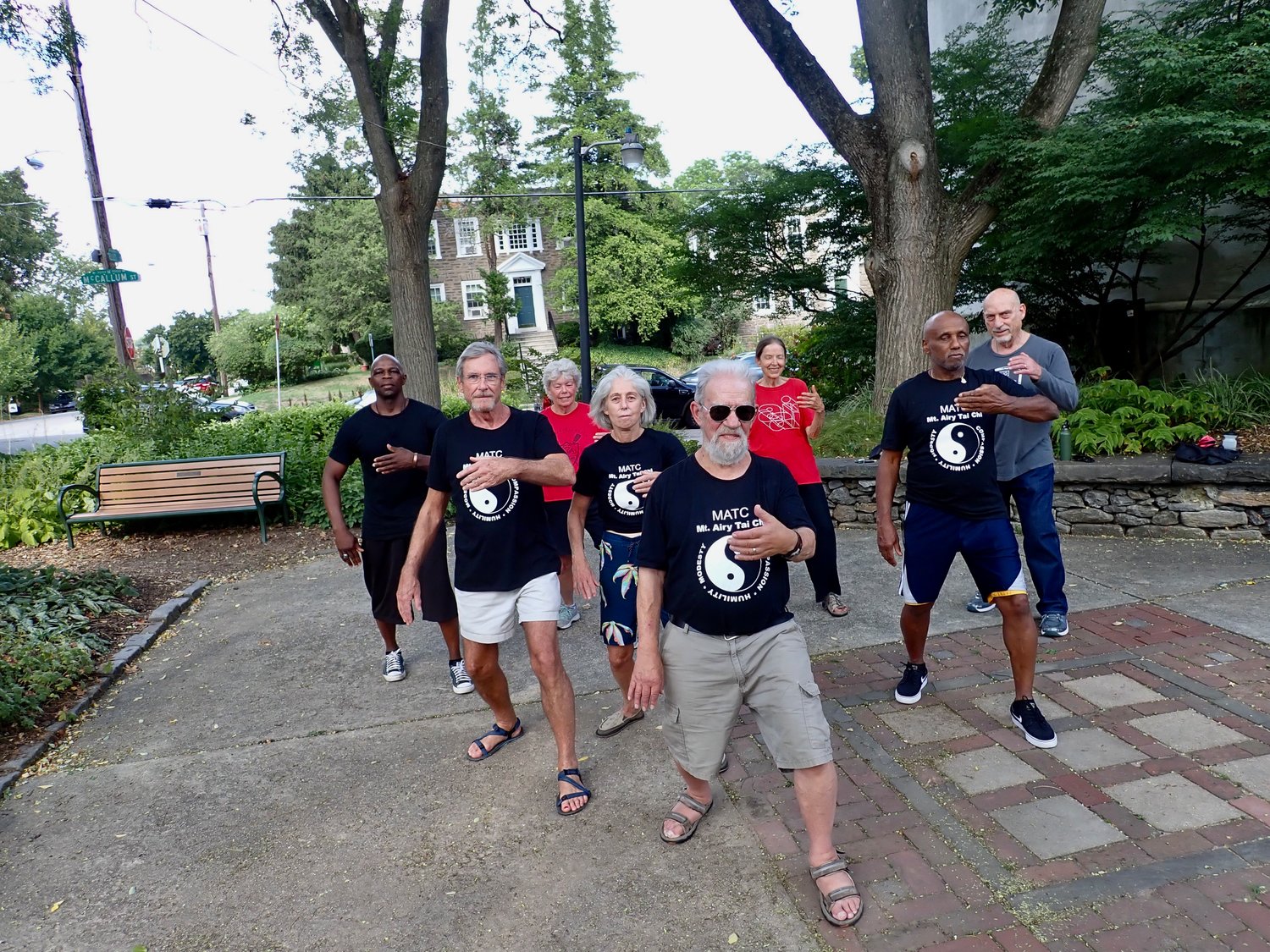 Allen “Zak” Zaklad, 80, a longtime Mt. Airy resident and psychotherapist who’s earned his doctorate, reminds me of a message I saw on a T-shirt recently: “Stop telling me to act my age; I've never been this old before.”

With his daily tai chi workouts, generosity and bubbly enthusiasm, Zak comes across to everyone as a much younger man. For 12 years, Zak has been leading free tai chi workouts several days a week for anyone who shows up at Ned Wolf Park at the corner of Ellet and McCallum Streets in West Mt. Airy, which has gained him a legion of fans. (Tai chi is an ancient Chinese martial arts practice characterized by slow body movements, which makes it particularly appealing to senior citizens.)

For example, James Chan of Center City, who has been a student of Zak’s tai chi classes for three years, told us, “Zak is unique as a tai chi teacher. I don’t know of anyone who is like him. It is not just that he offers to teach tai chi for free. He is always available. He is steadfast, patient, encouraging and supportive ... with his welcoming personality ... He is a rare find among tai chi teachers.”

According to Donald Thomas, of South Philadelphia, “Twenty-one years ago, I was in a terrible car accident; my brother died instantly in the accident. I was in a coma for about a month, had many operations and was diagnosed with a traumatic brain injury. Doctors told my family I would be dead within a few days.

“I was introduced to Zak in a support group. As time went by, he started a tai chi group. Because of my accident, I felt like a damaged individual, but Zak took time with me. Tai chi showed me that I can relax and breathe by staying focused and doing slow movements. I no longer feel like a damaged individual. Now I feel like a person who is slowly feeling confident in my decisions and my life!”

In 2007, Zak, who had been practicing martial arts for decades, was suffering from severe arthritis in both hips. “It was extremely painful,” he said. “I could not do martial arts anymore.”

Later that year, Zak had both of his hips replaced at Rothman Institute. “It was a miracle,” he said.”After a few weeks I could do martial arts without any pain. I felt like I had been given a fabulous gift, and I needed to do something to give back.”

That's when he started teaching free tai chi classes, at first to clients with HIV and AIDS. He said these clients suffer from chronic pain caused by arthritis and peripheral neuropathy, and he wanted to help relieve their pain in a way that did not involve taking more medication. One of his clients was in a wheelchair because of a stroke. “Half of his body didn't work,” Zak said. “but he had a very strong mind, and he was committed to getting better.”

After a year of studying tai chi with Zak, the man was able to get out of his wheelchair. “I was blown away,” Zak said. “It wasn't just the tai chi that helped him get out of the wheelchair, but he said it was definitely a combination of the physical therapy and tai chi. I was very humbled considering I am not a tai chi Master.”

After that, Zak decided to offer free tai chi classes to his clients and all Northwest Philly residents. Word of mouth spread, and today he gets clients from other parts of the Delaware Valley as well as residents of other states who take the classes via Zoom.

A native of Brooklyn, Zak came to Philadelphia in the mid-1960s to attend graduate school at the University of Pennsylvania, where he earned a doctorate degree in psychology in 1974. Twenty years ago, he married Ellen Benson, an artist and former bank executive, and they moved into her Mt. Airy house, where they remain. “We love the diversity of people in Mt. Airy,” he said.

Zak still sees patients two days a week, mostly low-income women. “I love the work and am not the least bit burned out,” said the octogenarian. “I share with my therapy clients what I have learned from tai chi, such as breathing properly and managing blood pressure.”

Zak and acolytes he has trained conduct tai chi sessions four times a week at Ned Wolf Park— Monday, Wednesday and Friday at 4 p.m., and Sunday at 8 a.m.; two times a week on Zoom and once at Wissahickon High School in Lower Gwynedd Township. All are free, and there are no applications to complete. People just show up. On average, about 12 to 15 people come to each session. Most participants come twice a week.

Sue Ann Rybak contributed to this article. For more information, email azaklad.craftech.com. Len Lear can be reached at lenlear@chestnuthilllocal.com.