Paul Mercurio, who now lives across the road from Chestnut Hill College, was a typical working class kid growing up in West Oak Lane. Now he's a published author. 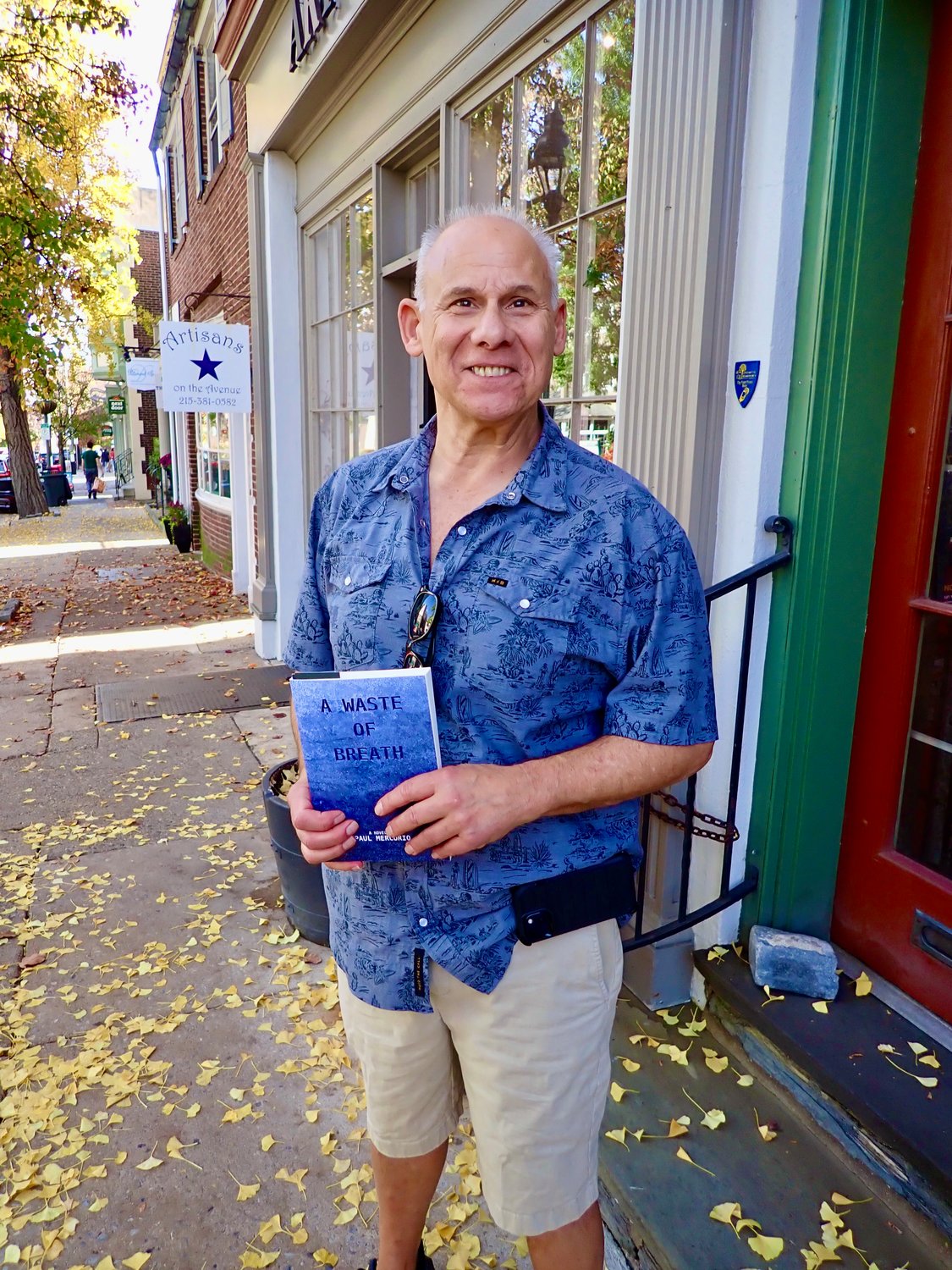 Hill resident Paul Mercurio, who grew up in a West Oak Lane rowhouse, is the author of the just-released “A Waste of Breath,” a page-turning thriller with characters loosely based on real Philly people.
Photo by Len Lear
Posted Thursday, November 24, 2022 12:00 am
by Len Lear

Paul Mercurio, who now lives across the road from Chestnut Hill College, was a typical working class kid growing up in a rowhouse in West Oak Lane's St. Athanasius parish and playing ball at Simons Recreation Center. “I loved growing up there,” said Mercurio, who went to Cardinal Dougherty High School and then Temple University but dropped out four credits short of graduation because he had a new baby and “did not want to be a deadbeat dad.”

So he got a job at Merck Pharmaceutical Company in 1976 as a janitor and was not exactly setting the world on fire. In fact, he was laid off three times in the following six and a half years. But Mercurio went back to Temple in 1979 and finally earned a degree in journalism while living in Olney. He barely had two coins to rub together.

“I was so broke that they shut off my gas, and I had no phone,” he said, “and my ex-wife was pushing for child support, which I did not have.”

While at Temple, however, Paul decided to take a course in  creative writing, which was taught by novelist David Bradley, winner of the 1982 PEN/Faulkner Award for Fiction for “The Chaneysville Incident.” By semester’s end, Paul had written the first draft of “Rockland,” a crime novel named for Rockland Street in the city's Olney and Logan neighborhoods.

“Although the manuscript proved raw and uneven, as most first drafts are,” Mercurio said, “David told me I had 'hit a home run,' and he tried to help me get published. That was heady stuff, coming from such a critically-acclaimed novelist. Unfortunately, after numerous drafts, stops, starts and rejection letters, 'Rockland' never saw the light of day. Life is what happens when you’re busy making plans. I finished the novel and put it away.”

“Rockland,” which was eventually published, is the compelling account of three days in the life of Frankie Breeze, ex-Marine, ex-biker, ex-husband and father. Like many of his contemporaries, Breeze has lost his way. He's marking time, depending on the day and mood, as a part-time college student and cab driver. One morning, he picks up a dangerous fare, a major cocaine dealer named Johnny Timbro, who wants to retire alive with a handsome pension, courtesy of 12 kilos stolen from his mentors.

Breeze takes on the job of keeping the drug dealer alive in return for half of the proceeds from the skimmed contraband. Of course, danger ensues. A movie-ready plot. All locations in the book are in Philly.

Meanwhile, Mercurio, who now has two ex-wives, three children and three grandchildren, went back to work at Merck in 1987 and wound up doing several jobs, including a driving a forklift for 24 years. His last job before retiring in April of 2021 was as an environmental technician. Among other responsibilities, he tested the air and water in areas where scientists make vaccines.

He also ran the newsletter and was the recording secretary for his union local, United Steelworkers Local 10-00086, although he was never a steelworker.

After his children were raised, Mercurio again decided to scratch his novelistic itch, and he worked for three years on the recently published “A Waste of Breath,” in which Frankie Breeze, years after a shootout that almost killed him, has become a sober, law-abiding, straight-up guy with a wife and children.

But if you remember “The Hurt Locker,” the Oscar-winning Best Picture in 2009, domestic life can be really boring for a veteran or criminal who is used to living every day with adrenaline-pumping danger.

So when the president of Breeze's union local is gunned down on a Center City street, Breeze, who lives in Roxborough, abandons domestic tranquility and returns to action mode, especially after a mob boss calls in a perceived debt and police come around asking questions about things he thought were dead and buried. It is a page-turning thriller with characters loosely based on real Philly people.

Mercurio will give half the profits of book sales to MC-LEF (Marine Corps Law Enforcement Foundation). They give 98 percent of their funds to scholarships for children of fallen vets, not just Marines, and police officers.

“A Waste of Breath” can be obtained at etsy.com/shop/PaulMercurioBooks. Len Lear can be reached at lenlear@chestnuthilllocal.com