Several girls' basketball teams in the area traveled to out-of-state tournaments last week. Germantown Academy had already done that before Christmas, so last week the Patriots only ventured as far as Cardinal O'Hara. 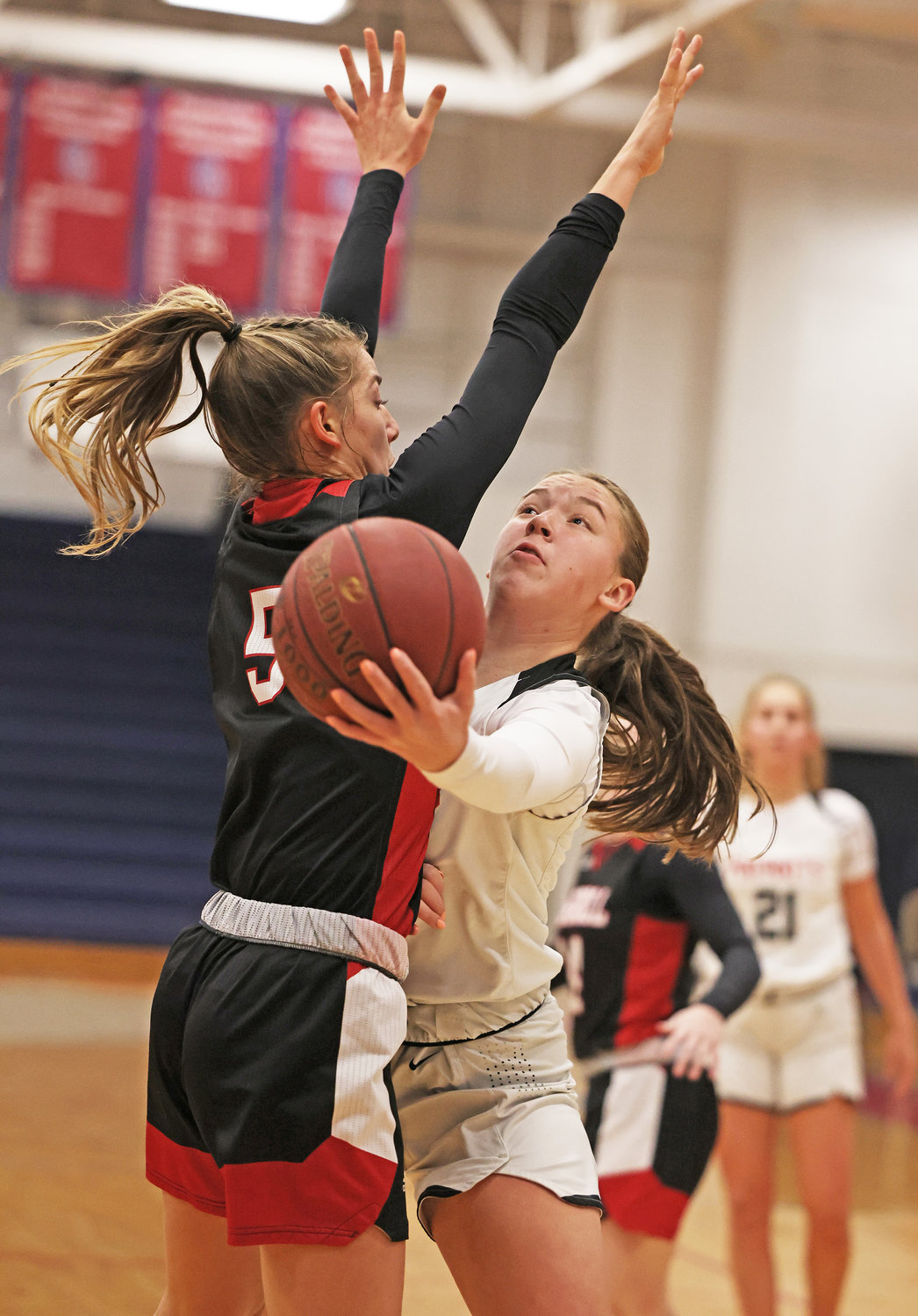 Gabby Bowes (right), a GA sophomore, reaches around Carroll's Brooke Wilson to get off a lay-up.
Photo by Tom Utescher 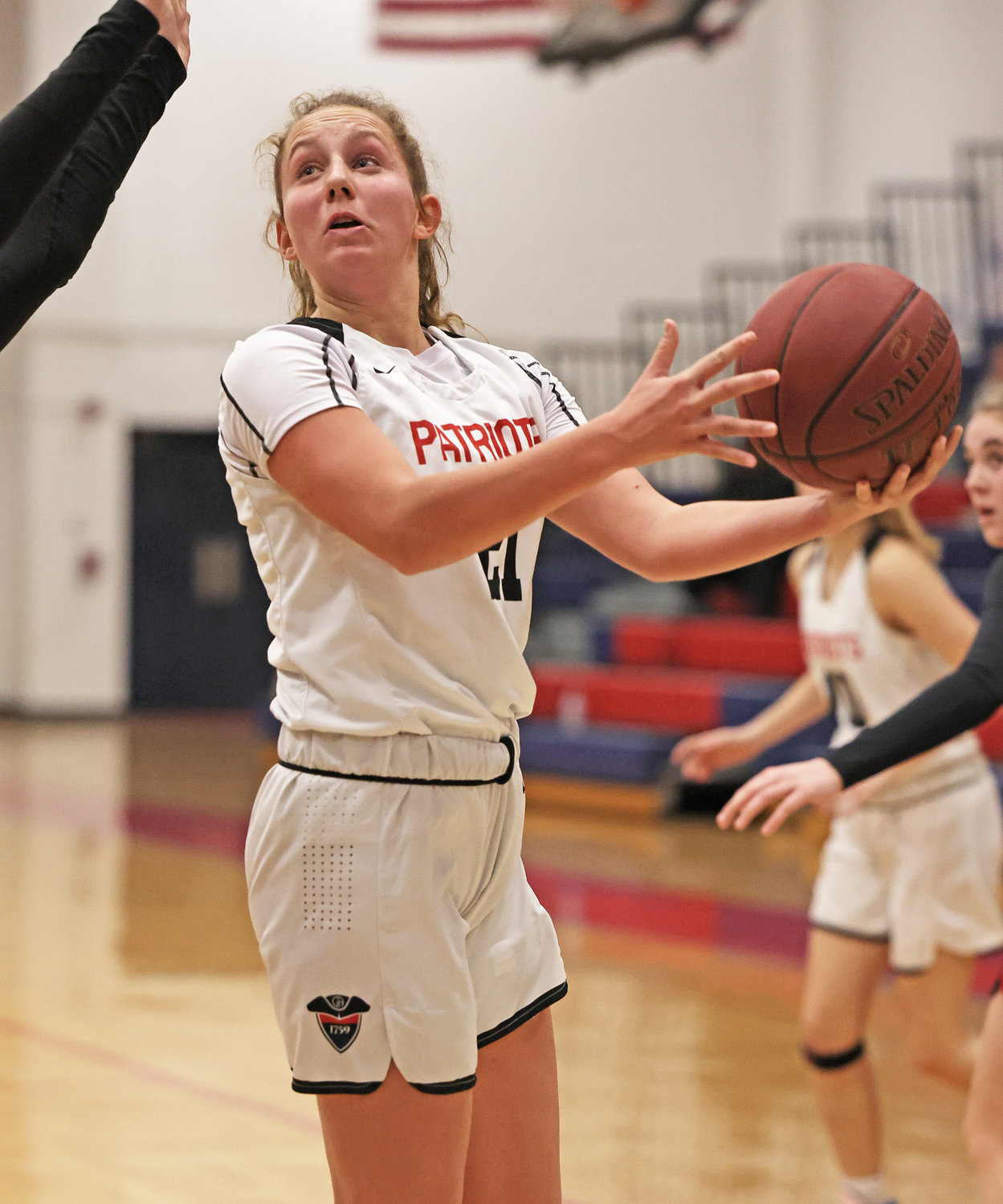 GA junior Izzy Casey rises up for a shot on her way to a game-high 22-point effort.
Photo by Tom Utescher 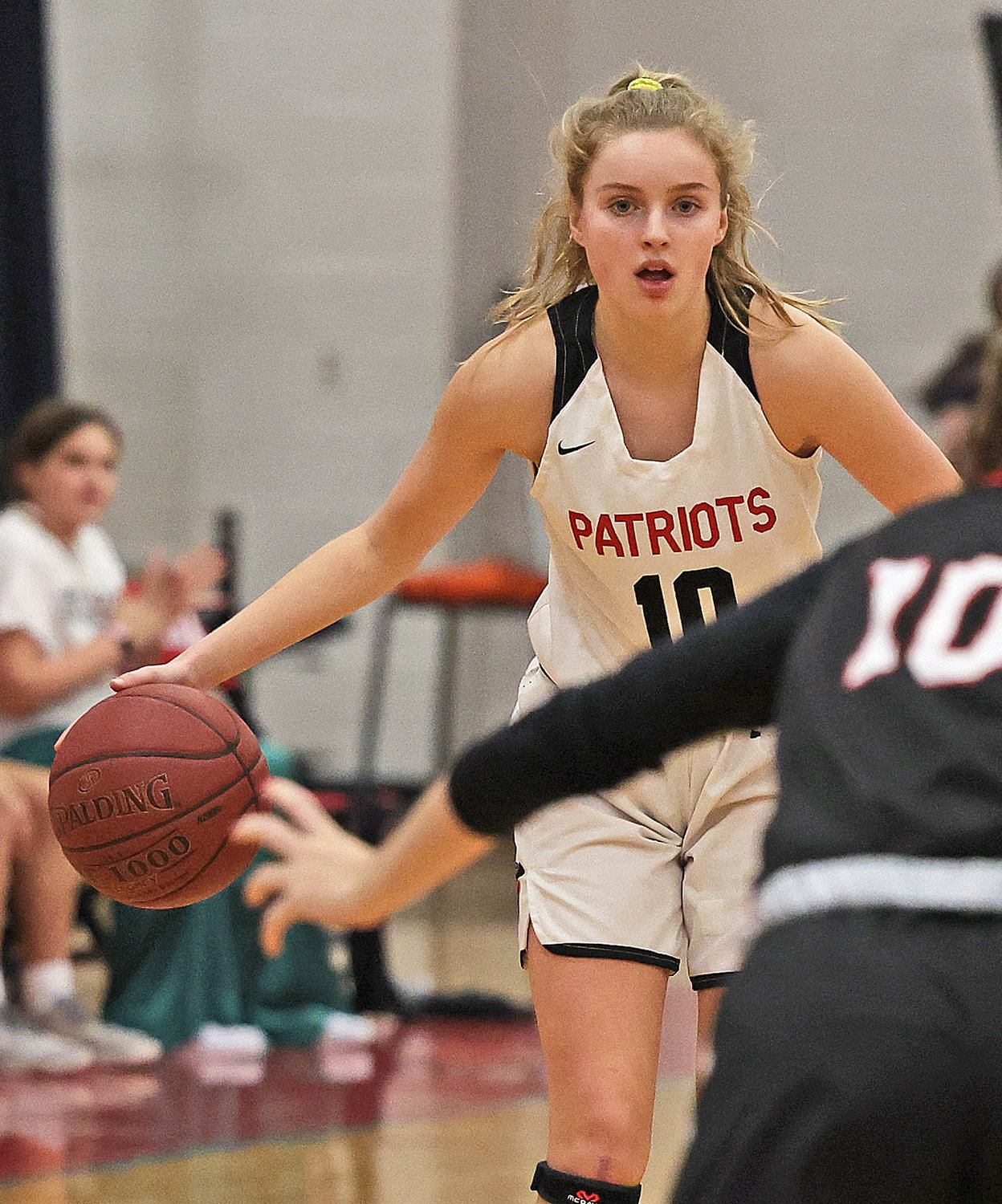 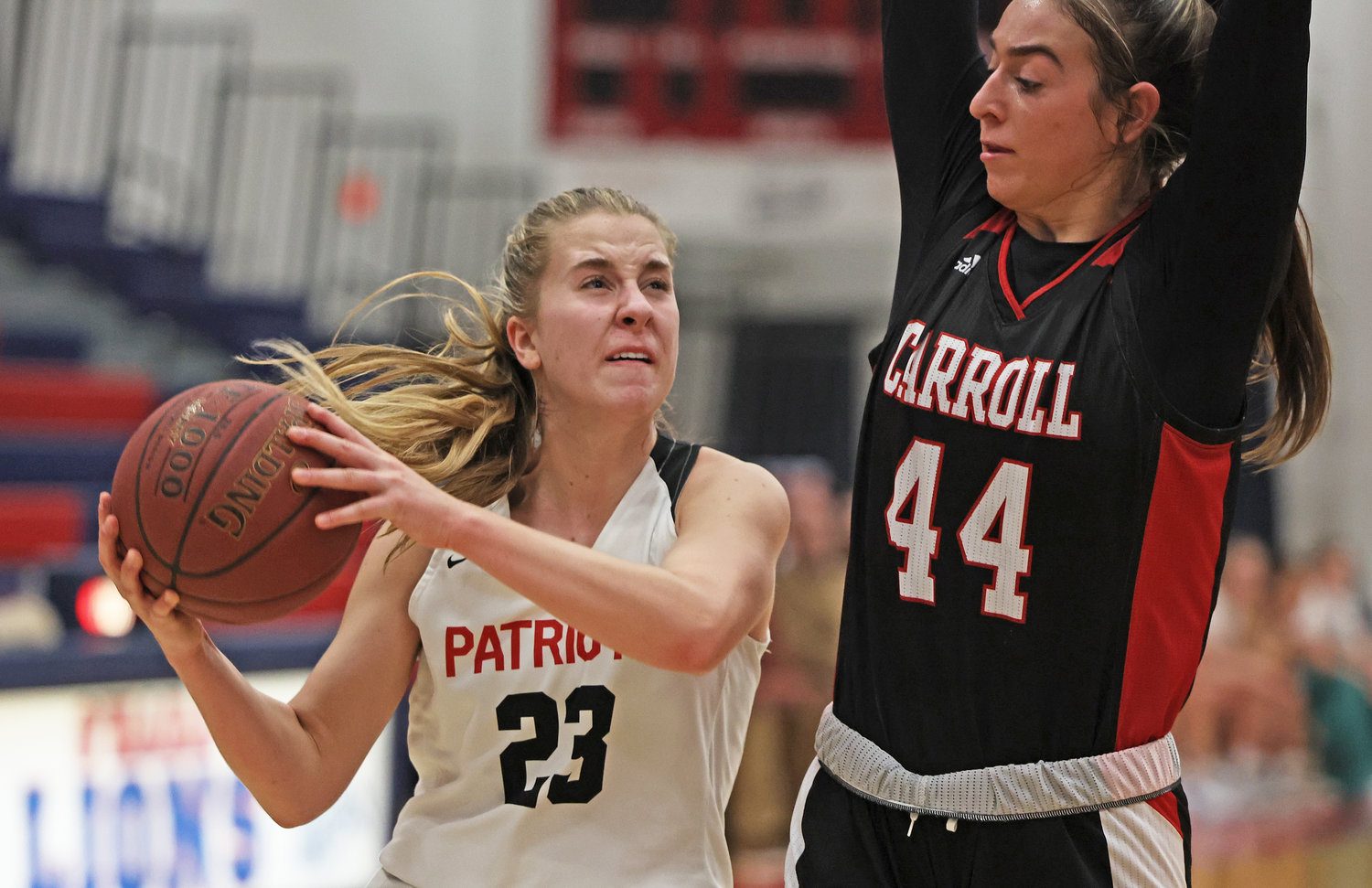 Sam Wade (left), a GA junior, tries to get off a shot against Taylor Wilson of Archbishop Carroll.
Photo by Tom Utescher
Previous Next
Posted Wednesday, January 4, 2023 12:00 am
by Tom Utescher

Several girls' basketball teams in the area traveled to out-of-state tournaments last week. Germantown Academy had already done that before Christmas, so last week the Patriots only ventured as far as Cardinal O'Hara High School in Delaware County, taking on Bayard Rustin High School and Archbishop Carroll in a prescheduled (rather than bracketed) tournament.

On Wednesday the Patriots lost to a powerful Rustin squad (6-2) by a score of 60-46, but on the following afternoon, in its final game of 2022, GA played a closer game against Carroll (1-4).

After leading at the end of the first quarter (9-7) and at halftime (16-15), Germantown fell behind in a 10-15 third period. In a seesaw fourth quarter, GA had the lead down to two points several times and Carroll (also nicknamed Patriots) was up by as many as seven. Carroll ultimately secured a 43-38 win for its first victory of the season.

GA had been missing starting guard/forward Jessica Aponik (a junior) for several weeks due to an ankle injury, and for last week's contests the Pats lacked another starter in 6'2" senior Kendall Bennett, who had come down with the flu.

A highlight for Germantown was the game-high 22-point performance by junior guard Izzy Casey, who helped keep GA's hopes alive until late in the game by shooting six-for-six from the free throw line in the fourth quarter (seven-for-seven for the afternoon). Next in scoring for GA was sophomore Gabby Bowes, who made two three-point field goals for six points.

Carroll was led by the Wilson sisters, Taylor, with 16 points, and Brooke, with 14. Alexis Eberz scored seven points for the winners.

In the opening quarter, Casey canned a "three" from the top of the key to get GA going, then lay-ups by Casey and sophomore CeeJay Thomas had  their team tied 7-7 with Carroll late in the period. Another bucket by Casey let GA finish with a 9-7 advantage.

Bowes hit one of her treys to begin the second quarter, and her sophomore classmate Jessica Kolecki put in two regular field goals later on. GA was fouling on the defensive end, though, with seven infractions in the first half. At the end of the second period, each of Carroll's Wilson sisters made a pair of free throws to get the Patriots from Radnor back within one point of their Fort Washington rivals, 16-15.

Carroll made what proved to be a decisive run at the start of the second half, as Taylor Wilson's three-pointer from the right corner touched off a 9-0 surge. Briefly, Archbishop Carroll owned the largest lead of the game, an eight-point margin at 24-16.

Midway through the period Germantown finally got on the board with Bowes' second trey of the day. Later on Carroll was up 30-23, then at the end of the third round Casey completed a traditional three-point play, closing up the score to 30-26.

GA junior Jenna Aponik (Jessica's twin sister) made a pair of foul shots early in the fourth quarter, and after Carroll's Brooke Wilson and GA's Casey traded lay-ups, it was again a two-point game, now 32-30. After a Carroll time-out, the Main Line squad gained a little separation as a drive by Brooke Wilson was followed by a three-point bucket by Eberz.

Over the next few minutes, GA couldn't make any headway as it simply traded points with the opposition.

The tally was 41-34 as the final minute began, but Casey made two free throws and then put in two more after Carroll came up empty on a one-and-one. It was now 41-38 with 20 seconds to go. Fouling to slow down the clock, Germantown committed what was deemed an intentional foul. Carroll missed both free throws, but kept possession of the ball with 16 seconds left.

Taylor Wilson drove for a basket to put the 43-38 final on the board. GA made one last trip down the floor, but missed a lay-up and saw Carroll corral the rebound.

Thomas, Aponik, and junior Sam Wade finished with two points apiece for Germantown, which came away with an overall record of 6-8.

In the new year, GA would be easing back into Inter-Ac League action with a home game against Springside Chestnut Hill Academy.