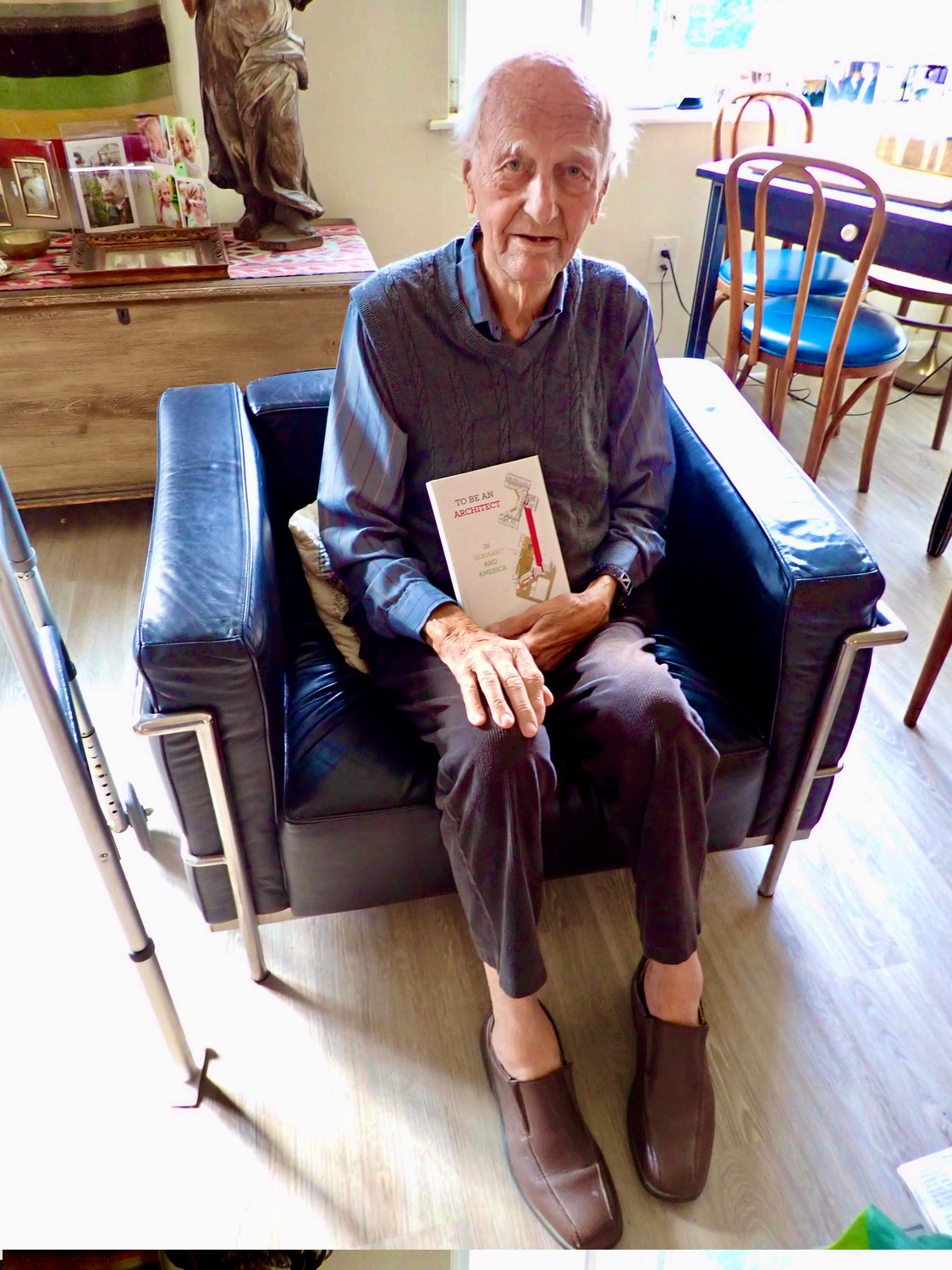 Otto Reichert-Facilides began writing his book almost 80 years ago while in combat with the German army in World War II.
Photo by Len Lear 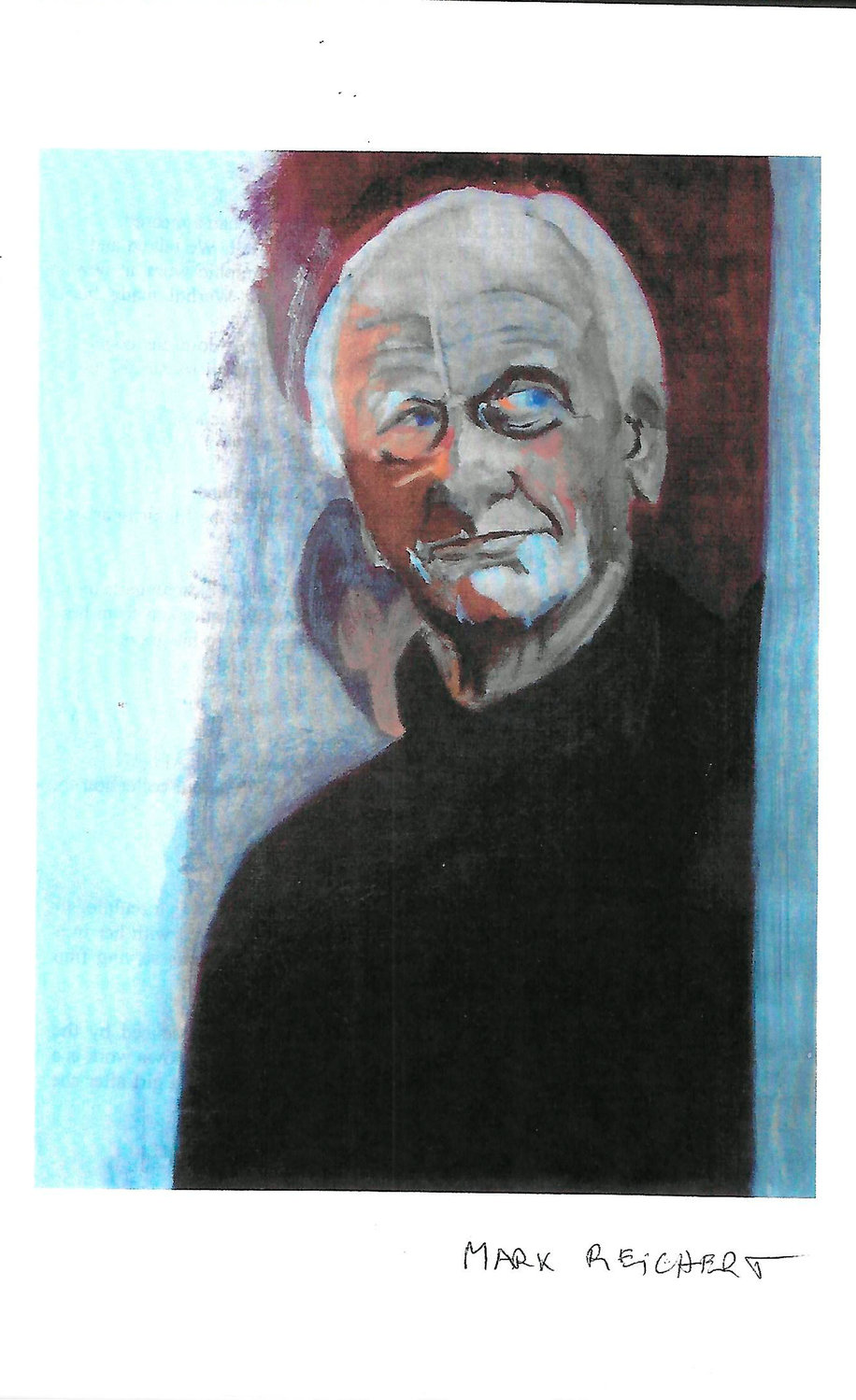 This is a painting of Otto, a new author at age 97. The portrait is by his son Mark, a resident of Roxborough.
Previous Next
Posted Thursday, August 18, 2022 12:00 am
by Len Lear

Reichert-Facilides, who is now 97 years old and living at the Hill House in Chestnut Hill, began taking notes in a foxhole in 1944 as an 18-year-old conscripted soldier in the German army fighting the Russian army on the eastern front during World War II.

For him, a young man steeped in a liberal German community, the rise of Hitler’s Nazi Party had come as a complete shock. The high school he attended was a liberal one, all the members of his extended family were liberal and he didn’t know anyone who had any connection to the Nazis.

“The principal wrote a letter to the Danish king that was critical of the Nazis, and he was never seen again,”  Reichert-Facilides said. “I was drafted into the army, and there was no choice but to go. If you objected, you would either be sent to a concentration camp or shot.”

He had a very pleasant youth until the Nazis took over, he said. And then came the war.

“A lot of my friends in the army were killed. I had three machine gun bullets go through me. It was a miracle that I survived. Bombs were constantly raining down, like in Ukraine today.”

Reichert-Facilides's new book, “To Be an Architect in Germany and America,” which he wrote on and off for decades and finally decided to finish during the pandemic, is a fascinating autobiography that begins with a spellbinding account of “living under Hitler.”

Reichert-Facilides's father, Walter, was a World War I hero who was killed by Ukrainian partisans in 1941. Their family home was destroyed by bombs, and his mother was almost killed in an air raid, but she crawled away from her burning house through openings in the basement. Gunther, a cousin, was killed. An uncle, Otto Ernst, was almost killed when his ship was bombed.

In his book, Reichert-Facilides wonders whether he deserved it.

“Was this the deserved punishment of a 17-year-old for being pulled into the whirlpool of Hitler's criminal war?” he writes, adding that “all Germans have to bear the responsibility of all deeds committed in the name of Germany. That includes Auschwitz.”

After the war, Reichert-Facilides earned a degree in architecture from a university in Germany and was then awarded a full Fulbright Scholarship to Columbia University, so he came to New York in 1950 to attend the city's Ivy League school.

When he got here, he said, it took some time to get used to being able to speak freely.

“My friends got into an argument, and I automatically looked over my shoulder to see if a CIA agent was listening,” he said. “Growing up in Nazi Germany, you internalize the fear. You were afraid to express an opinion because (a Nazi sympathizer) might overhear it, and then you might disappear.”

But New York in the 50s  - a city to which many German architects, scientists and intellectuals had fled - was very, very different.

“The freedom to express opinions in books and stage plays and conversations was so great when you did not have that before,” he said. “Americans who always had that freedom can't appreciate how special it is.”

After his years at Columbia University, Reichert-Facilides went back to Germany for six years and had a successful career there.

“But I felt like a bird in a cage,” he said. “My wife (Nury Vandellos Reichert-Facilides, whom he had married in 1955) and I both loved America, which opened itself up to us in a wonderful way.”

So the couple returned to the U.S, where Reichert-Facilides proceeded to earn a master's degree in architecture from Harvard University.

In 1968, 10 years after his arrival in Philadelphia, Reichert-Facilides was the sole architect hired over many other applicants to develop Academy House, a majestic 576-unit condominium complex at 1420 Locust St.

Reichert-Facilides then proceeded to do city planning for Wilkes-Barre, Norristown, Allentown and downtown Akron, Ohio, where he designed the city's fine arts center, which the New York Times called “the best design for an arts center in the U.S.” He was also influential in the development of the 3,400-acre Green Lane Park in northwestern Montgomery County, which draws many thousands of visitors every year.

Finally, in the early 1960s, Reichert-Facilides designed and built a house in Roxborough on land purchased from the Woodward family, who were responsible for the construction of so many Chestnut Hill homes in the last century. In that home, Otto and Nury raised their four children — Mark and Kent, who live in Roxborough; Christopher, who lives in Boston and Christina, who lives in Chestnut Hill.

For more information about “To Be an Architect in Germany and America,” visit abebooks.com. Len Lear can be reached at lenlear@chestnuthilllocal.com