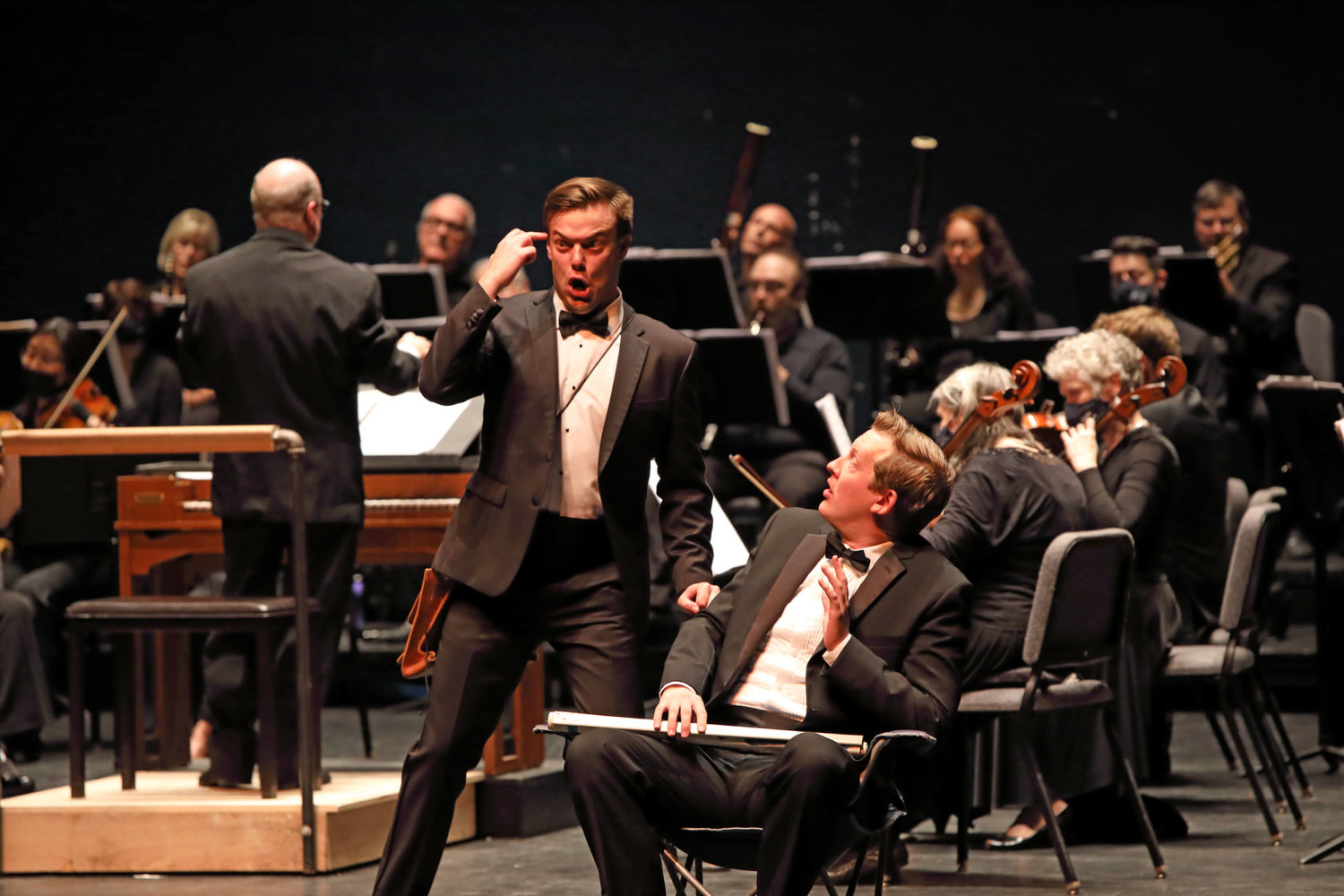 Eric Delagrange and Griffen Hogan Tracy perform scenes from “Barber of Seville” with Richard Raub on the podium. 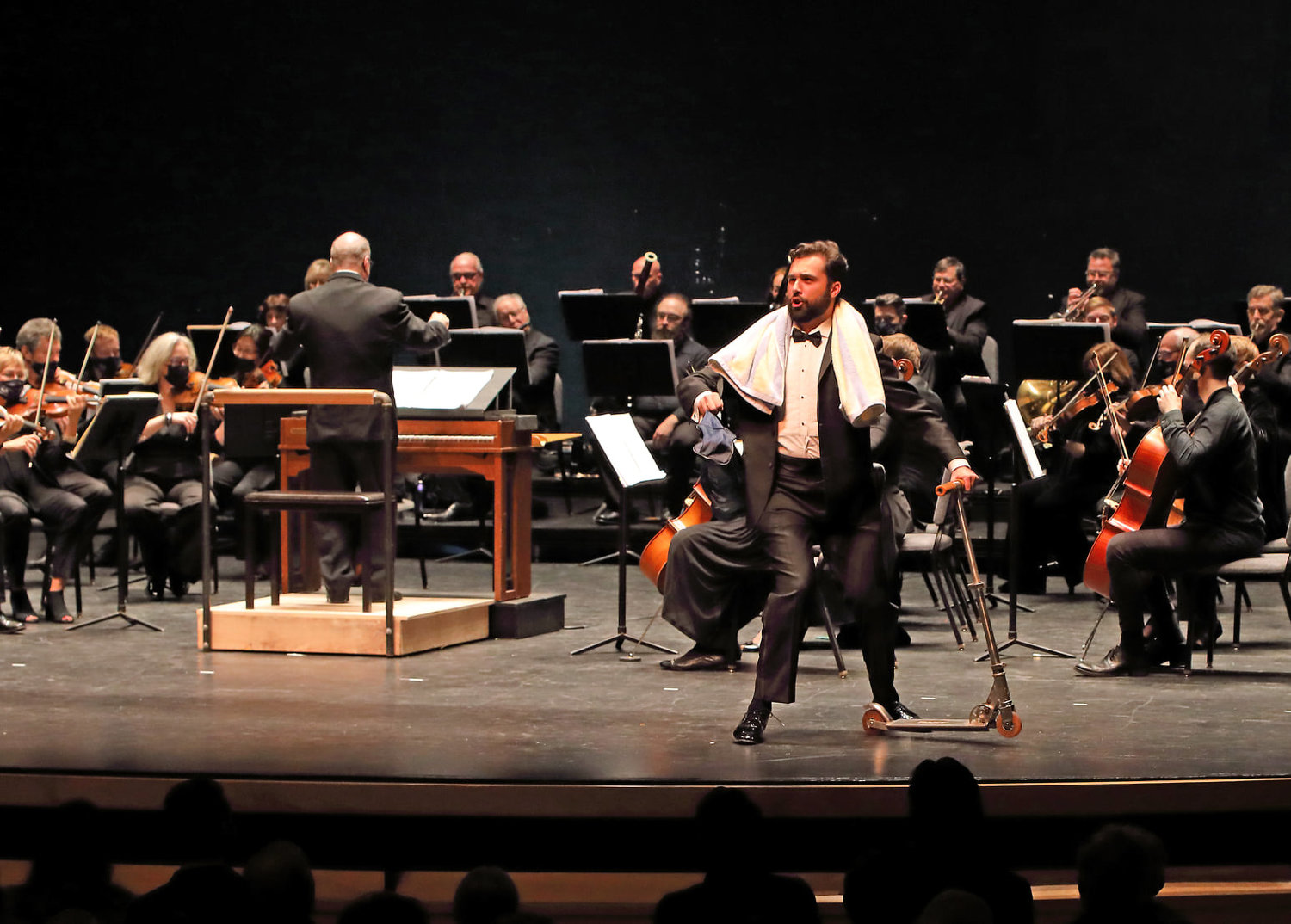 Longtime Germantown resident Richard Raub joined four other conductors to lead students from the Academy of Vocal Arts and the AVA orchestra in “A Celebration of Opera” Nov. 12-30. I caught opening night in Kimmel Center’s Perelman Theater, but four other performances were given in Center City, Lehigh University, Bucks County and the Main Line.

Raub’s soloists in the Rossini were baritone Titus Muzi in the title role of the Barber of Seville, tenor Shawn Roth as Count Almaviva, and bass Eric Delagrange as Don Basilio. Together with the players of the AVA Opera Orchestra, they caught the “Mad Hatter” insanity that has made this one of the most popular comic operas in the repertoire. All the same, both the vocal and instrument writing showcase Rossini at his most inspired. The “coloratura” pyrotechnical displays of the vocal writing dazzle the ear while the sizzling scoring does more to set the stage of the narrative than costumes or sets.

Raub elicited superb singing from his young vocalists and energetic yet supple playing from his instrumentalists.

The third act trio from “Mignon” was a tantalizing preview for AVA’s fully staged production of the opera set for Feb. 19-26, 2022. His soloists here were mezzo Monique Galvao in the title role, tenor Zachary Rioux as Wilhelm Meister, and bass-baritone Peter Barber as Lothario. All three sang with consummate sophistication and intense dramatic conviction, making the most of Raub’s impeccable instrumental support.

Macatsoris was at his “Italianate” best in the tragic third act of “Rigoletto,” drawing stirring performances from Kevin Godinez, Ethel Trujillo, Sahal Salam, Alice Chung and Cody Muller. It seemed as though the entire student body was onstage for the second act of “La Boheme,” yet Robert Kahn held the festive chaos completely under control.

Matthew Glandorf conducted Choral Arts Philadelphia and the Philadelphia Bach Collegium in performances of two oratorios by Giacomo Carissimi (1605-74): “The Universal Flood” and “The Dialogue of the Giant Goliath” Nov. 10 & 14. The first took place in the Episcopal Church of the Holy Trinity, Rittenhouse Square, Philadelphia; the second was given in the Episcopal Church of the Good Shepherd, Rosemont. The former featured the full Choral Arts choir whereas the latter was sung by only the 10 professional core soloists. I heard the second.

American music lovers often wrongly think that the “oratorio” was invented by its most glorious exponent, George Frederic Handel. But Italian musicians were composing oratorios even before Handel felt the financial need to write “Messiah.”

Although both of these scores by Carissimi pale before the majesty of “Messiah,” the “Goliath” opus is particularly impressive for its eloquent setting of its text and its highly dramatic vocal writing. Glandorf led his singers and players with a deep understanding of the period style and a moving commitment to each oratorio’s narrative.

Choral Arts will celebrate the end of 2021 with a performance of Bach’s “Christmas Oratorio” Friday, Dec. 31, at 4 p.m. in the Episcopal Cathedral of Philadelphia. Visit choralarts.com.

Mendelssohn Chorus of Philadelphia will return to Chestnut Hill for the first time in two years for its traditional “Feast of Carols” concert Saturday, Dec. 11, at 4 and 7:30 p.m. in St. Paul’s Episcopal Church, 22 E. Chestnut Hill Ave. The parish’s own music director, Andy Kotylo, will be the organist for the performance. He’ll be joined by Timberdale Brass for a roster of music that includes Pinkham’s “Christmas Cantata,” the world premiere of Texu Kim’s “The New Year’s Magpie Song,” and a new carol composed by the chorus’ new artistic director, Dominick DiOrio, who will conduct the concert. Visit info@mcchorus.org.