Longtime Mt. Airy residents Rob and Elizabeth Pelszynski opened the new Mt. Airy Taproom on Sept. 13, where Goat Hollow stood for most of the time since 1987. (Photo by Len Lear) by Len Lear Mt. … 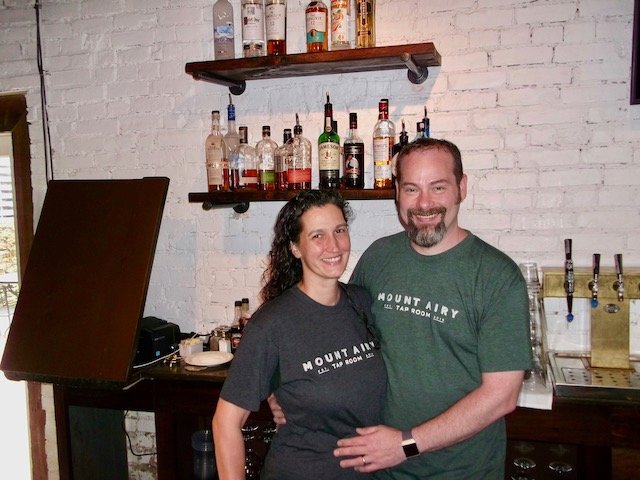 Longtime Mt. Airy residents Rob and Elizabeth Pelszynski opened the new Mt. Airy Taproom on Sept. 13, where Goat Hollow stood for most of the time since 1987. (Photo by Len Lear)

Mt. Airy ‘s Goat Hollow pub/restaurant was once as much a part of Mt. Airy as Lincoln Drive. The restaurant at 300 W. Mt. Pleasant Ave. opened in 1987, replacing Burba’s Restaurant/Bar and quickly becoming the kind of “Cheers-like” watering hole where “everybody knew your name.” The food was never the main attraction at the original Goat Hollow. Probably more than any other neighborhood alehouse in the city or suburbs, Goat Hollow was always known for the diversity of its clientele. There still are few if any area restaurants in which blacks, whites, Hispanics, Asians, gays and straights, working class and middle class, old and young intermingled so comfortably.

“The food was good, but that was not the main attraction,” Gene Foster, a West Mt. Airy resident who used to frequent Goat Hollow, told a reporter for the Local in a previous article. “It was definitely the people. You knew you would always have good conversation and maybe make new friends.”

Goat Hollow closed in 2004 after 17 years in business. After that, it was taken over by Angie Brown, who had previously owned and operated Mt. Airy Cafe and then Soul in Chestnut Hill. It operated starting in 2005 as Angie Brown with a New Orleans-themed menu, but from 2008 to 2013 the building was vacant.

In January 2013, however, the restaurant reopened, again called Goat Hollow but under new owners Neil Campbell, a Mt. Airy resident, and his business partner, Andy Shahan. Prominent Mt. Airy real estate developer Ken Weinstein had purchased the property, which was a private house when it was built in the 1920s, in November, 2011, and proceeded to make significant improvements. The unusual name Goat Hollow, by the way, was the historic name of a section of Mt. Airy. It is believed that a goat path ran out front near the buildings many years ago.

The second incarnation of Goat Hollow got off to a great start and reportedly did very well for a few years, but business gradually tailed off for reasons that are probably endemic to the restaurant business – burnout, rising cost of ingredients, staff turnover, new competing restaurants nearby, regular customers moving away, weather fluctuations, etc. Finally, Goat Hollow closed in January of this year after a six-year run.

But there is always a new risk-taker willing to walk out on the high wire without a net. In this case, the risk-taker is Rob Pelszynski, 44, a Mt. Airy resident for 13 years who is well qualified because he actually does have a degree from Temple University in risk management and insurance.

Pelszynski, who reopened the restaurant as the Mt. Airy Taproom on Friday the 13th (talk about risks!) of September, is a restaurant lifer, starting as a teenage Northeast Philly resident and St. Joseph’s Prep student. His first job was as a busboy at Bay Street, where Chickie & Pete’s is now on Roosevelt Boulevard in the Northeast. He followed the trajectory that is common in the business for the relentless, ambitious workers, from busboy to server to bartender to a management position.

Pelszynski later worked for Olive Garden on City Line Avenue, Houlihan’s on City Line Avenue and King of Prussia for five years. (“I was a server and bartender and then service coordinator, training a house staff of 30 people at age 23. The turnover was so high that almost every week there were new employees to be trained.”) Then Dock Street at 18th & Cherry Streets, Aspen in Fairmount as general manager from 2001 to 2008, Mahogany Cigar Bar on Walnut Street until 2011, El Camino Real in Northern Liberties until 2014 and Silk City as general manager until this year.

“I have always wanted to own my own place,” said Rob. “At age 23 I looked into owning a bar with a buddy, and 10 years ago I walked through this place after it was Angie Brown, but I just couldn’t make it happen. It would have cost too much for renovation on top of the cost of the building … Now I have a five-year lease with Ken Weinstein.

“After months of delays, we did a soft opening on Sunday, Sept. 8, since our liquor license finally transferred that week, and it coincided with the Eagles’ opening day game. It's been a wild first couple weeks, and the neighborhood has poured in to check us out.”

Rob lives within walking distance of the restaurant with wife Elizabeth, who works for a think tank for large corporations, and son Jake, almost 2. The new chef is Richard DiPietro, who previously worked in catering and before that at Eulogy, a Belgian bar/restaurant in center city. His new menu has lots of pub favorites like mac and cheese, chicken wings and mussels.

Mt. Airy Taproom is open every night for dinner until midnight. Saturday and Sunday brunch will probably follow in the near future. There are 55 seats indoors and 10 more at the bar. There is also an outdoor dining patio that seats about 40. Craft cocktails are available and 19 beers on draft.

You can check out the menu at MountAiryTaproom.com or get additional information at 267-766-6668. Len Lear can be reached at lenlear@chestnuthilllocal.com