The City of Philadelphia’s Streets Department is about midway through the process of replacing the pedestrian scale street lights along Germantown Avenue with LED fixtures. 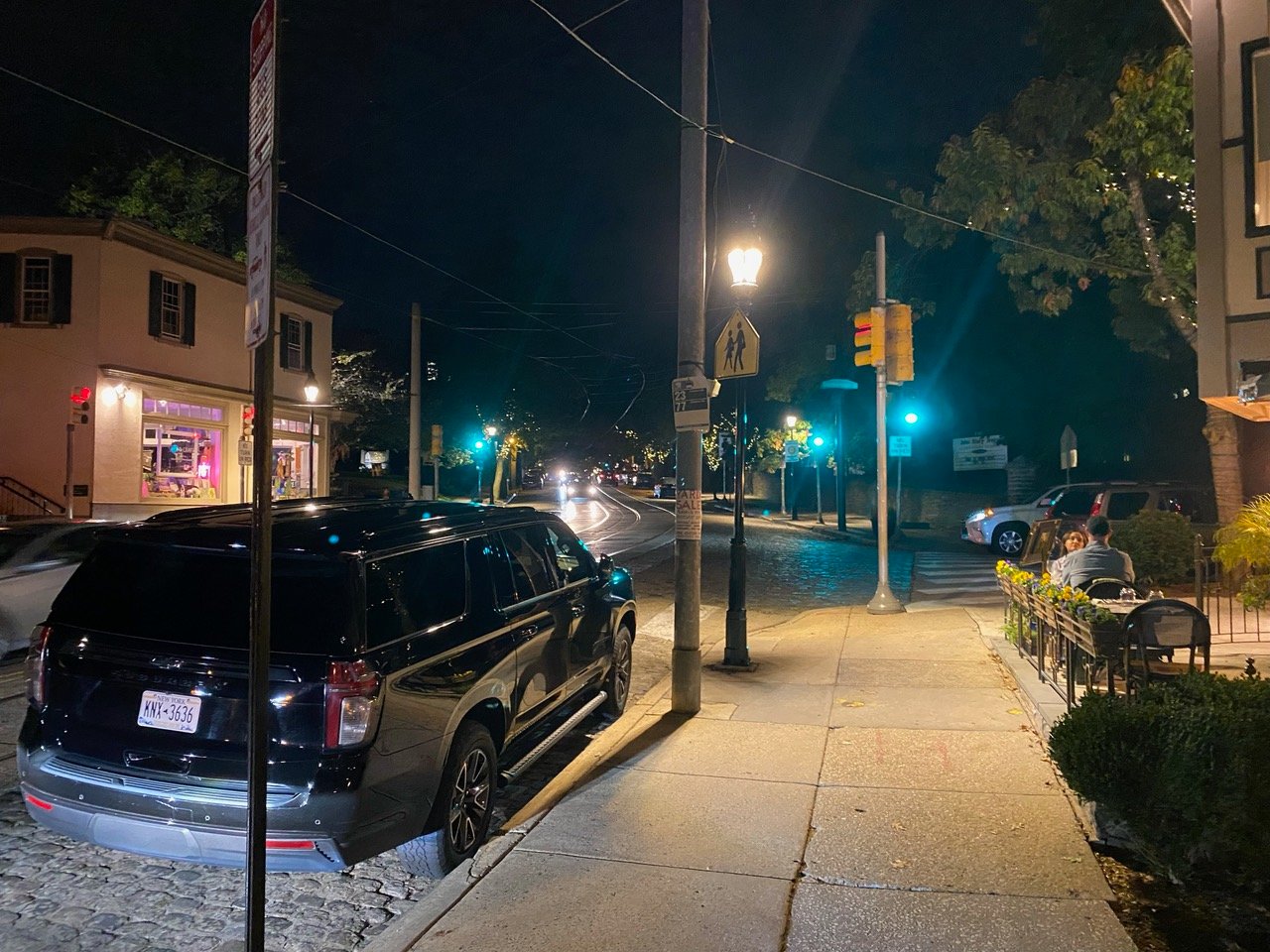 Work on the new LED sidewalk lights on Germantown Avenue, which are exact replicas of the existing poles but emit a whiter light, is about halfway finished.
Photo by Tim Breslin
Posted Thursday, October 20, 2022 12:00 am
by Carla Robinson

The City of Philadelphia’s Streets Department is about midway through the process of replacing the pedestrian scale street lights along Germantown Avenue with LED fixtures that are exact replicas of the existing historically designed poles.

That work started at the bottom of Germantown Avenue several weeks ago, and so far the replacement lights have made it up to the Chestnut Hill Hotel at the intersection of Southampton Avenue.

Meanwhile, residents who’ve been upset by the harsh new light coming from the cobra head LED replacements that were installed on their neighborhood streets over the summer are no closer to getting answers about what, if anything, the city is going to do to answer their complaints.

“I do need to go out to measure the lights at night, however I can probably do it during the day in a lab setting,” Deputy Streets Commissioner Richard Montanez told the Local in an email.

In another email, Montanez said he is waiting to receive a meter from the manufacturer that reads color temperature before he can take a reading.

“We will test one of the LEDs at our shop. If we get a different reading, we will address it with the manufacturer,” he said. “I will try to meet the community at the end of the month.”

The issue is the actual color of the lights. Light color, which is measured in Kelvins (K), comes in a spectrum. The yellowish glow of the old fixtures was about 2200K, while the new LEDs are supposed to be 4000K - which is more blue, and appears as a colder white to the human eye.

The 4000K LEDs are also at the limit of what is generally considered to be healthy for people as well as wildlife. According to most experts, anything higher than that can disturb the circadian rhythms of people as well as birds, insects, and even plants.

However, some who live next to the new lights say they’ve been getting light measurements of up to 6000K – causing them to wonder whether the fixtures that the city purchased are functioning properly.

In an email, Montanez said the fixtures he bought are supposed to be 3000K for Germantown Avenue, and 4000K for the residential streets.

“If we measure a color temp at 6000K, we would have the manufacturer pay for an independent lab to verify the temperature,” he said.

At that meeting, Montanez said that he hoped to address complaints with a pilot project for dimming many of the lights that his department had already installed, which he admitted were too bright.

“Are we too bright in Chestnut Hill? Yes, we are,” he said. “I’m not going to disagree with that.”

Williams agreed with that assessment.

“Take it from a person who values his sleep, I do understand when something is disruptive in a community. It's very important,” Williams said at the meeting. “I’m sure you guys do not wish to wait years in order to have this problem addressed.”

Chestnut Hill’s new lights are a precursor for a citywide plan to replace all existing 150,000 street lights in Philadelphia with LEDs, which will save money, reduce the city’s carbon footprint and can be remotely controlled. According to Montanez, the remote control feature will not only help the city keep all the lights in working condition, it will allow for light levels to be raised or dimmed on demand.

According to Montanez, the dimming technology is not part of the first phase of the $92 million project, but will come at some point in the future. He couldn’t say when, or where the funding will come from.

In an online survey of the situation conducted by the Local, the residential street lights are overwhelmingly unpopular. As of press time on Tuesday, a total of 265 people had completed the survey, with 73.3 percent strongly disliking them. Only 4.2 percent of respondents said they like them.

The Germantown Avenue pedestrian lights, while bright, do not appear to be as unpopular as the residential street lights. “They’re definitely an improvement from the yellow ones that were there before,” said one resident, who declined to give their name.