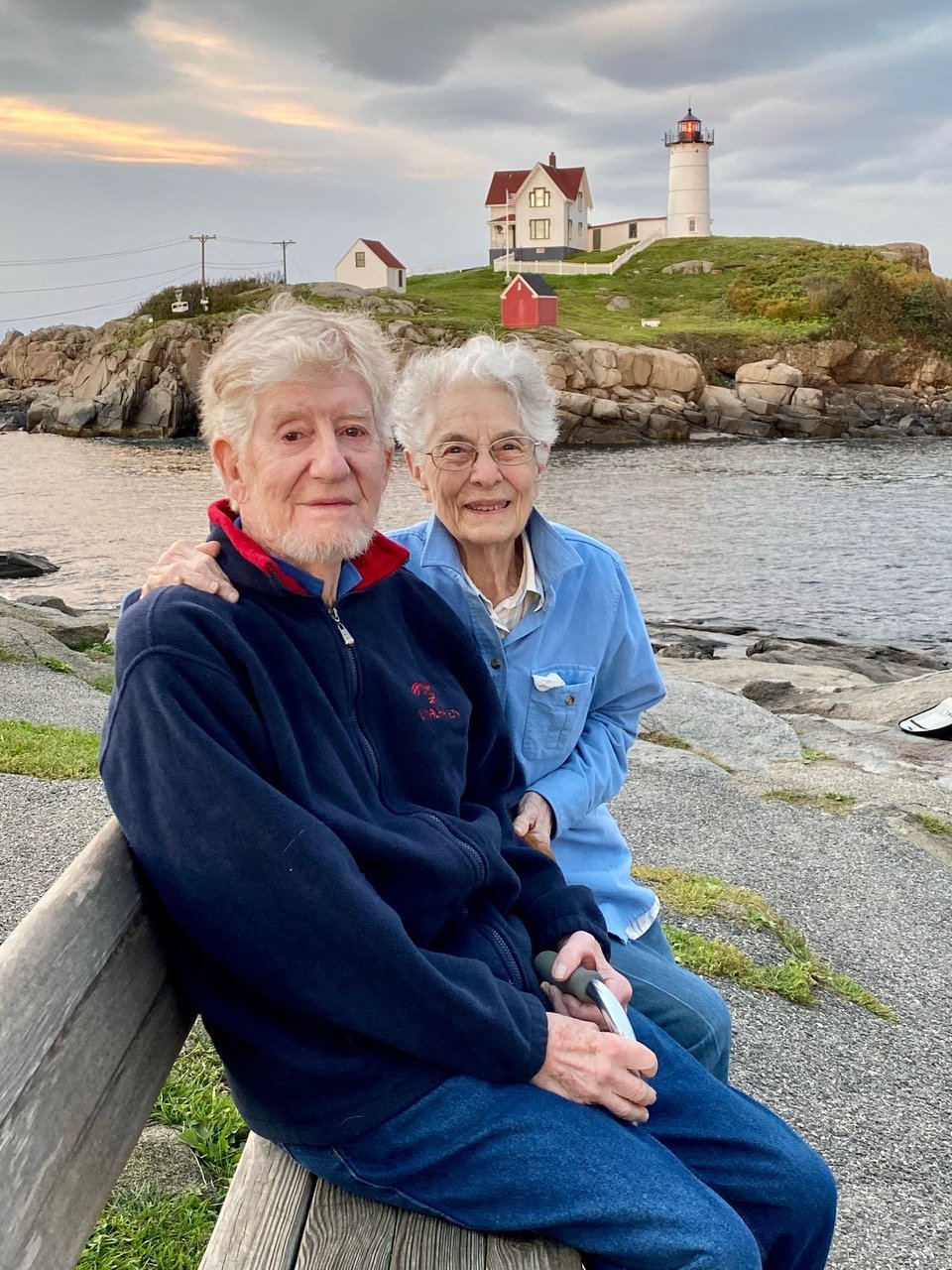 This is the last photo taken of Peggy (with Paul) before her death last November. It was taken in Maine (see the iconic lighthouse in the background), where they spent parts of 50 summers in their own waterfront place on Vinalhaven Island. 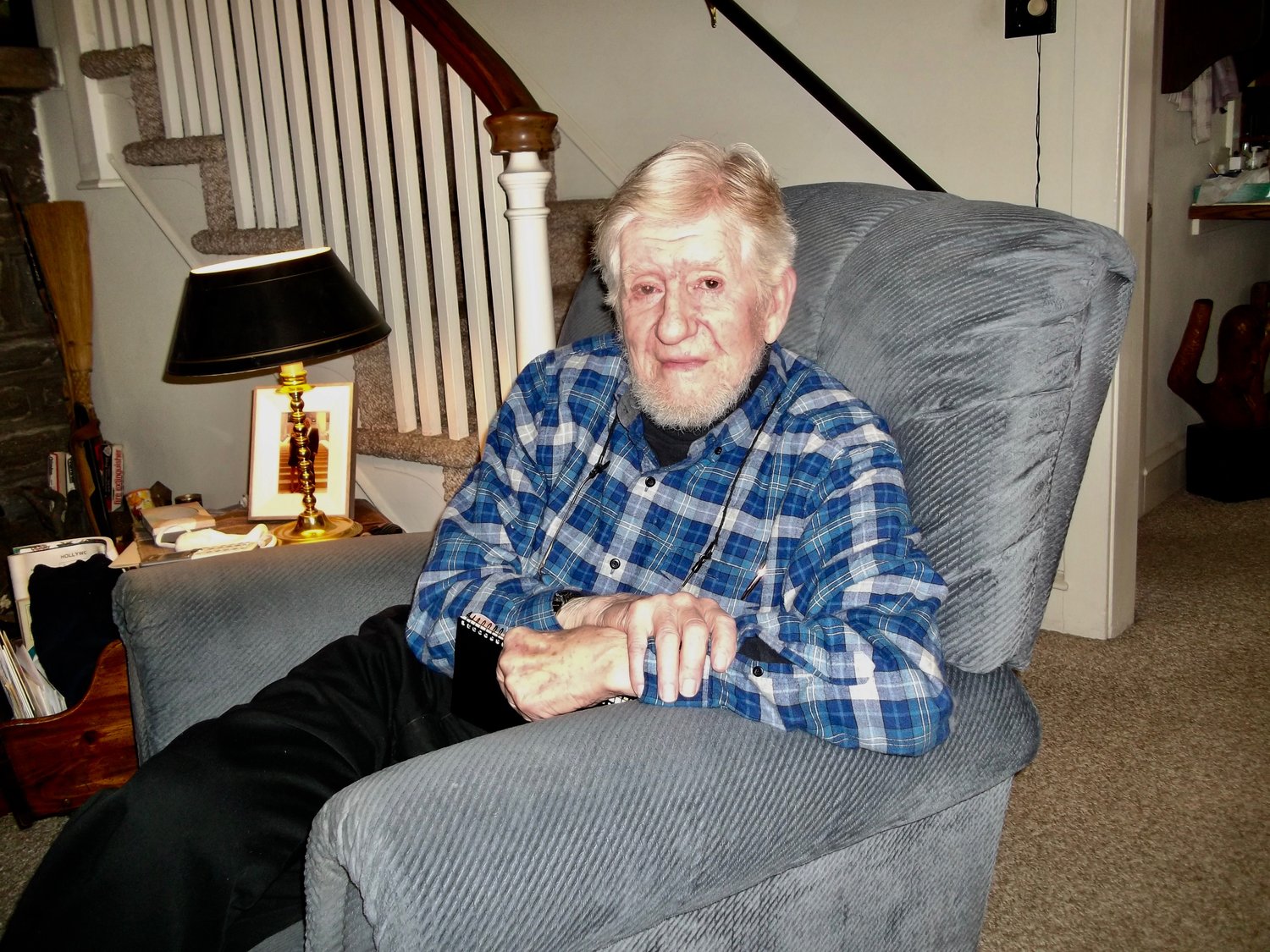 Paul Buck, 89, gets ready-to-eat meals three times a week, prepared by his neighbors, delivered to his Erdenheim home, which was built by his father 97 years ago.
Previous Next
Posted Friday, February 18, 2022 6:00 am
by Len Lear

Everyone should have neighbors like those of Paul Buck.

When a loved one dies, it is not unusual for one or two neighboring families to stop by with a plate of food for the grieving survivor. But after lifelong Erdenheim resident Paul Buck's wife, Marguerite “Peggy,” died last November at the age of 89, a group of 14 neighboring families got together and created a “food train” that has been delivering home-cooked dinners three times a week ever since.

“I had never even met many of these families,” Buck, 89, said last week during an interview in his living room, “but they bring me fabulous meals and want to stay and talk. It was a real shock, and I am so appreciative of what they are doing that I wanted a wider audience to know how caring this small community is.”

“The Bucks were such a wonderful couple, so kind and sweet and tender,” Hararis said. “It broke my heart when Peggy passed away.”

“I have a son who is a cancer survivor, and when he had cancer, other people in our then-neighborhood in North Carolina created a 'meal train' for us,” Harris said. “I did not have to cook for an entire year. That's what gave me the idea to do this for Paul. I wanted to pay it forward.

Harris said the group plans to continue cooking meals until the end of March.

“Paul appreciates this so much, but I feel I am getting more out of this than he is,” she added.

Buck, who still lives in the house that his carpenter father, Frank, built in 1925, graduated from Springfield Township High School and the Rochester Institute of Technology, majoring in photography and film. He did graduate work at Ohio University in Athens, Ohio. Except for his years at college and in the military (he served in the Army in the Korean War, but not in combat), he has always lived in Erdenheim.

Buck and his wife lived in their home near Bethlehem Pike for 57 of their 65-year marriage. They raised their three children - Steven, Karen and Gregory - there. During my 90-minute visit, two of the children called to check on their father. (He does not drive anymore and has no car.)

“When I was younger, I jogged on Forbidden Drive for 17 years, but eventually my knees gave out, and I had them both replaced,” Buck said. “In recent years, Peggy and I would walk around the neighborhood, hand-in-hand, to stabilize ourselves. We'd stop to talk to people. They are so friendly around here.”

Buck said he and Peggy were active right up until the end of her life.

“Peggy hiked every trail in the Wissahickon with our rescued greyhound, Sebastian, who was such a great joy and lived to be 14,” he said. “[Peggy’s] death was the worst thing that ever happened in my life. I still say goodnight to her every night.”

In 1979, Buck, who taught filmmaking as an adjunct professor for 30 years at the University of Pennsylvania, and business partner Art Ciocco started VISIONaries, a documentary film production company. Peggy Buck was a sound technician for some of her husband's films. Their first film, entitled “Should the Lady Take a Chance?” won an award and dealt with the issue of whether or not Atlantic City should initiate legalized gambling in an attempt to revitalize the city.

During the succeeding four decades, Buck and Ciocco always made films that had strong issues-oriented content. For example, a one-hour documentary for PBS in 1975 entitled “Equality,” which was about the issues of race, women's rights, economic rights and ageism, won eight national awards. But Buck said in an earlier interview with The Local that the film he is most proud of was "The Quiet Revolution," created for the Brandywine Conservancy around environmental issues.

Possibly the most unusual film made by Buck and Ciocco was produced in Micronesia in 1975. Buck had previously made a film with Euell Gibbons, famous author and wild food expert, on a remote uninhabited island off the coast of Maine.

“We ended up in Micronesia and then went on to Tomaton Island, where about 150 people lived in thatched houses, built dugout canoes and lived essentially off the land surrounded by coconut and breadfruit trees, sparkling seas and a very simple life.”

More information at paulbuck7@aol.com Len Lear can be reached at lenlear@chestnuthilllocal.com