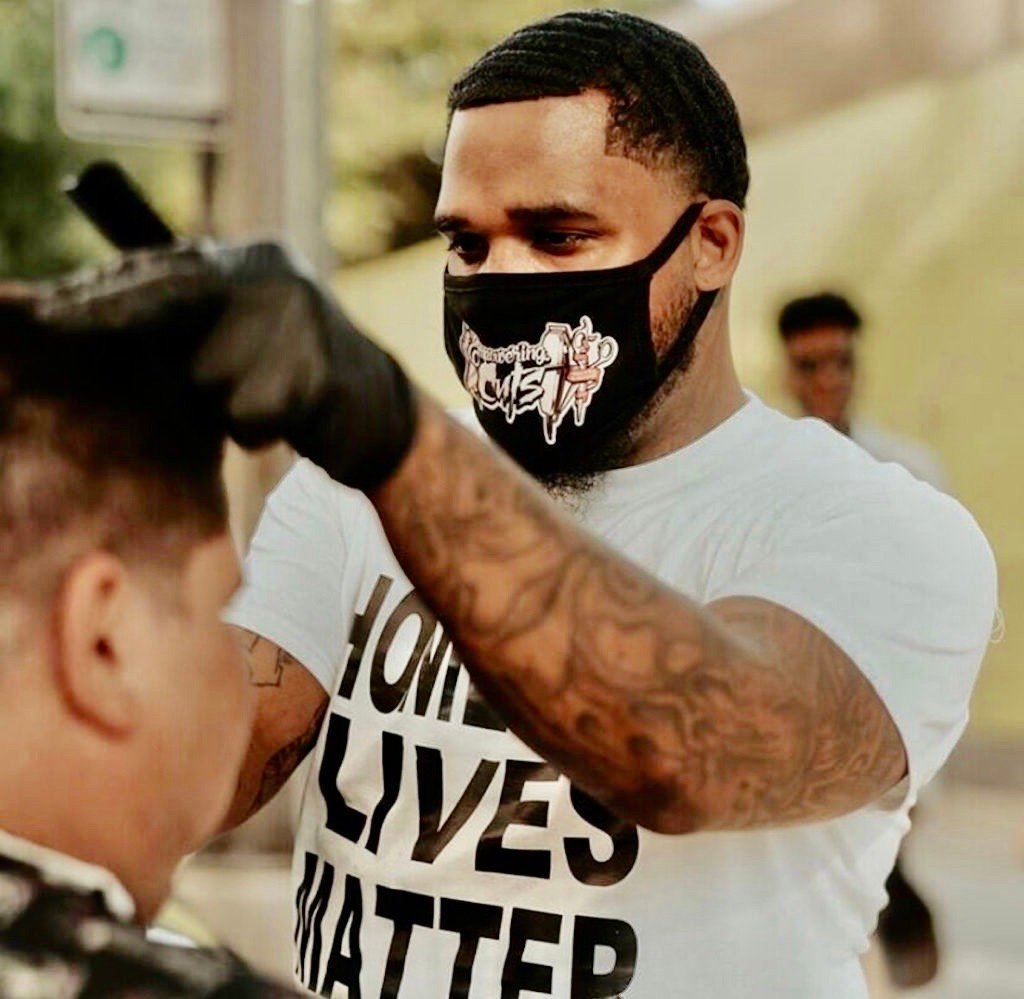 Josh Santiago, who has given more than 9,000 free haircuts to homeless people since 2015, was recently profiled by “NBC Nightly News” national correspondent Kate Snow as he was providing his free service on Chelten Avenue in Germantown.
Photo courtesy of empoweringcuts.com
Posted Thursday, July 7, 2022 12:00 am
by Len Lear

If you watch any of the three major TV networks' editions of the evening news, you know that they usually report on mass murders, some kind of political controversy, natural disasters, or the war in Ukraine. In other words, downbeat and depressing reports — followed by a one- or two-minute upbeat story at the very end about a Good Samaritan, unsung hero, miracle rescue or recovery from a normally fatal injury or illness.

We normally watch ABC’s “World News Tonight’ with David Muir when we are home at 6:30 p.m., but for some inexplicable reason, on April 24 of this year we were watching “NBC Nightly News” when correspondent Kate Snow came on for the last two minutes to deliver the obligatory heartwarming story to lift our spirits after watching so much tragedy.

Her story was about Joshua Santiago who founded the nonprofit Empowering Cuts: Humanizing the Homeless in 2017. Santiago brought his mobile barber shop, a converted recreational vehicle purchased through a GoFundMe campaign, to Chelten Avenue near Chew in Germantown in order to give free haircuts to homeless people.

It turns out that civic groups and churches that know about Santiago contacted him to request that he provide his free service, which he does in Philadelphia neighborhoods and beyond. One of those organizations had contacted “NBC Nightly News.”

“I can't even tell you how many donations we got from all over the world after that segment appeared on TV,” Santiago told us last week. “It was unbelievable. It was so great to find out that so many people really do have a heart for the homeless. And we really need the help.”

According to Elijah Fleming, one of Santiago’s clients who was featured in the TV segment, “These haircuts are lifting our spirits. You feel much better afterwards.”

Santiago, who grew up in Wilmington, can identify with the homeless people whose hair he cuts, many of whom have issues with drug addiction. Santiago's parents were addicted to drugs, and he himself was arrested on drug-related charges.

But he was determined to change the trajectory of his life when he enrolled in a barber school in Wilmington back in 2015. It was a two-hour drive from his then home in North Philly, but he accepted the commute because the school offered financial aid. The instructor would take him to homeless shelters to give the residents haircuts for free.

“My teacher said it would make them feel so much better and also give me experience in cutting hair with real customers, so it was a win-win,” Santiago said. “When I saw how much better it made the homeless people feel, it made me feel great, too. It was honestly better than being paid money.”

Santiago has continued his mission ever since, and now he provides the service four or five times a week. Sometimes he goes out with other volunteer barbers and even cosmetologists. He said he has done approximately 9,000 to 9,500 haircuts so far, in many Philadelphia neighborhoods, South Jersey and also as far away as Dallas, San Antonio, Chicago, Los Angeles, San Francisco, Tampa and Las Vegas.

“In Vegas,” he said, “the homeless live in underground tunnels. They have been in the dark so long that their eyes look blind.”

According to Project HOME, a local nonprofit that works with the city's homeless population, there are approximately 20,000 homeless people in Philadelphia.

“A haircut itself can be great, and the actual acts of service itself can be therapeutic and empowering,” Kara Cohen, a nurse practitioner at Project HOME, said in an earlier interview. “Experiencing homelessness can be so isolating, So there is value in making eye contact with folks. There is value in speaking kindly to people, being present for people, and hearing their stories.”

“Something as simple as a haircut can mean so much,” Santiag added. “Instead of spending $20 on a haircut, they can spend it on food. I get to know them and have conversations. We have been able to get some into in-patient drug treatment programs and have had some real success stories.”

To make a donation, visit empoweringcuts.org. Len Lear can be reached at lenlear@chestnuthilllocal.com