G’tn’s ‘We Bee Brothers’ on crusade to save honeybees

G’tn’s ‘We Bee Brothers’ on crusade to save honeybees 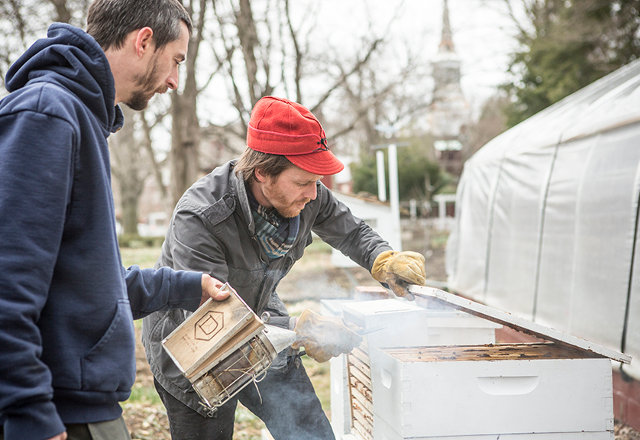 Brothers Joel and Jeff Eckel are tending to the hive. (Photos by Michael Persico)

Brothers Joel and Jeff Eckel are always on the lookout for something that would send most folks running in the other direction: a seething glob of crawling, humming honeybees, swarming to look for a new home.

On one occasion, Jeff, one-half of Germantown's We Bee Brothers, got a call from a Kensington homeowner who saw a swarm of honeybees in a small tree, about eight feet off the ground.

Pleased at the prospect of such an easy catch for a new hive, Jeff drove over immediately. By the time he arrived, the bees had already flown away.

"That's kind of heartbreaking, when you get there and they're already gone," he says. But as he was driving out of the neighborhood, he happened to look up when he came to a stop sign, and there was the swarm…resting in a 40-foot tree.

Jeff is a tenacious beekeeper, and honeybees are an increasingly precious resource, as the U.S. loses a significant percentage of its hives to the mysterious ravages of colony collapse disorder. (Just last week, The New York Times reported on another massive die-off.) Jeff parked his car and strolled the block, trying to think of a way he could bring the swarm home to an empty hive.

He turned a corner and noticed a trio of bucket-trucks working on a power line. "Sure, no problem," said a friendly operator when Jeff explained his mission. Jeff already knew how to operate a forklift from his work at a beer distributor, so after a successful crash course in the bucket truck's controls, up he went with his bee box and veil.

"Bees are flying around, it's kinda crazy," recalls Jeff. "People are coming out in the street and looking at it. Seems like quite a sight, I guess."

Joel promises that while a honeybee swarm might look frightening, without a hive to defend, they are not likely to sting. Plus, they've just had a Thanksgiving-sized dinner of all the honey they could hold before flying away, so they're plump and drowsy. "I've definitely stuck my bare hand inside a swarm and not gotten stung," he explains.

A second-grade teacher at William Penn Charter School, Joel founded We Bee Brothers with Jeff after receiving his first hives in 2007, just as Colony Collapse Disorder was beginning to make headlines and drive the urban beekeeping trend.

Now, in addition to capturing wayward colonies, the Glenside-born brothers maintain about 30 hives throughout Germantown (including a colony at the historic Wyck House), act as a resource for others interested in beekeeping and sell customized batches of local raw honey.

Part of Joel's personal mission is educating people on the myriad varieties of honey and its uses. He explains that every hive's honey has a unique taste depending on what time of year it's harvested and what kind of flowers the bees are alighting on. Honey can be naturally flavored by buckwheat, alfalfa, wildflowers or orange blossoms — or Philadelphia's linden and tulip poplar trees. Joel also enjoys infusing gathered honey with herbs like thyme, rosemary, lavender and mint.

Joel explains that the area is a great place for bees, and not just because many environmentally-conscious residents are supportive of hives' role in the local ecosystem.

The trees of the Wissahickon are a short flight away (bees can fly up to a few miles from the hive in search of nectar and pollen), and bees in the modern urban environment often fare better than their rural counterparts.

"But we definitely have lost some hives to pesticides," says Joel. He asks people to remember that if you spray a weed with chemicals while it's flowering, "the bees feed off it and bring it back to the hive and die."

The local landscape — including nearby Weavers Way farm and Awbury Arboretum — isn't the only reason bees thrive in Germantown. Beekeeping is a local tradition.

Properties like Wyck House and Grumblethorpe "want hives for educational purposes," Joel notes, and it's "historically accurate, because in those days most homes had hives, so the Germantown area is really good for us that way."

We Bee Brothers has been maintaining hives in the Wyck House gardens since 2008. Wyck horticulturalist Elizabeth Belk recently welcomed this reporter for a visit, as the early March sun melted the last traces of a small snowstorm.  The resident chickens stretched in the dirt like ecstatic sunbathers, and the hive's entrance teemed with bees enjoying the spring-like day.

"The bees are crazy in here in the summer," says Belk of Wyck's 80 rose plants. The blooms lend their flavor to the Wyck honey.

For his part, Jeff is anxious to educate people who are dismayed when a swarm alights in their trees or when a honeybee colony takes up residence in the walls of their house.

"A lot of people don't know that federal law prevents you from exterminating honeybees," explains Jeff. So homeowners who call an exterminator to rout the colony get charged for the visit, but learn that, by law, the exterminator can't help.

Fortunately, there is usually somebody a phone call away who would be thrilled to remove the bees without harming them. "Know your local beekeeper," says Jeff.

Reprinted, with permission, from www.flyingkitemedia.com