Haitian Catholic priest and accountant the Rev. Joseph Philippe recently visited the First United Methodist Church of Germantown, hoping to add support to the establishment of a public bank. 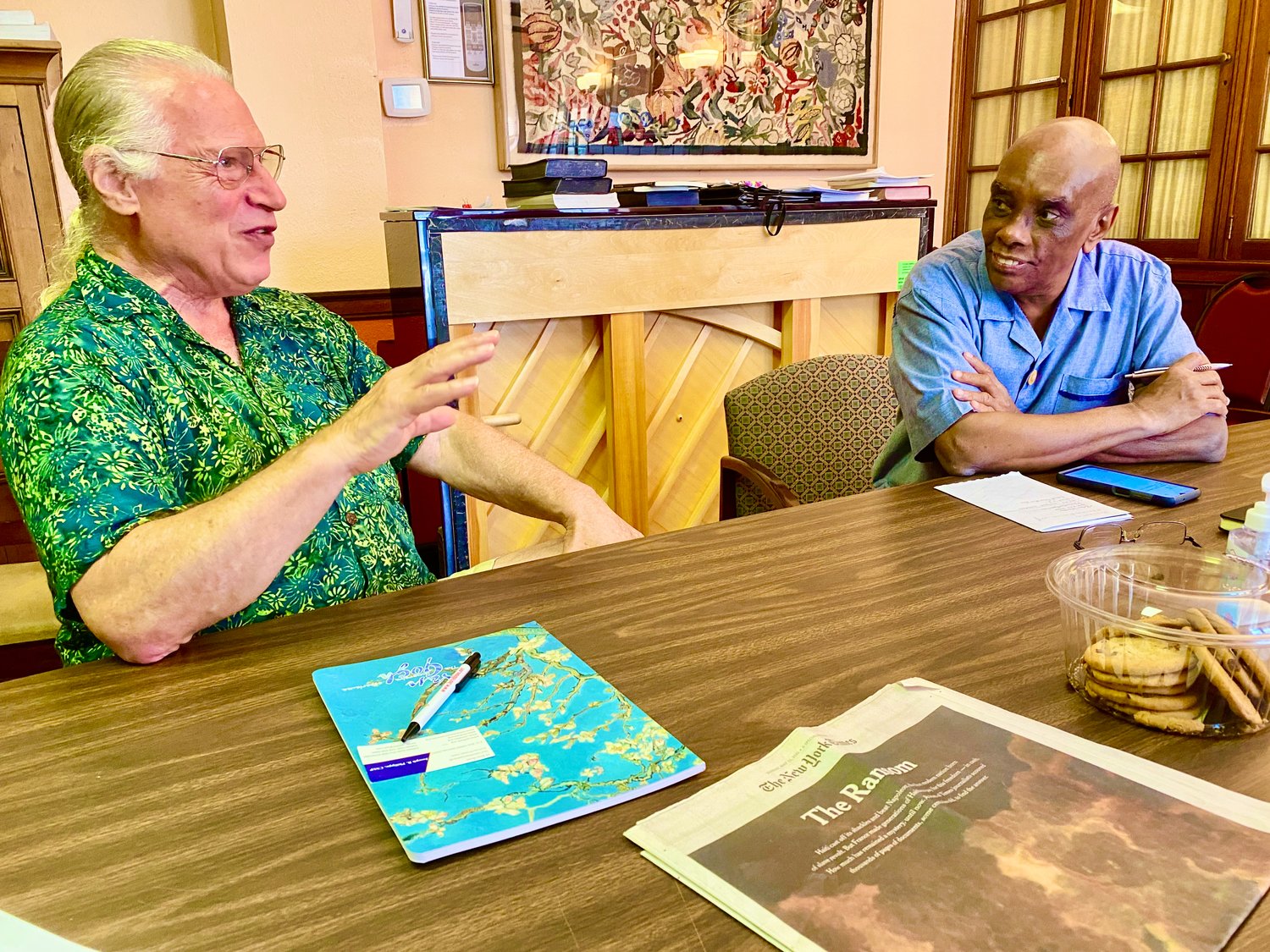 Peter Winslow (left) and the Rev. Joseph Philippe discuss the merits of opening a public bank in Philadelphia.
Photo by Ray Torres
Posted Thursday, September 1, 2022 12:00 am
by Constance Garcia-Barrio

Haitian Catholic priest and accountant the Rev. Joseph Philippe recently visited the First United Methodist Church of Germantown, hoping to add support to the establishment of a public bank in Philadelphia.

In a way, Rev. Philippe was returning a favor.

Mt. Airy resident Ray Torres hosted Philippe back in 1994, and became a key member of a FUMCOG Haiti committee that helped raise $2000 to start a bank, Fonkoze, in Fondwa, Philippe’s hometown in western Haiti.

That bank, which started out with one office and three employees and has since grown to more than 40 branches and 200,000 members nationwide, provides micro-loans to the “organized poor,” in Fondwa, Torres said.

During his recent visit, Philippe, who’s working on an economic development loan fund to create wealth in rural Haiti, said microfinance - financial services provided to low-income people or groups that are typically excluded from traditional banking - can build Haiti from the bottom up.

And he urged current members of the Philadelphia Public Baking Coalition, including Torres, Peter Winslow of Mt. Airy, and Kay Lasker, who lives in Northeast Philadelphia, to replicate his economic empowerment model through a public bank in Philadelphia. About 25 percent of Philadelphians lived below the poverty line in 2017, according to the Pew Charitable Trusts

“Fonkoze is a cooperative bank that supports Haitian grassroots organizations and small businesses,” Philippe said. “That model could work in poor neighborhoods here. Say you take an area of 10 square blocks, get people together and listen as they describe their most pressing needs. You can then identify gaps in the availability of credit in the neighborhood and learn why those gaps exist. Public banks respond to the needs of the people in the area they serve.”

The coalition’s pamphlet, “Let’s Start a Philadelphia Public Bank,” explains how the bank would work. It is designed to partner with other entities in the local financial ecosystem, the pamphlet says, so it would not have the overhead associated with branch offices, ATMs or private accounts - keeping expenses low.

The public bank would lend and invest funds in ways that help redress inequalities that result from racial and gender bias, and finance projects for unserved or underserved communities, proponents say.

A public bank could help offset the financial damage caused by the once-legal practice of denying loans or services in certain  geographic areas because of the racial makeup of the people who lived there, Winslow said.

“The public bank could offer a ‘second-look mortgage program’ that would reconsider as much as $62 million of residential mortgage applications now being denied to prospective minority homeowners,” Winslow said.

A public bank could also look at how to raise the quality of life in a community without displacing people and destroying the community’s culture through gentrification, Winslow continued.

“Programs of a public bank could promote the beneficial aspects of community development while offsetting the detrimental effects by financing land banks,” he said.

Coalition members say that a public bank could cut the cost of repairs to schools, libraries, and other municipal facilities because it would charge lower interest rates than Wall Street banks - which may be one reason that public banks are growing in popularity worldwide.

“Germany and India have public banks,” Torres said. “Closer to home, North Dakota has had one since 1919. Thanks to that bank, North Dakota has recovered faster than its neighbors from national disasters. They finance their bond issues, provide liquidity to community banks and credit unions, provide student loans and return money to lower state taxes. Philadelphia could adapt North Dakota’s successful programs.”

Earlier this year, the city seemed poised to launch the Philadelphia Public Financial Authority (PPFA), a precursor to the public bank. City Council enacted legislation in March by a vote of 15 to 1 to move forward. “So far, however, Mayor Kenney has refused to implement this legislation by appointing a board of directors or providing any funds,” Torres said.

In a June 22 letter to City Councilmember Derek Green, who is leading the effort to create a public bank in Philadelphia, Kenney said he supports the goals of the group but believes that existing institutions, such as the Philadelphia Industrial Development Corporation, can accomplish the same thing - without putting the city at financial risk.

Because the group’s proposed legislation would give the public bank the right to buy and sell securities, Kenney wrote, that would create “tremendous risk when the only proposed funder for this agency appears to be the City.”

Winslow, however, believes a public bank is the right solution, and said he hopes that Philippe’s visit will help the coalition progress.

“Like Bishop Tutu and Mother Teresa, Father Joseph is a religious leader who has pioneered economic development in impoverished communities,” Winslow continued. “We’re pleased to have a relationship where we learn from each other.”

For more information about the Philadelphia Public Banking Coalition, visit philapublicbanking.org. You can also find a video of Rev. Philippe discussing the Bank of Fonkoze on YouTube.