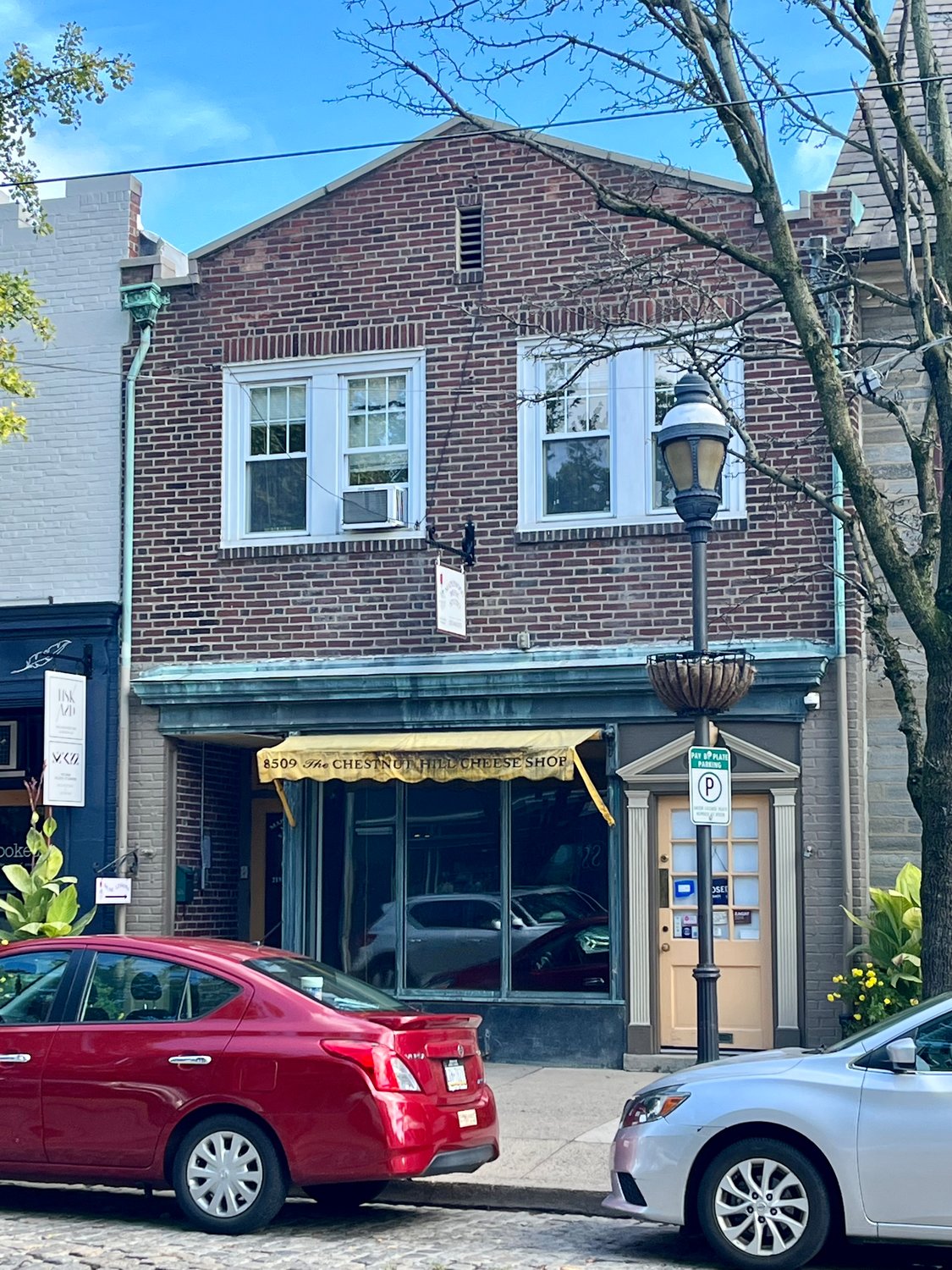 The City Streets Department is now scheduled to begin replacing the sidewalk light fixtures like this one outside the old cheese shop with replicas that use LEDs next week. The new lights will be brighter and cooler in color than the current ones.
Photo by Carla Robinson
Posted Wednesday, September 14, 2022 12:00 am
by Carla Robinson

With city workers scheduled to begin replacing the historic pedestrian streetlights along Germantown Avenue with replica LED fixtures  on Monday, questions still remain about what’s happening with the much taller new street lights that went up along the neighborhood’s residential streets early this summer.

In response to resident’s complaints about the lights’ harsh glare, Deputy Streets Commissioner Richard Montanez had promised to look into setting up a pilot project to test out technology that could dim them. As of last week, however, Montenez said he had not yet found the funding he would need.

City Councilmember Cindy Bass, who arranged a zoom call with Montanez and Streets Commissioner Carlton Williams for concerned residents last month, told the Local on Monday that she would reach out and “light a fire.”

“I will follow up on that, and re-state that there is a sense of urgency around this matter,” she said.

Bass said she would also ask Montanez to come out to Chestnut Hill within the next several days to measure the color of the light being emitted by the new fixtures. Light comes in a spectrum of color, ranging from warm reds and yellows to cooler blues, which appear to be much brighter white to the human eye. Color is measured in Kelvins, with lower numbers producing warmer light and turning bluer, or whiter, as the number goes up.

According to Montanez, Chestnut Hill’s new lights are supposed to be 4000K, which is already much cooler than the old lights, which were 2700K. But Highland Avenue resident Tim Breslin, who has light metering equipment, said the new fixtures are actually producing 6000 Kelvins – a number which can be harmful to human health.

“I will ask to get out there within the next few days to address that,” Bass said. “That is obviously a concern.”

Chestnut Hill resident Liz Compitello, who is manager of sustainable energy at the Delaware Valley Regional Planning Commission and has been helping suburban municipalities in the Philadelphia region make the switch to LEDs, told the Local that Chestnut Hill’s lights are now about three times more intense than those that have been installed in neighboring communities of Wyndmoor and Cheltenham Township.

So far, the DVRPC program has helped 71 suburban municipalities transition to LED fixtures, Compitello said, adding that about 75 percent of those towns chose lights that are 4000K. The remainder chose 3000K – although typically they chose that color range for historic areas.

“We did pilots around the region, so people could see what the different color lights felt like, and choose from a suite of products,” she said. “We didn’t really try to steer them, one way or the other. It just came down to preference.

“Some maybe were driven to the 3000K because they felt it looked more aesthetically pleasing in a historic area,” she continued. “But the majority felt that 4000K just looked cleaner and clearer.”

Two neighborhoods close to Chestnut Hill currently offer a natural experiment for anyone curious about the difference.

That is one reason why so many Chestnut Hill residents hate the new lights. They’re just too bright.

“In my own personal experience, I like the 4000K – when it's done with appropriate lumination levels. It does feel okay, it does feel good,” Compitello said.

Still, the change can be jarring - even when the light levels are “appropriate,” she said.

“People often react to what they see as a dramatic difference from what they’re used to,” she said. “Very often the initial reaction is ‘like, oh my gosh, this is so blue.’”

As for various studies that show blue light having negative health effects on humans, she said, that is directly related to the intensity of the light.

“The melanopic content of blue light is directly correlated to the quantity of light,” she said. “The greater the lumens, the more likely you are to experience a negative impact.”

If 4000K lights are designed appropriately, she said, it should not have a harmful effect on humans, she said.

“There are potentially some harmful effects for bird migration, insects and other animals that live outdoors,” she said. “The research on this is really evolving.”

It’s not uncommon to “over engineer” the light, and install a higher wattage bulb than you expect to use regularly, and then dim it down, because that can extend the life of the bulb.

“It’s a good move to do that, because it does boost that maintenance benefit that you're already getting from the lights,” Compitello said.

Another helpful feature about LEDs, she said, is they are also much easier to control.

“The high-pressure sodium bulbs throw light everywhere – I have an image that shows huge blobs of orange on the pavement, and in the sky, whereas LEDs are a very directional light source. You can throw the light exactly where you need it,” she said.

Still, that doesn’t appear to be working in Chestnut Hill. Compitello said she does not have a light directly outside of her home on West Meade Street, but can still see the light coming in through the blinds.

“As a resident, I was surprised by how bright they were,” she told the Local. “I’m looking forward to seeing what the city is going to do with the design strategy.”

The new sidewalk fixtures going in this week will be exact replicas of the current fixtures, according to Montanez.