After an effort to shower the Philadelphia Streets Department with complaints, residents of the 200 block of West Highland Avenue got the glare of their new LED street lights cut in half. 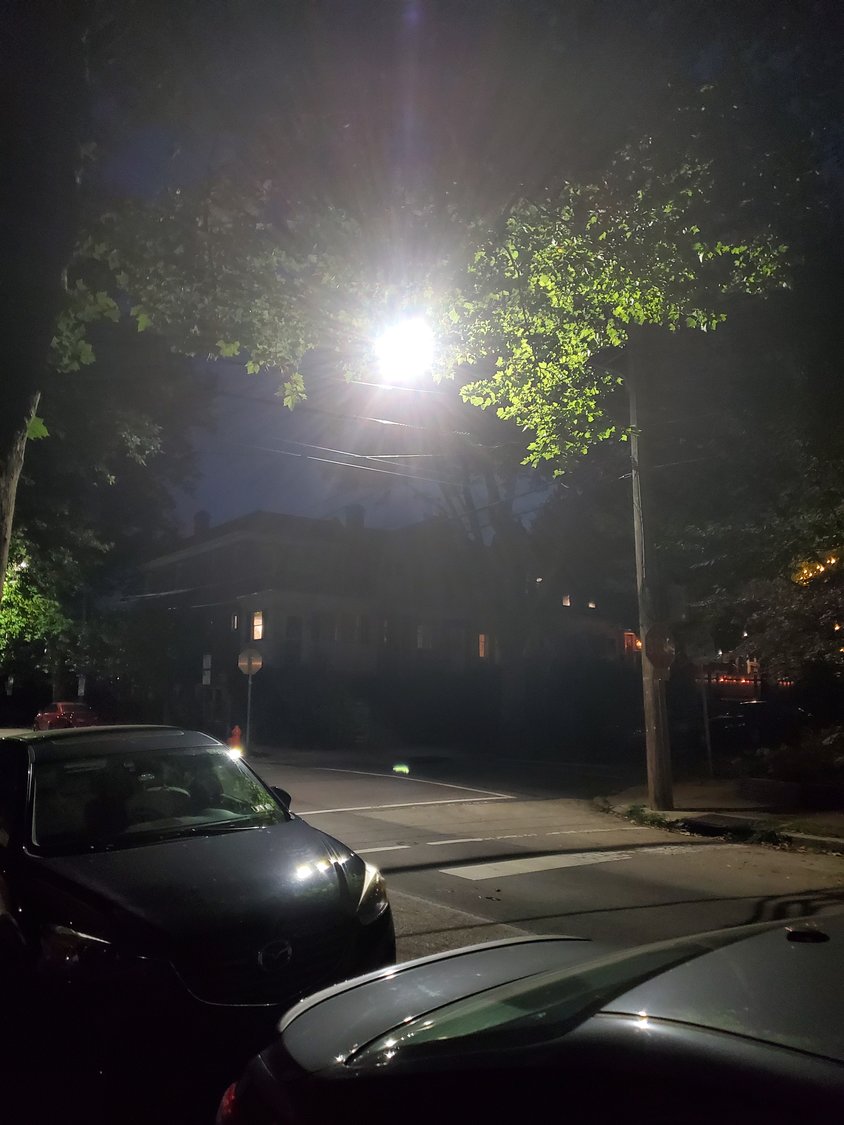 Some residents say this light on East Highland Avenue is so harsh they feel they have to squint when they go outside at night.
Photo by Laura Lucas
Posted Wednesday, July 13, 2022 12:00 am
by Carla Robinson

After an organized effort to shower the Philadelphia Streets Department with complaints, residents of the 200 block of West Highland Avenue successfully got the glare of their new LED street lights cut in half last week.

“We changed the lights at the request of the residents, reducing the lumens down to 9000 from 18,000,” said Richard Montanez, deputy commissioner of the city Streets Department. “We also removed an extra pole.”

As of presstime yesterday, however, the Local remained unclear about what’s happening on various other blocks in the neighborhood - as residents of other blocks are equally upset about what they describe as a harsh white glare cast by the new fixtures.

“I can hardly keep my eyes open when I walk my dog at night, it’s so bright,” said Laura Lucas, a past president of the Chestnut Hill Community Association who lives on the east side of Highland Avenue. “I appreciate all the people who want safety. I want safety too. But this light is so harsh - I can’t believe that anyone would want it in their neighborhood.”

The new lighting is connected to Philadelphia’s Citywide LED Streetlighting Conversion Project, which will replace 120,000 existing lights with a network of smarter, more efficient LED fixtures - saving money and cutting down on energy consumption. The plan calls for some streets in Chestnut Hill to get lights that are double the intensity of others - 18,000 lumens rather than 9000.

Even more important, however, is the color range - as the new LEDs are currently emitting a much harsher blue light than the yellowish glow cast by the old ones.

The color of light is measured in Kelvins, with lower levels being closer to yellow and higher numbers more blue - which appears to be a hard kind of white to the naked eye. The new city street lights have a Kelvin range of 3500 to 4000, while the old fixtures had a range of 2200.

In 2016, the American Medical Association warned that blue light can negatively impact circadian rhythms of humans and other animals, throwing off health sleep cycles.

Anne McNiff, executive director of the CHCA, said she remains frustrated by a lack of clear answers from officials in the city Streets Department about just what residents who don’t like the new lighting can do about it.

“It does have an impact on the character of the neighborhood, but it’s not just about aesthetics,” she said. “This harsh blue light can have a negative impact on human health, and there are also considerable environmental concerns.”

Lucas said she’s not a technical person, and doesn’t have enough knowledge to say what the light level should be. She also appreciates the fact that the city of Philadelphia has bigger problems to deal with, she said.

“I don’t know much about lumens, or color ratings. I just know that as a human, and as a resident, this is not right,” she said. “And while this is not the biggest problem that the city is facing, it is one that could easily be fixed. We’re asking for the city to listen to us, to look at what we have here, and help us.”

Montanez, whose department decides which streets get the higher intensity lights based upon their width and how heavily trafficked they are, said his challenge is to find a light level that works citywide.

“Everybody has their own opinion when it comes to lighting. There are some that say ‘I want it to stop at the bottom of my steps’, others who want it to come up all the way to the keyhole on their front door,” he said. “I’m picking lights that work with our camera surveillance system. I’ve got to treat the city of Philadelphia equally. To me, the city is the city.”

Montanez said he expects the new system to improve safety, reduce crime and make it safer to walk at night. In addition, he said, the city’s $92 million light replacement project will include dimming technology that can tone down the glare.

“We are procuring a system that will allow us to dim the lights down,” he said. “The reason people are seeing a lot of overlit streets is that the city has not procured a light control system yet.”

“The reasoning behind putting in what some people say are really bright lights is that we want to dim them down, and only turn them up if there's an emergency,” said Montanez, adding that his department is now in the process of conducting a light audit of the entire city.

Still, the dimming technology will not have the capacity to change the color range, he said.

Bill McGeeney, secretary of the Pennsylvania chapter of the International Dark-Sky Association, said that with the right technology, most modern LED fixtures can be calibrated to a warmer color.

“Modern LEDs can be controlled, and now have a much better color rendering index,” said McGeeney, whose organization aims to reduce light pollution. “When you use an LED at 2800 Kelvin, it's really a better and warmer light.  You can still see everything, but it's better for people’s health, and won't disrupt the night experience.

“There’s no reason for residential neighborhoods to have such a high color index,” he continued. “Ideally, it should be 2800. Three thousand is acceptable, but 4000 is definitely too high.”

Some research at Thomas Jefferson University has suggested that the blue light can be carcinogenic, he said, which is just one reason “why you want to control the direction of it, and make sure it’s not shining through people’s bedroom windows.”

But the color range of the new bulbs could be warmer, Waldron said.

“I think 3,000 would be better,” but for the city it’s always an issue of having to maintain more than one type of light bulb,” he said.

According to Waldron, cooler light can work well on a commercial street like Germantown Avenue, because it makes the warm light you see coming from inside the building windows appear much more inviting.

Still, the 16,000 lumen 3000 Kelvin bulbs that are planned for new fixtures on Germantown Avenue will likely produce a glare, he said.

“That range and that color could work, but not in those fixtures,” he said.