Henri Matisse, a dollar, a postcard, and a custody trail

I drove home thinking how wonderful it was to own a card once held by the immortal Henri Matisse – one on which he had warmly inscribed thanks to a person who had contributed, even in such a humble way, to making his dream come true. I vowed to always cherish it.

Henri Matisse, a dollar, a postcard, and a custody trail 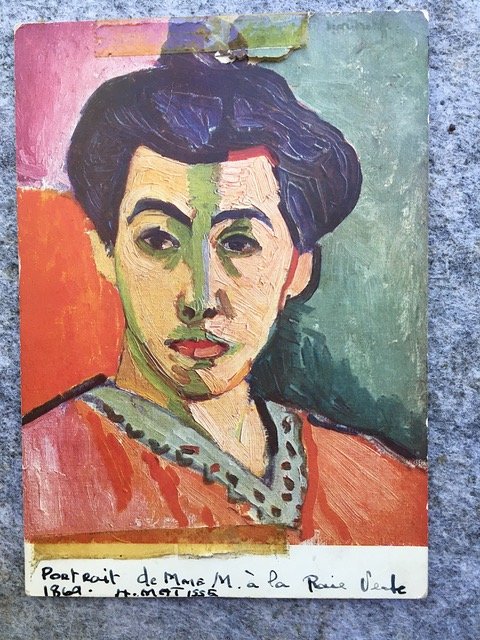 A postcard from Henri Matisse dated 1950, with a portrait of Mrs. Matisse, 1869. The painting so shocked the world the critics called Matisse a "fauvist," i.e., a wild animal. Matisse signed his name to the small white space at the postcard's bottom edge. 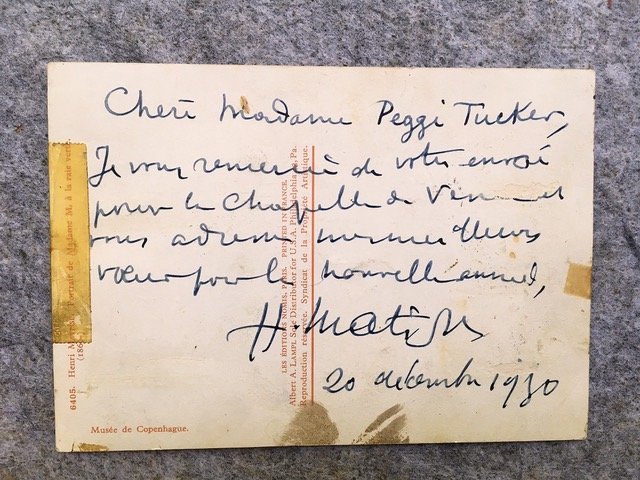 Matisse wrote a personal inscription to Madame Tucker, thanking her for contributing to the Chapelle du Rosaire de Vence.
Previous Next
Posted Friday, May 14, 2021 10:17 am
by Hugh Gilmore

In 1950, Margaret Tucker, a middle-age widow living in Greenwich Village, NY, sat down and wrote a brief note, put one dollar in the envelope with it, and mailed it to Henri Matisse, the great French artist. The money was a contribution to one of Matisse's greatest projects, a chapel inspired by the Dominican nun who had once been his nurse and model when he was near death from cancer. The nurse's name was Monique Bourgeois and she had responded to his advertisement seeking "a young and pretty nurse." Bourgeois tenderly took care of the ailing Matisse, and took great interest in his work. He has described her as "a magnificent person" whose devotion touched him deeply. For a while she became his model and several drawings and paintings of her exist as a testament to their bond. In 1946 she began another lifepath, becoming a Dominican nun. Their friendship continued. In gratitude, at the age of 77, at her request, Matisse designed, developed, and painted the incredibly beautiful Chapelle du Rosaire de Vence on a hillside overlooking the city of Nice in southern France.

While living there, he received the letter and contribution from Peggy Tucker. Mrs. Tucker, the Greenwich Village widow, had been married twice. Her first husband was an Australian painter of note named Ambrose Patterson. In the famed Salon d' Automne of 1905 he had five paintings in same exhibition where Henri Matisse and the "fauves" stunned the art world. A year later, Margaret and Ambrose married and in 1910 they had a daughter, Yvonne, born in Australia. In 1915 they had moved to Hawaii. At some point Margaret Patterson met Herman Tucker, a handsome young U.S. naval officer stationed off Honolulu. They fell in love and married in 1918. She took his name. Her eight-year-old-daughter, Yvonne, was sent to live with Herman's sister in Flourtown, Pennsylvania.

Margaret's second husband, Herman Tucker, had probably been a compelling person to know. A Harvard dropout, he was in the first party to successfully summit Mt. McKinley in Alaska. He had also accompanied the Yale Expedition that "discovered" Machu Picchu in the Peruvian jungle. Devoted to radical causes he was a member of the "Wobblies" (the Industrial Workers of the World) and died in 1920 when he fell out of an airplane while distributing leaflets over a workers' camp out west. Margaret never married again. She moved to Greenwich Village, did secretarial work, and actively supported many artistic and cultural causes.

Many years later – 2001, I think – I was shelving books one day in the used book shop I used to run on Chestnut Hill Avenue here in town and heard the door opened behind me. I turned and saw a small, lively, gray-haired woman step in. Before I could greet her, she said, "Are you the owner?" Yes, I said. "Well, I've got a lot of books I want you to come out and see." She wrote her name, Yvonne Patterson, and phone number, and left.

That name, Yvonne Patterson, meant nothing to me at the time, but over the next few years and a number of trips to her home I got to know her a bit and buy a number of books and other stuff. Yvonne was 91 when I met her and lived to be 100. She was impish, funny, occasionally sharp-tongued, and, when relaxed, quite charming. A dancer from childhood, she had left for New York in her late teens and joined the Radio City ballet. In the mid-1930s she became one of the original George Balanchine dancers in his School of American Ballet. For the rest of her life, she danced and taught dance professionally.

Once, when I was over at Yvonne's house, she brought out a manila folder, saying, "Anything in there interest you?" It contained some correspondence her mother had received over the years. One of them was a postcard from Henri Matisse dated 1950. The pictorial side showed an image of Mrs. Matisse with a green stripe down her face, the painting that had so shocked the world the critics called Matisse a "fauvist," i.e., a wild animal. Matisse signed his name to the small white space at the postcard's bottom edge. On the letter side, Matisse wrote a personal inscription to Madame Tucker, thanking her for contributing to the chapel at Vence and signing his name boldly. Yvonne let me buy it.

I drove home thinking how wonderful it was to own a card once held by the immortal Henri Matisse – one on which he had warmly inscribed thanks to a person who had contributed, even in such a humble way, to making his dream come true. I vowed to always cherish it.

But, of course, life has ways of making "always" terminate sooner than one hopes. Last August I blew out enough birthday candles to make me start wondering who should take custody of the objects I love. This past January I started transferring some. Last week I offered the Matisse postcard for sale on eBay.

Online auctions are a harsh world, one where other people are more inclined to notice blemishes than their owner does. Peggy Tucker – excuse me: Madame Tucker – had cellophane-taped the postcard in an album. The old tape stuck to the card. But neither she nor I revered the little card as an investor's token. Its ownership had been born of emotional and artistic awe, not dollars. I got lucky anyway. I don't mean financially. I sold it for $120.00 – loose change in the autograph world. But enough for me, because of the story the woman who bought it told me afterward.

We'll call her Carol and here's what she told me:

"Thank you for your very kind letter telling me about the provenance of the post card. In response, let me tell you a little bit about me and my interest in Henri Matisse:

“When I was 8, my parents took my sister and me to France. It was hot, cloudy and still when we drove from Nice to the Chapel, and I was a hot cranky child when we arrived. I wanted air conditioning, I wanted lunch, I took one look at this initially austere space and was ready toleave immediately. Then, the sun came out and poured through the stained-glass windows, throwing patches of color all over the painted tile murals and it was as if I had been hit by lightning. I fell in love-deeply profoundly and forever with Henri Matisse and his genius that had created this magical space.

“I spent decades building a collection: lithographs, drawings, his illustrated books and pages fromthem, some ephemera such as yourpostcard, and a massive reference library including gallery catalogues and other period material. I concentrate on the last 15 years of his life; which is well known to have markeda spiritual, and artistic rebirth for Matisse. But for me, the meaning is far more personal.

“When my adored husband died after a harrowing and wrenching 5 year decline, I did not think thatanyone or anything could begin toheal my shattered heart. I was hanging my entire Matisse collection, and looking at them everywhere and every day and tellingmyself that when Matisse was so very ill and suffering terribly, hecreated these joyous pieces. And,that he somehow pushed through hispain, through the war, through everything, and created an alterna-ive world where it was always beautiful. I figured that if he could do it, so could I. After Covid, if I couldn't go to the museum, I could live in one.

“I think Henri Matisse saved me from going into the pit. When I leave the planet, my collection willgo to a museum in its entirety. The postcard you just sold me will be part of that bequest.”

Hugh Gilmore is the proprietor of Gilmore's Books of Chestnut Hill and formerly operated an antiquarian bookstore on Chestnut Hill Avenue.