During her many travels (France, Italy, Greece, Scotland, and Canada), she studied at Rhodes University in South Africa for one year, which she devoted entirely to classes in drama. 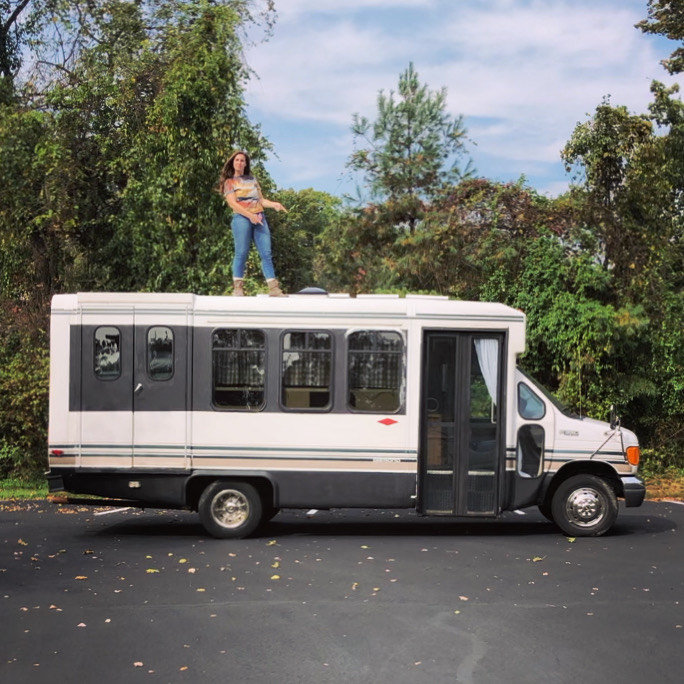 Rachel stands on the 2003 Ford E350 Shuttle Bus she will drive across the country to visit all 63 national parks. 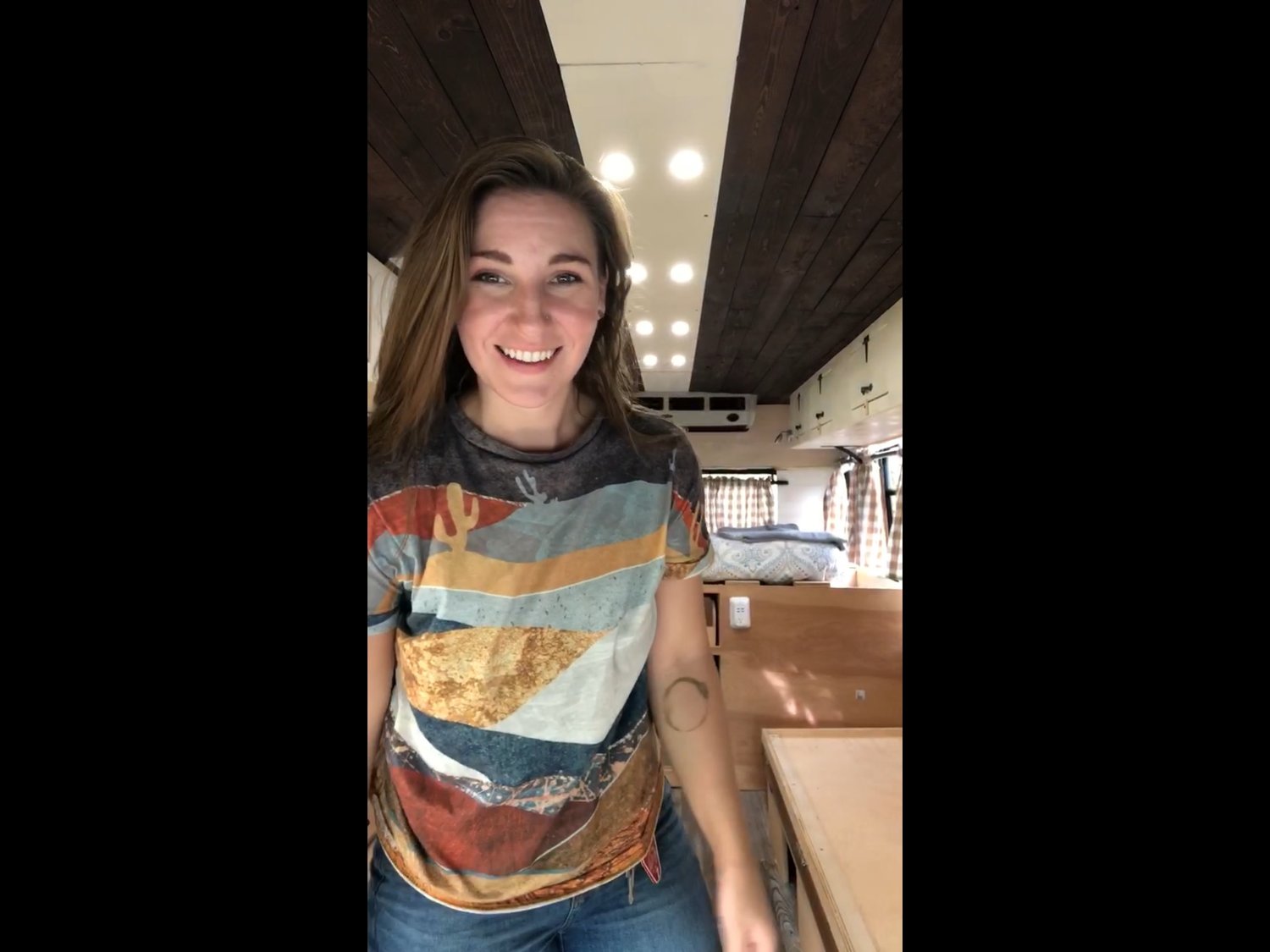 The Stagecrafters' actress Rachel Dilliplane, who starred in the recent production of “The Revolutionists,” will soon be leaving in her shuttle bus with her cat in hopes of visiting all 63 national parks, which she expects to take three to five years. (Daryll Morgan Photography) 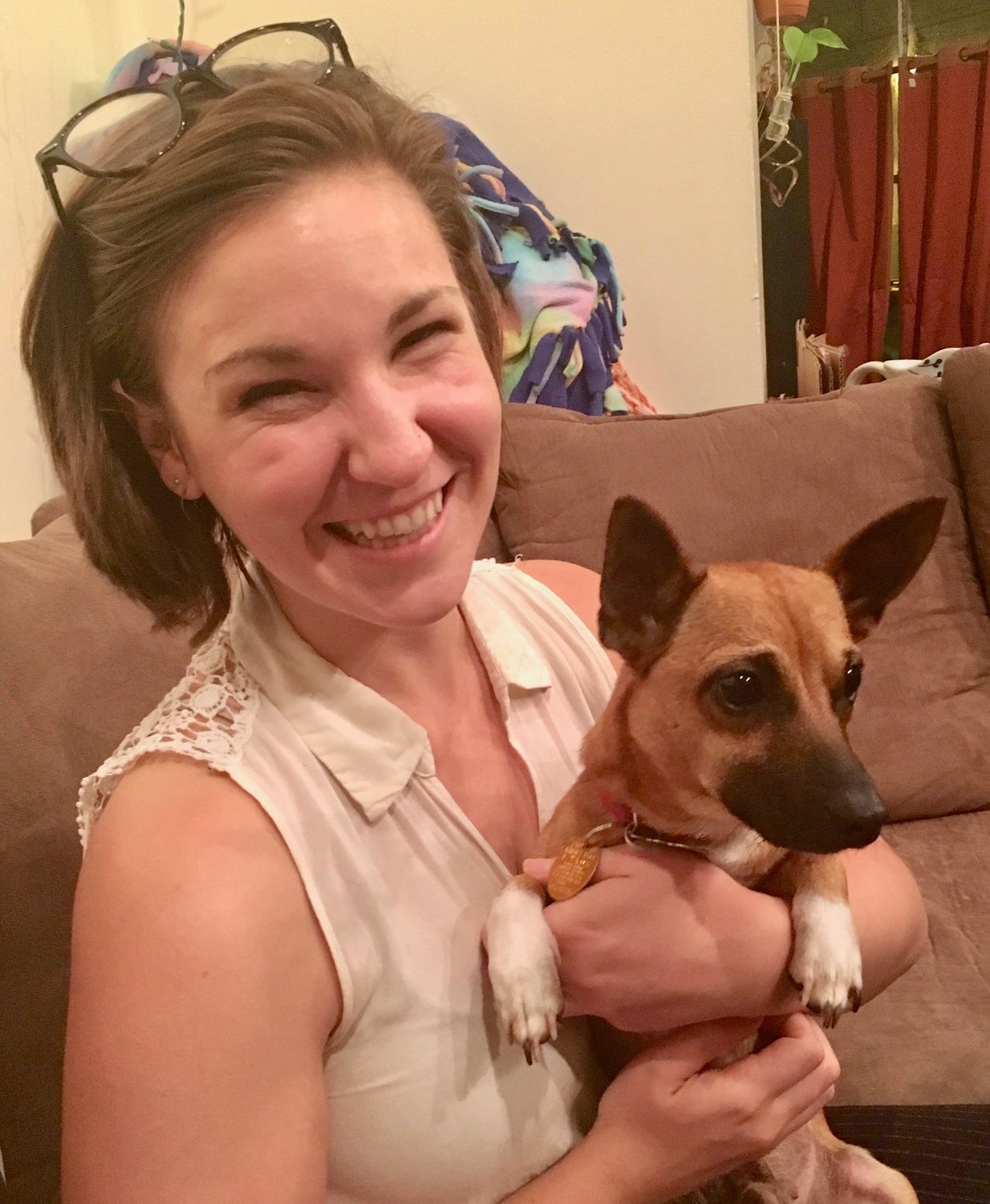 When Rachel Dilliplane was a member of the Virginia Repertory Theatre, she went to the Richmond SPCA to pick up this dog, Russ, who appeared in the company's production of “The Curious Incident of the Dog in the Nighttime.”
Previous Next
Posted Wednesday, April 6, 2022 6:00 am
by Len Lear

Local actress Rachel Dilliplane, who starred in Stagecrafters' recent production of “The Revolutionists” (the Local's theater reviewer, Hugh Hunter, wrote that “the deadpan anger of Rachel Dilliplane's Charlotte Corday is close to the comic invention of 'Cabaret.'”), has an incurable case of wanderlust.

During her many travels (France, Italy, Greece, Scotland, and Canada), she studied at Rhodes University in South Africa for one year, which she devoted entirely to classes in drama. She admits that being 8,000 miles away from home was “way out of my comfort zone!”

During that year, “The highs were high, and the lows were low. One week you're on safari, bungee jumping, diving with great white sharks and having unforgettable home-cooked meals with incredible people. The next week, someone steals your wallet, and you'd give anything for a hamburger or a hug from your mom.

“Overall, though, it was an extraordinary time,” Dilliplane said. “While I was there, I auditioned for a student improv comedy troupe and got in! Performing with that troupe was the cherry on top of an unforgettable experience ... I saw some of the most daring, uninhibited and thought-provoking theater I'd ever seen during my time in South Africa.”

After college, she moved to Richmond, Va, for an internship with Virginia Repertory Theatre, which turned into a salaried position that lasted four years. Then she took a job with Lake Dillon Theater Company in Silverthorne, Colo. But the pandemic hit and closed the theater, so she moved back in with her parents one year ago.

Dilliplane has wanted a life in the theater since she was a small child. “My first grade class performed (what could loosely be defined as) a play for the entire school,” she said. “The basic premise was that our class accidentally travels back in time. My best friend begrudgingly played a stegosaurus, and I played a student who had been sent back in time. What can I say? I was hooked!”

What is it about the theater that is so appealing? “Definitely not the money,” Dilliplane said, “It's almost inexplicable. I'm just drawn to it and recognize that I am my most complete self when I'm rehearsing or performing. For me, it's how I travel, how I experience the world, how I learn. As a kid, one day I wanted to be a baker, then a doctor, then a princess, then a spy. Because of the theater, I have been princesses, various animals (a cow, a frog twice), historians, special agents, assassins, reporters. I've been in sword fights, passionate romances and thrilling mysteries. Through theater, I have lived several lifetimes of adventures.

“My family has always been very supportive, and I've always felt encouraged to pursue what makes me happy. They've driven countless miles to watch me perform some pretty weird roles, and they have often been the ones laughing or clapping the loudest in the audience.”

Since the pandemic forced live theater into hibernation, Dilliplane has been forced to reassess her future. She wound up getting into the voiceover industry - which includes audiobooks, podcasts, radio, museum narration, e-learning, cartoon characters, voicemail, and commercials. The biggest names she has recorded with have been DELL Technologies and PayPal.

But Dilliplane's most exciting role should be “Ms. National Park Expert.”

In August of last year, she bought a 2003 Ford E350 Shuttle Bus from Facebook Marketplace which has “only” 50,000 miles. She will be on it some time this year, on her way to visit all 63 national parks with her cat, Leonardo DiCatMeow. “He's 7 to 9 years old. I found him in a dumpster in Richmond, and he's the best travel companion I've ever had,” she said.

Dilliplane expects the adventure to take from three to five years. “I want to see absolutely every weird and wonderful thing this country has to offer,” she said. “Another motivating factor is that my parents both have a ton of memories of visiting national parks with their parents when they were younger. They still prioritize making trips to these natural wonders. The way they talk about these places makes me curious to see them myself.”