Chestnut Hill author, singer/songwriter and professional storyteller Ted Fink, 81, left a copy of his fifth novel, “Pebbles in the Fire,” which came out in March, for me in the Local office with a handwritten note saying in part: “I hope you find this story a fun read.” 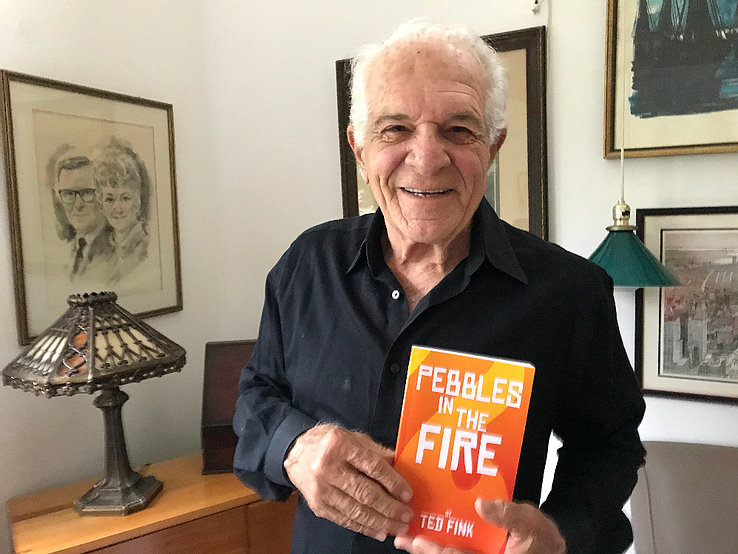 Chestnut Hill author Ted Fink holds a copy of his fifth novel, “Pebbles in the Fire,” which came out in March. It is a dark but very compelling tale of cruelty to children in a Central American country.
Posted Thursday, June 24, 2021 10:30 am
by Len Lear

Chestnut Hill author, singer/songwriter and professional storyteller Ted Fink, 81, left a copy of his fifth novel, “Pebbles in the Fire,” which came out in March, for me in the Local office with a handwritten note saying in part: “I hope you find this story a fun read.”

I loved Fink's previous novel, “The Incident at Parkside,” so I was looking forward to “Pebbles,” and there are a great many things I can now say about it, but none of them is “a fun read.” After all, the compelling story that takes place in Nicaragua revolves around a young boy who was sold into the cruelty of slavery at the age of 5, a poor farmer who desperately wants to have his toddler son's cleft palate repaired, and a young American girl taken in by a band of rebels after her parents were killed by federal forces. Does any of that sound like “fun” to you?

As usual, Fink had me turning pages because of his mastery at plotting and dialogue, but I must say it is very difficult and unsettling to read about the brutalities visited upon these children, knowing that this work of fiction has its counterpart in real life every day in many parts of the world, including the U.S.

The title, “Pebbles in the Fire,” according to the author, “reflects the poor people who are trying to cope with a world aflame.” Since the story is so realistically portrayed, I was somewhat surprised to find out that Fink has never been to Nicaragua, has never has any involvement with non-profits that try to rescue children from enslavement and has had no involvement with Operation Smile, the wonderful organization that provides free facial surgery for impoverished children with facial deformities and which plays a key role in the book.

How then did this story come about? “A friend of mine,” Fink replied, “a videographer named Bill DuPertius, was hired by Operation Smile to do a documentary in 1989. He took his stepson Jesse Selber, a senior  in high school, with him to help with the shoot. Jesse told me the  story of the farmer and his son. I gave Jesse a mention at the end of the book. At the time he was a fantastic young artist. He became a physician, plastic surgeon and is now a professor at M.D. Anderson Cancer Center. Around the same time I read an article in the New York Times about kids sold into slavery. I wrote a short story in 1991, and the story stayed with me for years.”

When asked how the scenes could be created so realistically, Fink said that in addition to Googling, “I have traveled a great deal, especially in my younger days. China, Vietnam and Cambodia, and I’ve seen the poverty that treats people like pebbles in a world that doesn’t really care. Here in the U.S., cleft palates and many other maladies are fixed at birth, but in the poor countries of the world that is not the case.”

Fink’s family moved to West Oak Lane when he was 12. He went to Wagner Junior High, Germantown High, Temple University and Miami University. He has a BA in creative writing and a Master's degree in educational administration.
He also has an extensive restaurant background. Every summer staring in 1953 he worked as a busboy at a 20-room hotel in Atlantic City, and starting at age 16 he worked weekends as a banquet waiter in Philadelphia hotels — the Bellevue, Warwick and Sheraton. “In 1958 I was making more money as a banquet waiter on weekends than my father was making working 40 hours a week as an electrician.” In 1964, Fink built The Rib Ranch Restaurant on North 22nd Street, three blocks from the old Connie Mack Stadium.


Many people in Northwest Philly also know Fink as a singer/songwriter and storyteller. He has written and recorded many songs and created and hosted the Chestnut Hill Singer/Songwriter Slam for four years. He has played theaters, clubs, private parties and cafes. A few years ago he did a one-man show at Stagecrafters in Chestnut Hill for two nights that drew about 300 people

Ted and his wife of 50 years, Ruth, have a daughter, Juliet, 44, who works for the city of Philadelphia as a Digital Inclusion Fellow and was recently named on Technical.ly Philly’s 20 RealLIST Connectors; and a son Matt, 38, a city solicitor. Ted and Ruth have lived in their Chestnut Hill home for 38 years.

For more information, visit tedfink.com. Len Lear can be reached at lenlear@chestnuthilllocal.com